Mahatma Gandhi famously informed his countrymen that Work was Worship. He was trying to impress upon a nation inherently given to holidaying and indolence that independence would not come on a platter. It would take a great deal of diligence and hard work. He was also aware that the dignity of labour was a concept largely alien to his audience (a condition that persists to this day).  He used the line of reasoning that was most likely to strike a chord with a populace that had been steeped in religiosity for millennia: he simply equated work to worship. The hope was that the people would take work as seriously as they took worship. When Independence Day did arrive, it was a good slogan with which to begin the task of building a modern nation. For good measure, Jawaharlal Nehru added the injunction, “Aaram haram hai”, perhaps because he knew his people well.

Decades have elapsed since then, putting us in a vantage position to view the progress made. If the whole shebang is to be put in a nutshell, it is this. “Work is Worship” has been altered slightly.  In an archetypal illustration of the topsy-turvy transmutations that inform and control daily life in modern India, the epigram has been smoothly transposed into “Worship is Work”!  And it is hard work, indeed. It is difficult to estimate, with any degree of reliability, the fraction of the total cumulative time and effort of the people of India that is devoted (quite literally) to worship and worship-related matters in all their aspects, forms and manifestations.  But it is certain to be a very significant fraction.

Whole volumes can be written about the generally ludicrous, often grotesque and, not infrequently, alarming situations that result when a billion-plus population engages in the bizarre shenanigans that accompany the pursuit of ritual. Capsizing overloaded ferries and buses, collapsing bridges and fatal stampedes are just a small (though tragic) part of the scenario. But it is not my purpose here to discuss these matters in any detail, or to rail against religion and its rites. Rather, it is to make some observations (hopefully, in the clinical manner of entomologists reporting on their subject matter!) on a particular microcosm of the general scenario. This is the one that best epitomises “Worship is Work” — namely, the observance of that marvellous occasion called ‘Ayudha Puja in the Office’. The dedication, diligence and seriousness with which this affair is conducted in most public institutions and offices in India would make even the most ardent Japanese workaholic give up the race and retire into private life. It is also a perfect illustration of the casual and complete mixing up of personal and professional matters that characterises all our affairs.

Preparations start early. Weeks before the event, remarkably complete and up-to-date lists of staff members (which are otherwise virtually impossible to obtain) miraculously find their way into the hands of the chief organisers. These public-spirited folks tear themselves away from their regular work to trudge tirelessly to every nook and corner of the premises seeking out donors. They do not rest until hunger and attrition have forced the last hold-outs hiding in the toilets to come out and hand over their ‘voluntary’ contributions to the kitty devoted to the noble cause of conducting the puja in a ‘fitting manner’ — that is, on a scale grander than that of rival sections, divisions, labs or departments, as the case may be.  Frequent, lengthy and solemn discussions are held by various unofficial committees on the organisation and logistics of the forthcoming event. The ready cooperation of all concerned, regardless of their actual persuasion, makes one wonder why there is so much fuss about the waning of secular values. The prospect of any diversion from actual work evokes universal enthusiasm, transcending all divisions based on caste, creed and community that are the despair of the well-wishers of this nation. Enviable attention is paid to detail. This is all the more remarkable because a near-total LACK of attention to detail in almost all matters, from tree-cutting and road-laying to neurosurgery and reactor-building, is arguably one of the most conspicuously generic characteristics of the nation. An air of anticipation is palpable as the day approaches. 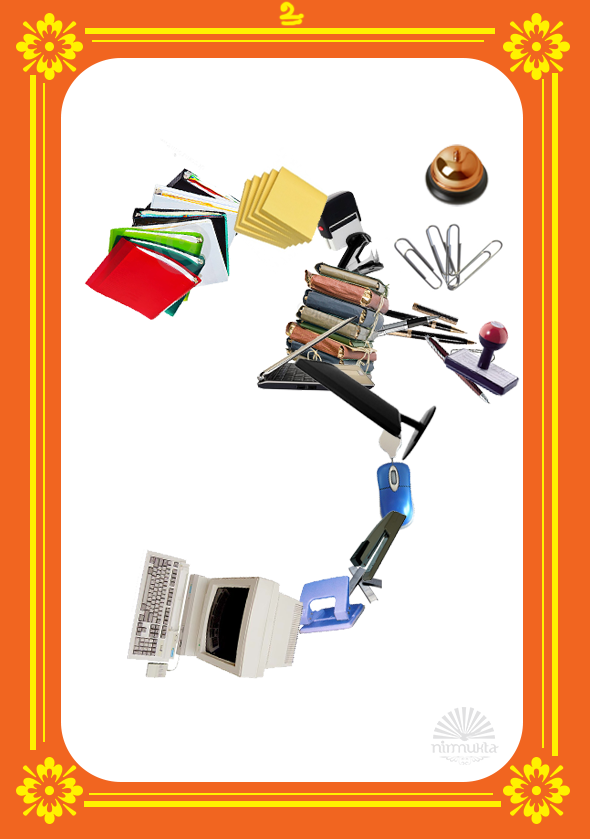 Needless to say, the event falls on a holiday — declared by a benevolent government to facilitate the ‘celebration’ of the puja without the hindrance of regular work. [To digress for a moment: In fairness, it must be admitted that this thoughtfulness on the part of the government is not unique to the occasion. It extends to every other imaginable reason (and many unimaginable ones as well) for declaring a holiday. Among these are floods, earthquakes, riots, rumours, rain, drought, tsunami, heat waves, cold waves, or just waves of popular sentiment, elections, political processions, political rallies, the arrest of political leaders, their release from prison, their impending or actual demise, statue-garlanding, purported statue-desecration, and of course the festivals and holy days of every religion or faith evolved anywhere on land or at sea from approximately 100000 BCE to date. But that is a longer tale of woe.] On the other hand, it goes against the very grain of the national work ethic to indulge in work of any kind on a holiday — including, naturally, the work of worship itself. The puja is therefore ‘celebrated’ in the afternoon of the day PRIOR to the actual holiday.

But it would be naive to imagine that normal work would go on, say, till 4 p.m. on this day, leaving an hour for the puja before people leave for home at 5 p.m. That might be the assumption behind the official sanction for the puja, but it is far from what happens in practice. The start of the actual festivities soon slides down to around lunchtime, since several pujas need to be conducted in any self-respecting office or lab or department. After all, no section would like to be perceived as lagging behind any other in manifest devotion. Moreover, these pujas have to be conducted serially rather than in parallel, to enable the full participation of everybody in each event. Now, it should be obvious to any thinking being that pujas in the office cannot be events as impromptu as tea-drinking in the office. Careful and elaborate preparations are needed, to ensure that everything goes off well. It is therefore imperative to set things in motion as early in the day as possible. Naturally, this involves dedicated hard work on the part of all the organisers and their helpers in each section right from the start of the day. What with all the tidying up to be done, the machines and equipment to be washed and wiped, the decorations to be put in place, the puja paraphernalia to be set up, and so on, it is sensible to eliminate the interference caused by normal work by suspending such work altogether. As machines, equipment, tools and instruments are meant to be the objects of attention on the occasion, it is only reasonable to switch these off completely well in advance, giving them anywhere from 8 to 24 hours to cool off sufficiently before the puja material can be applied on them. Since filing cabinets, cupboards, fax machines and desktop computers take the place of machinery and equipment in administrative offices as the objects of worship, these too are shut down and locked up well ahead of time, so that they are not inadvertently overlooked during the puja. Fine fools everybody would look, if a computer in the finance section crashed the day after Ayudha Puja simply because somebody had forgotten to propitiate the deity residing in it, causing it to play havoc with the next month’s salary disbursement. And with the major festival season right around the corner, too!

The actual puja reveals unexpected facets of some people in the office. Persons who might be regarded as deadwood, ordinarily contributing little or nothing (except gossip and politics, perhaps) to the official tasks and objectives of the institution concerned, turn out to have  hidden talents. They stride about from room to room, lab to lab, puja to puja, with solemn devotion writ large upon their faces. When the  occasion demands it, they step in most readily to function as substitute priests. The air of busy concentration and palpable religiosity they exude is awesome to behold. In the face of such tangible spirituality, any queries that may arise in petty minds regarding small matters such as official work (or rather, its total and extended cessation) are automatically forestalled. When the larger issue of guaranteeing the proper functioning of machinery and equipment for the next year is being settled at a celestial level, not to mention the smooth opening and closing of cupboards, desk drawers and filing cabinets during that period, what’s a couple of days of work?

After the puja comes the distribution of the offerings. Thin polythene bags are much in evidence, the number of these carried home by an individual being a silent proclaimer of the level of his piety and involvment. The gaffe of the few misguided misanthropes who gave the pujas a miss and spent the time in their offices is magnanimously overlooked, and the polythene bags due to them are delivered at their desks (provided, of course, they have coughed up their contributions). The lights are turned off, and the offices, labs and departments are locked, well before the end of normal working hours. After all, the next day is a holiday, and if a weekend happens to occur in another day or two, there are innumerable ways to extend the holiday into a de facto vacation lasting several days. (Banks, in particular, have perfected this into a fine art. Yes, banks, too, observe and conduct Ayudh Puja, and with a good deal of gusto. After all, they deal primarily with instruments — financial instruments — don’t they?) And so anotherAyudha Puja comes to an end, a great time is had by all, and the strenuous task of converting work to worship has been successfully carried out once more, in the relentless march of the nation to superpower status.