Editors’ Note: This article earlier appeared in the November 2012 edition of Design for All, a publication of the Design for All Institute of India.

A recent trip I made required me to fly out of Thiruvananthapuram  (or Trivandrum as it was called in the days of the British Raj and for some more years thereafter) and I thought it would be nice to be  able to see Kovalam beach. But this required my knowing in advance  that I could stay in an accessible hotel. So I thought that surely the  Taj chain of hotels would be able to  provide me with the needful,  and I emailed the Taj group with my query as to whether I would be  able to access their hotel on my wheelchair. I got a polite response  from some central source to the effect that they were `cc’-ing their  response to the concerned hotel who would be getting in touch with  me. Three days went by with no such attempt to get in touch with me. So I tried calling the hotel in Kovalam and was told politely but  firmly that unfortunately every room required you to climb about 10  steps!

So I had to take recourse to the unfortunate truth that very often, the only thing that works in India is to go through high-level contacts. In this case, I turned to my brother who had been a senior and respected executive with the Taj group (before he saw the wisdom of moving to a life in academia) and asked if he would use his contacts to find if indeed there wasn’t even one room in the entire hotel that would be accessible to a person on a wheelchair. Within a couple of hours, he called back to say that the person in  charge of this hotel happened to have been a trainee under him in  his days with the Taj Hotels. And within an hour after that, I got emails from this `ex-trainee’ and the manager of the hotel to the effect that there was in fact exactly one room in the entire hotel that was accessible to a wheelchair and that I could have it for the night I wanted it! 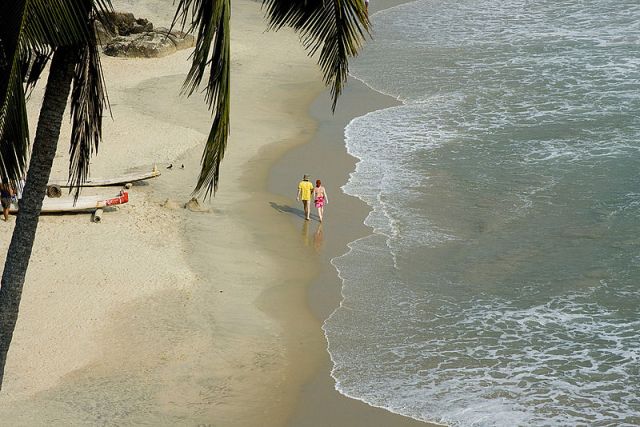 And so it transpired that my wife and I did indeed spend an afternoon and a night at this hotel. Our brief sojourn there started when we arrived there a little after noon and decided to have lunch immediately after checking in and before proceeding to our room. The one restaurant inside the hotel building was on a higher floor which I could access only by using a service elevator and being led through long corridors and inner bowels of the kitchens of the hotel. Then we emerged into the familiar opulent ambience of the restaurant, where we met and were welcomed by the manager of the hotel, and soon after we were seated, the chef came to our table and recommended, then prepared some of the most delicious sea-food I have eaten! After a lunch that can only be described as over- indulgence on our part, we were ready to retire to our accessible room for a post-prandial nap! So we once again went through the kitchens and the service elevator and back out past the lobby to our room which I could access through the French window overlooking the garden – but only after it had been opened by someone after having climbed up a slope and then down the mandatory four steps to open the front door!

After having rested our over-fed bodies, we wanted to go down to the beach. So we went back up to the lobby to and out how this could be done, and the woman in the lobby told us very courteously that there was a nice sea-side restaurant we could go to for dinner. When quizzed about accessibility of the restaurant, she said although there were some 3 to 5 steps to get into the restaurant, we could sit on a lawn overlooking the sea where a table could be prepared for us.

When we got down there, even after being directed to the lawn, we found that some number of steps had to be negotiated in order to reach our table. Of course, many people solicitously hovered over us, while a couple of people lifted the wheel-chair up to the desired plateau, and we spent a pleasant evening savouring the smells and sounds of the surf at Kovalam. 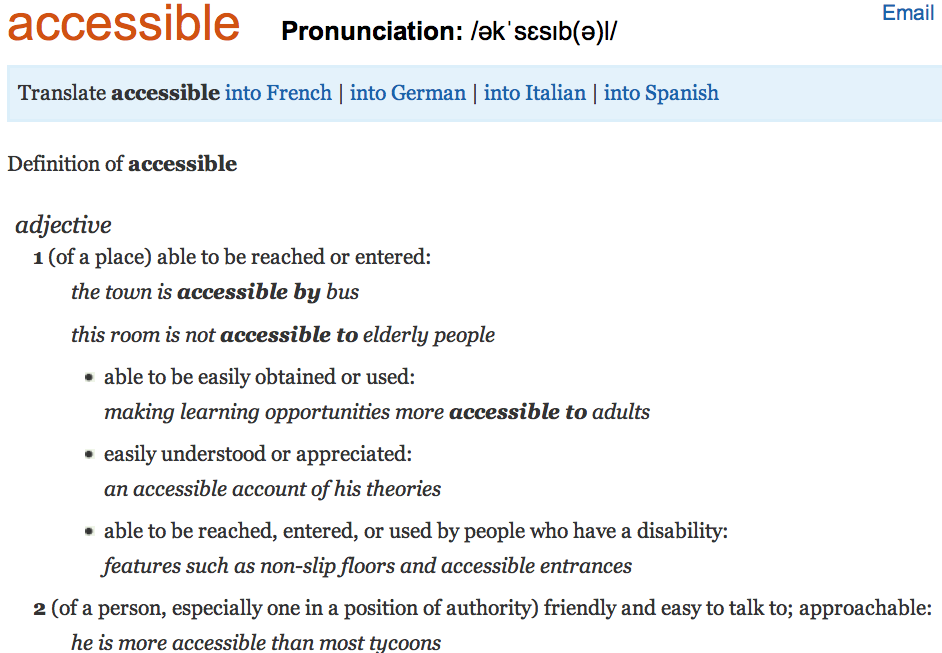 ‘Accessible’, as defined in Oxford Dictionaries (via http://oxforddictionaries.com/)

Everybody at the hotel was most helpful and courteous, but that does not take anything away from my point that this nice time could not have been had if I had come alone or was absolutely incapable of walking even a few steps (which is fortunately not the case). As I keep trying to say, people like me need to be able to at least occasionally not feel dependent on other people. However willing you may be to carry me up some stairs, or come and open the door of my room for me and let me in, or to even take me to the men’s room when I need to go, surely it is not hard to see that people like me would like to do at least some things (in fact, as many things as possible) by ourselves.

Not just `handicapped people’, surely there must be any number of aged people with creaking knees who must visit such hotels. Can they enjoy the luxury afforded by such hotels only after paying the toll of climbing some n steps? Anyway, not having a regular elevator in a hotel like this borders on the absurd.

The ideology of universal design strives to ensure that designs take into consideration that that which is being designed can be utilised by people with or without disabilities – in short, by everybody, and does not exclude anybody because of faulty or inadequate planning. If the premiere hotel of our country – to whom the cost of providing their guests with a luxurious and comfortable stay is never a constraint or a consideration (the cost of installing an elevator can be recovered from the charges paid on ten rooms!) – cannot or will not pay attention to universal design and the need for including all our people in all aspects of our life, then the concept of UD will unfortunately be consigned to the fate of remaining nothing more than a figment of someone’s fevered imagination.