Find it difficult to keep New Year resolutions? Want to lose weight and plan for it but have failed more than once? Finding your wardrobe full but frequently find lack of event-appropriate clothes? Let’s get introduced to instrumental rationality, a concept that might be the key for succeeding at such tasks.

What is Instrumental Rationality?

The definition of instrumental rationality, as given by Keith Stanovich in his book titled Robot’s Rebellion, goes as follows

Instrumental rationality is behaving in the world so that you get exactly what you most want, given the resources (physical and mental) available to you.

It is clear from the definition that Instrumental Rationality is all about finding ways to achieve the defined goals. Given the resources, an instrumentally rational person chooses the most optimal route to attain the sought goals. The concept sounds extremely simple and obvious. But research shows that humans typically suffer from dysrationalia and frequently show disability in aligning actions with desired goals. That is the reason why it is easier to decide to lose weight but rather hard to implement it. Reflection on instrumental rationality can uncover the pitfalls in our thinking that can help us rectify this behavior. But before we get into more details we need to first understand its limitations.

It is important to understand that instrumental rationality is not the same as plain rationality. Instrumental rationality is the ability to use available resources in accordance with beliefs to achieve the desired goals. But it leaves the value system, i.e. beliefs and desires, unchallenged. It does not bother whether the value system in itself is rational or not. Thus a person who believes s/he is a dog might be considered an instrumentally rational person as long as the person acts in accordance with the held beliefs and desires. By being instrumentally rational one might get what one wants, but one needs to be sure what one really wants. Evaluation of beliefs, desires and their consistency has to be done to be a rational person. Consider a typical 80s Bollywood movie where a character is so much after riches that he loses all his near and dear ones in that process and ends up alone and unhappy. What went wrong? S/He went after money, but actually wanted money and love. Instrumental rationality failed because of incorrect goals.

Why is Instrumental Rationality needed? 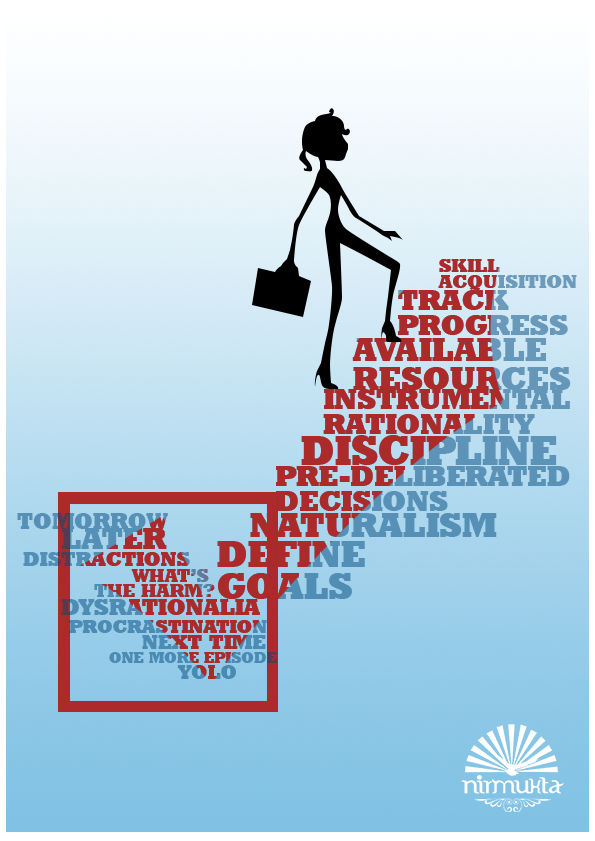 Naturalism, a perspective that humans are fully caused beings, has interesting insights to offer with respect to instrumental rationality. Naturalism rids us of our belief in a ‘supernatural soul’. Naturalists can no longer rely on some contra-causal free-will that they can exercise and behave differently under exactly same circumstances. It leads to a raised awareness of the critical role that our environment plays in governing our actions. Being conscious about this fact and incorporating it in the belief system can significantly improve our chances of achieving our goals.

I would like to present to freethinkers an interesting personal revelation about effect of naturalistic perspective on rational thinking ability. I claim that rational analysis is useful only at the right time and right place, and it is not always a good idea to think. This would sound against tenets of freethinking, but its not so. We rarely bypass thinking process and act solely on emotions, but we need to accept the fact that emotions can tamper our process of thinking. Humans crave to rationalize their actions, and thinking at the wrong time can lead to pseudo-rationalizations. The reason people mostly fail at resisting temptations or tackling procrastination is seldom because some chemical process overpowered the conscious brain rendering a person as just plain emotional being. It is mostly because even the thinking brain starts rationalizing in favor of a temptation or procrastination.

A weight loss plan gets ruined because the rational brain starts shouting “how bad can a scoop of ice cream be” or “don’t I deserve to indulge myself” or “we live just once” or “just this time” or “what harm can biscuits do.” These pseudo-rationalizations are bound to happen when certain emotions get triggered. The best way to tackle such a problem is to not rely on thinking on such occasions, but rather adhering to a discipline. The thinking part should be done when brain is free for rational reflection. Once the plan has been drawn, sticking to the pre-deliberated decision with discipline is the best bet at success. At a restaurant pick the already known healthy dish without looking at the rest of the menu. Plan your grocery shopping in advance when you don’t have chips and fries right in front of your eyes.  Plan your meals upfront, do not decide them on the table at the last minute. By not thinking when one is surrounded with temptations and distractions, there is lesser likelihood of giving in to pseudo-rationalizations. Thinking might be second nature to freethinkers, but using it when one really can and controlling it when one can’t is being instrumentally rational.

Leave a Reply to sweet 15 invitations in spanish X