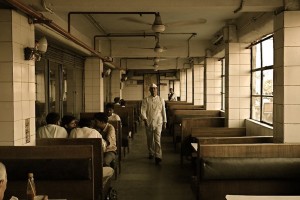 We talked about our lives in the real world, in a religious society. Himel described how religious organisations try to impose their version of morality on others, and this led to a discussion on absolute religious morality, as compared to consensual, inter-subjective morality.

This led to discussion on casteism and how scriptures fail horribly on modern standards of morality. The discussion drifted to different topics back and forth, our educational system, basic human rights, nationalism, democracy and secularism.

Rishi Das presented an article from FIRA, about how india is pseudo-secular and what we should do about it.

We discussed Nirmukta’s objectives, various plans and goals were discussed, however we agreed that, before moving onto doing something concrete, focus should be on developing a regular membership.

After the meeting was over, some of us (Himel, Lalit, Sanatan, Ujwal, and Amit) felt that we still had some more juice left. So we moved through Connaught Place, looking for a somewhat quiet place until we settled down at Cafe Coffee Day for a second round of discussion. This one was more informal and candid than the previous round.

We returned to the topic of “current education system” and everyone discussed their own college life. It was a nice mix: a fresher, a final year student, a 2012 passout and a well settled scientist.

As we slowly opened up, topics became more diverse, we discussed songs we like to listen to, movies, latest technological advancements, Pranav Mistry and of course recent Dawkins documentaries, classic Hitchslaps, and latest videos of QualiaSoup and TheraminTrees.

The very courteous staff of CCD, CP(B-block) waited patiently, laughing occasionally at our jokes, as we chatted for over an hour over coffee and pudding. At the end of the day, strangers went back as buddies. Physical meets are a completely different experience from online discussions. We urge all readers to join us for our next meet – we meet on the last Sunday of every month. Join the group now!

Notes and relevant links:
Last meet report
Delhi freethinkers Facebook group
Delhi freethinkers on big tent
Our complete network
Richard Dawkins on absolute morality
No country for wheelchairs
What is Nirmukta and what do we plan to do
A useful 100 point resource for fence sitters
Chaser’s War on Everything- The Secret
The thrilling potential of SixthSense technology by Pranav Mistry