The edifice of modern physics, which we humans can be justly proud of, would have been unthinkable, even impossible, without the help and insights the scientists got from recognizing the role played by symmetry (and broken symmetry) in shaping the fundamental laws of Nature.

Long before any science, man was fascinated by symmetry (Klaus Mainzer).

Symmetry, as wide or as narrow as you may define its meaning, is one idea by which man through the ages has tried to comprehend and create order, beauty and perfection (Hermann Weyl).

Fundamental symmetry principles dictate the basic laws of physics, control the structure of matter, and define the fundamental forces of Nature (Lederman & Hill).

As far as I see, all a priori statements in physics have their origin in symmetry (Hermann Weyl). 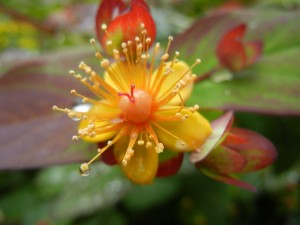 We speak of symmetry in any situation in which we can rearrange things (positions in space, values of quantities in time or direction, etc.) and still get the same answer for any physical question we may ask about the rearranged system. In the picture above, the flower has ‘5-fold rotational symmetry’: If we rotate it by 2π/5 or 72o, we cannot tell whether the rotation was indeed performed or not. The flower is ‘invariant’ under this ‘symmetry operation’.

We see so much symmetry in Nature, so the question arises: Why is that so? In my recent book Latent, Manifest, and Broken Symmetry (2011) I have argued at length that the basic underlying cause of this is simply the second law of thermodynamics (‘minimization of free energy’). I shall not repeat the argument here in this short post.

But we also see so much BROKEN SYMMETRY (or reduced symmetry) around us. It is the second law again. If a system can lower its free energy further by making a phase transition to a lower-symmetry phase or state, it would do so. The familiar example is liquid water freezing to crystals of ice on cooling to 0oC. Liquid water is highly symmetric: It looks the same from any direction, meaning that it is invariant to any rotation around any axis of rotation; it is isotropic. By contrast, a crystal of ice has a far lower degree of rotational symmetry; it is anisotropic. 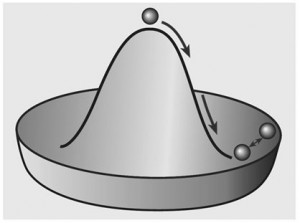 The moment of the Big Bang (cf. Part 2) was the moment of highest symmetry: No structure, no preferred direction, no inhomogeneity. Then a very brief interlude of cosmic inflation occurred (cf. Part 8),  during which even the tiniest of quantum fluctuations got amplified hugely; this created gradients. The emergence of matter from the earlier radiation field was a symmetry-breaking phase transition. The radiation field was translation-invariant, and the appearance of matter broke, among other things, the translational symmetry. A field called the Higgs field has been postulated in cosmology to understand these phenomena. This field breaks the symmetries of the interactions among the elementary particles, and gives the particles their mass.

Nature abhors gradients because they embody states away from equilibrium, meaning that there is scope for lowering the free energy. Phase transitions occur to lower the free energy, and there is usually a concomitant lowering or ‘breaking’ of symmetry.THE ENTIRE HISTORY OF THE COSMOS IS ONE BIG SAGA OF HOW SYMMETRY-BREAKING TRANSITIONS HAVE OCCURRED AGAIN AND AGAIN.
[Sometimes it is not very appropriate to use the term ‘phase transition’; a better description is ‘bifurcation in phase space’, but that is only a technicality.]

Broken-symmetry-considerations occupy centre-stage in theoretical physics. Particularly in particle physics, progress often means postulating, and then discovering, a new broken symmetry. Why only a broken (or ‘hidden’) new symmetry? Because an unbroken symmetry would have been manifest already, and would thus be old symmetry rather than new symmetry. Broken symmetries in Nature are not always very obvious; one has to go looking for them.

Nature seems to take advantage of the simple mathematical representations of the symmetry laws. When one pauses to consider the elegance and the beautiful perfection of the mathematical reasoning involved and contrast it with the complex and far-reaching physical consequences, a deep sense of respect for the power of the symmetry laws never fails to develop. (C. N. Yang, Nobel laureate)

Thou hast no faults, or I no faults can spy;
Thou art all beauty, or all blindness I. (Christopher Codrington)