What was I doing at 14? Nothing of consequence. I was at secondary school, studying in the 8th standard. I had changed schools, enrolling in a residential school away from my home city. So at 14, I was struggling to adjust to a new environment, new school and new faces, whinging a bit, eventually settling down to a humdrum life of mandatory study time, mandatory play time, and mandatory chore time, and – oh, yes! – trying to deal with raging hormones, inevitably doing something so stupid that I can look at those incidents only with sheer embarrassment and a shake of the head.

And by that same age of 14, in a different corner of the world, this amazing and courageous young woman, Malala Yousafzai, had already expressed the pain of her people through her words (written under the nom de plume of Gulmakai and published by BBC Urdu in 2009; excerpts here); spoken out for children of her generation, articulating the need for education in her part of the world (see video below); won the first National Peace Award by Pakistan government in 2011; and for all her efforts, she – all of 15 now – has been shot in the head – shot in the head! – by religion-soaked, stuck-in-the-Dark-Ages, pathologically-misogynistic, gun-wielding ignorant scum, collectively known as the Taliban. I know! Life of a teenager, right?

By virtue of valiant and skilful efforts of doctors and surgeons across two continents, military neurosurgeons in Rawalpindi, Pakistan, and trauma specialists at the Queen Elizabeth hospital in Birmingham, UK – no thanks to any god(s) anywhere – she is going to be fine. The UK daily, Guardian, reported on October 19, the Malala retains her higher neural functions, and will possibly make a complete recovery. She can’t talk yet because of a tracheotomy tube, but is able to stand with help and write. She has expressed a desire to share with people her details and her gratitude for their support.

Why is the Taliban so afraid of this young teenager, that they must try to silence her voice permanently? It is because what Malala represents: an inspiration to countless others. Her act of defiance of the barbaric brutality of the Taliban, her brave refusal to be cowed down by their threats of violence and death, her strength of character and determination – all these have the potential of taking on the form of sustained movement of opposition to the Taliban. Shooting to murder Malala was a desperate act of intimidation, but only betrayed their cowardice and laid bare their frailties for the world to see and mock at; they are so dead scared of this one adamant young woman that they wish to target her again should she survive. Deluded, uncouth morons! Do they imagine, for one moment, that eliminating one Malala will stop the eventual uprising of many more like her, frustrated with the misogyny and oppression entrenched in their patriarchal, tribal customs, disappointed in their government and its inability to protect them and their loved ones, and desirous of wresting their basic Human Rights?!

Malala, named by her father after an Afghan national folk heroine who fought alongside a Pashtun general in the Battle of Maiwand against British troops in 1880, grew up in an über-conservative, patriarchal society in a troubled part of the world, the Khyber Pakhtunkhwa province of Pakistan. Despite being a witness to the atrocities perpetrated by the Taliban, having her school closed down by Taliban decrees and her family displaced by war in the Swat Valley, Malala never gave up hope and courage, becoming a fearless activist for her cause, education, especially education for girls in her region. Where did she so much strength? Writes Adam Ellick, who made a documentary named “Class Dismissed” in 2009 on some of the most critical days of Malala’s life (see below), about her father, Ziauddin:

Her father’s personal crusade to restore female education seemed contagious. He is a poet, a school owner and an unflinching educational activist. Ziauddin is truly one of most inspiring and loving people I’ve ever met, and my heart aches for him today. He adores his two sons, but he often referred to Malala as something entirely special. When he sent the boys to bed, Malala was permitted to sit with us as we talked about life and politics deep into the night.

After the film was seen, Malala became even more emboldened. She hosted foreign diplomats in Swat, held news conferences on peace and education, and as a result, won a host of peace awards. Her best work, however, was that she kept going to school.

In the documentary, and on the surface, Malala comes across as a steady, calming force, undeterred by anxiety or risk. She is mature beyond her years. She never displayed a mood swing and never complained about my laborious and redundant interviews.

But don’t be fooled by her gentle demeanor and soft voice. Malala is also fantastically stubborn and feisty — traits that I hope will enable her recovery.

The world, too, awaits with bated breath. 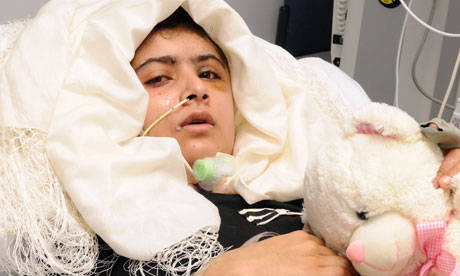 Malala Yousafzai recovering in a hospital bed. Image via The Guardian; links to source.

This article originally appeared on the author’s blog, Oh, The Humanity of it All.

Leave a Reply to suirauqa X