This meeting was conducted to discuss the agenda for the coming meetup scheduled on 7-Oct. 4 members (Ikram, Nayeem, Sarath and Varun) showed up to the discussion and we sat down in the outdoor section of Lamakaan. Since most of us met for the first time, we had introductions, and proceeded to discuss the agenda and other high-level details of the Hyderabad FT group. As unpredictable as Lamakaan is, everyone was asked to leave as there was some rock concert scheduled an hour later. So we went around and sat down in an eating joint in GVK One Mall. Lots of diversified ideas were proposed on the philosophy of the group, how to conduct meetups, general agenda need to be followed in the meetups, the scope of the group , and possible challenges to raise it to a global level. After good amount of brainstorming, we all agreed on the following norms to be maintained in the group

Overall, it was a nice discussion, given most of us were first-timers in the group, and we all got motivated to pursue this journey to maintain the group and improve it. We would be meeting again on 7-Oct with full-pledged objectives and agenda

When we planned to host the meetup for Hyderabad Freethinkers, we were a bit skeptical about how much interest it would generate in the group and how many people might like to turn up for the event. Moreover, since it was the first meetup with the newly added members organizing it, we wanted to discuss the bigger picture of Objective, Preamble and what to present in the meetups for the group. We decided that it would be good if the meetings have a touch of professionalism and agenda to carry out, so that we can make the best of the time and have a qualitative discussion among the members.

Mr.Shariff Gora, the renowned rationalist, was kind enough to attend the meeting, despite his busy schedule. He was very inspiring, working tirelessly at an age of sixty plus, opening up to us about his life, path towards rationality and the challenges he faced to sustain his ideology, and ironically, to live in the way he wanted to. He is an epitome of simplistic, yet powerful humanism, encouraging us throughout the session to make a difference in the people around us.

This meet saw an attendance of 7 members, which was decent, and we started off with our Introductions – About oneself, Profession, Interests & Hobbies, journey towards Rationalism, and any affiliations/membership with other Rationalist or Secular Humanist bodies. Mr.Shariff’s introduction was so intense, that others also started to open-up with their stories in detail, bringing a deeper level of interaction among us.

During the introductions, we discussed on Relativism, Objectivity of Truth, role of Empiricism in fact-finding, Inspirations to create a cult/religion, Literary significance of religious scriptures, Purpose of human life, role of Arts in improving quality of life. Nice and Well-though points were made, and all of us were impressed by the level of thought our members have been putting into the discussion. We also discussed on how to expand the group to a more global level, getting affiliated with existing national-level Rationalist and Secular Humanist bodies. 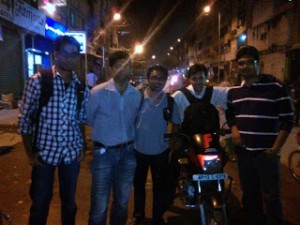 During the conclusion of the meeting, we agreed upon the following points

All in all, it was a very good meetup with Mr.Shariff giving us nice pointers, and interesting discussions unfolding in the group, it turned out to be a pretty interesting evening. This report is just a brief gist of what happened, and it is in no way a substitute to a physical meet and won’t explain in detail to the members who missed the meetup. So join us for the next meetup and experience for yourself the stimulating discussions and debates happening in the group