‘The 19th chennai freethinkers meet was held at the Malles Manotta conference hall in T Nagar on 30th September 2012 at 2.30 PM. Three talks – by Prof. Narendra Nayak, President of FIRA, Sonja Eggerickx, President of International and Humanist Ethical Union (IHEU), and Babu Gogineni, Director of IHEU were planned for the event. All of them were on their way to Tanjavur for another event and had an one day stop-by in Chennai. We decided to utilise this and organised the event in accordance with their travel plans.

There were quite a few new members for the meet. Usually we would have a “ragging” session where the new members introduce themselves and share their thoughts on Freethought, Humanism, Atheism etc. It really helps break the ice as members share heartfelt stories of religious indoctrination and abuse, things they would not be able to share anywhere else. Not to mention the hilarious anecdotes they would narrate which fills the hall with laughter. However, for this meet, since we were running short on time, we decided to skip the introduction session and go straight to the talks. So with the hall nearly filled to capacity, about  thirty participants eagerly waited to hear from the speakers.

Prof.Nayak spoke about the need to reach common people with ideas of rationalism. He narrated various incidents from his decades long career of traveling the length and breadth of the country to urge people to think critically and rationally through his miracle debunking programs. He insisted that though science education is important, the easiest way to dispel so-called miracles by alleged godmen is to perform them oneself. In his usual style, Prof.Nayak narrated how he could explain in detail to a superstitious person the principles of Leidenfrost effect and how it helps people walking on burning embers so that they don’t burn their feet. But after all the explaining, the person would still demand Prof.Nayak to walk on the embers himself and show. He noted that the reason why the new generation of godmen in the country were largely refraining from performing such “miracles” is probably because they realised that their tricks will be exposed by rationalists. 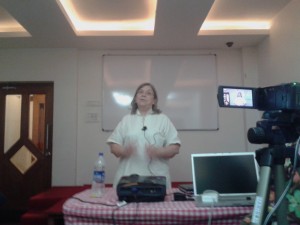 Sonja Eggerickx spoke about her experiences with Humanist and Ethical education for children in Belgium. She narrated how the humanists fought to bring in a secular syllabus and non-religious schools in every town in Belgium. She shared her thoughts on teaching children secular non-confessional ethics, which is the equivalent of Moral Education in Indian syllabus but without any religious undertones. She admitted that she is not happy with the term “non-confessional” to denote secular ethical education as it has a negative connotation. She said, during public meetings, she does not refer to people as Religious and Non-Religious, but as Freethinkers and Non-Freethinkers. During Q and A she touched on the topic of Euthanasia which invited a lot of questions from the audience.

Taking Humanism to the common man and woman was the topic Babu Gogineni spoke about. He said that though it is necessary to have academic discussions and debates about Humanism, Atheism etc, they are not of much use unless they somehow help the citizens. He narrated various incidents where superstitious beliefs have been used to oppress and intimidate people and how the ideals of Humanism have actually saved lives. He urged people to not hesitate in calling themselves Humanists and Atheists. A lively Q and A session followed the talk. 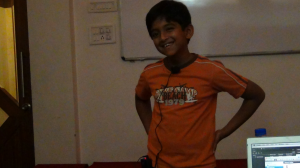 Apart from the three seasoned speakers, we had an impromptu speech by Arun Gogineni, Son of Babu Gogineni. The 8 year old regaled the audience by volunteering to talk on the topic of ‘Humanism!’ He said Humanists don’t believe in god; they are nice people and work very hard. He signed off by saying that when he grew up, he wanted to be like his Dad. There was a Q&A session too when a member asked him, “Inspite of studying well, if I don’t get good marks in my Exam, what can I do? Is there a short-cut to get good marks?”  Arun confidently answered “No, you have to work hard. There is no short cut.”  Watch out for this  budding Humanist speaker.

On behalf of Nirmukta, we would like to thank all the four guests who, despite their hectic schedule and in spite of being sleep deprived, took their time to talk with us. It was heartening to hear from the audience how much they enjoyed all the talks and how they wanted more. With the satisfaction of having conducted another successful meet, we dispersed, with the promise of meeting again.

Link to videos of the three talks:

Narendra Nayak on ‘Experiences with Rationalism

Sonja Eggrickx on ‘Humanistic and Ethical Education in Belgium’

Babu Gogineni on ‘Making Humanism Relevant to All’