After a long hiatus Pune Freethinkers joined for the fourth time this year for a group meeting on Saturday, 15 September 2012.Few of us first met at Cafe Coffee Day but once folks started coming in, there was no place for everybody to sit. We planned to move to Sambhaji Garden across the street. The weather was pleasant with a slight drizzle. We settled in the garden and formed a circle so that each one of us could see the others while talking. It was a ’round garden conference.’ Slowly all the folks joined in – Ameet Singh, Mujtaba Lokhandwala, Anand Mangnale, Nagendran Krishnamoorthi, Rajeev Bg, Amrish Gaikwad, Subodh Bhagat, Satish Pagare, Arkadeep Ghosh, Deepak Pande, Sukoon Shete. And of course Avadhoot Velankar who called in to say hi to all since he was stuck in Mumbai.

It was really encouraging to meet new folks for the first time – Ameet, Amrish,Nagendran, Rajeev, Arkadeep. This was also the first time that we met fellow freethinkers who are not from Pune but from Selam(Nagendran), Mysore(Rajeev),W. Bengal(Arkadeep). We felt this would help us get a different perspective from different regions within India. 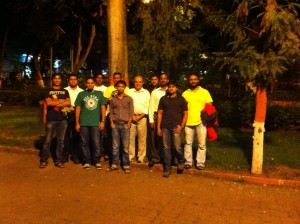 We had a discussion about how each of us came out as a rational thinker and as an atheist. Nagendra shared his childhood experiences as to how his father imbibed rational thinking since childhood. He was infact introduced to all religions in a very rational way. Rajeev shared stories of one Mr. Mr. (oops Shri Shri) and how that organization is organizing mass delusions in Mysore under the umbrella of a movement in the form of pravachan, bhajan etc.

Ameet, the most vocal and I think the most travelled, shared his experiences in J&K. And how people under the name of God/Religion are indoctrinated and are growing hatred in that region. It was interesting to hear him. He shared some radical ideas on how we should move forward like the OUT campaign, going all out with Posters, Banners, Pamplets etc. Interesting thought.

Arkadeep started with a God theorem and later with his own logic disproved the existence of God. He shared his willingness to organize debate amongst college students on rational thinking. Satish shared his experiences on how he was almost on the verge of believing when he was the most vulnerable (read crisis in career front). But then that only helped strengthening the disbelief.

Stories were shared by Rajeev, Deepak, Sukoo, Ameet about excessive rituals that they performed and how the futility of it helped their move towards rational thinking. Subodh shared his experience on how the need of the time is compassion and not hatred.

Sukoon brought up the point being discussed on Mumbai Freethinkers already about a joint meeting with Pune Freethinkers. Everybody seemed party to the idea. We are really looking forward to catch up with the Mumbai folks! We also discussed ideas about having private screening of documentary films like Anand Patwardhan’s “Ram Ke Naam” or his latest “Jai Bheem Comrade”. There are plans to start book reading during the meetings.

We encourage more folks to join in going forward. This meeting invitation was accepted on Facebook by 15+ folks as “will attend” and 15+ folks as “may attend”. So the expectation towards attendance was actually very high. Nonetheless we had a great meeting. Looking forward to more of you folks joining.

After around 2 hours of talking, discussing and getting to know each other, the Pune freethinkers dispersed. It was a nice fun event and we encourage all of you to join the group and start attending the meeting and interacting on the FB groups as well. This is also a great opportunity for networking with fellow freethinkers and sharing your ideas, views on rational thinking, atheism etc.,

Please join us at: https://www.facebook.com/groups/punefreethinkers/

21st March 2012 – We had a fantastic meeting! Lata Madam’s four students live demonstrated the tricks that are played by the “Godmen” to lure innocent people in their trap.  The live demo covered how “blood” is visible inside the lemon when its cut, making fire out of nothing, turning watered turmeric into “blood” red colour and what is eclipse.

There was an interesting discussion led by Mujtaba Lokhandwala, which explained why we don’t have eclipses quite frequently. What are the nodes – Rahu and Ketu. They are actually points where the rotation planes of earth and moon intercept  since they actually are not in the same plane, but at a difference of about 5 degrees.