(Report by Sanatan and Lalit)

The 11th Delhi Freethinker Meet (DFT Meet) was held on 15th September at the Indian Coffee House, Connaught Place, Delhi. This meet was long overdue and it happened finally thanks to the combined efforts of our members, especially that of Aastha. The primary objective of the meet was to get to know each other and to exchange thoughts. We started gathering at the Central Park but were then forced by rain to move first to a roadside shelter and then to Indian Coffee House. We shared our thoughts over coffee and sandwiches. 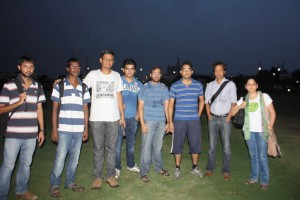 This meet saw an attendance of 13 members, which was a welcome change from our previous meets. However, more than half were first timers. The meet started with formal introductions and then moved on to current and random topics. We discussed about the recent anti-Islam video, about census and ‘law of attraction’ (‘The Secret’ by Rhonda Byrne). Since most of the members were first-time attendees the conversation was largely about how the group operates, how regularly the meets happen and what we want to achieve with this.

Delhi group has tried to spice up its meets before. We have visited the science museum; we have tried the spicy khan-chacha rolls; we have experimented with the “Skeptics in the Pub” format at Cafe Ziro; we have even been to an adventure park together. While all this has been great in attracting new members, we are yet to boast of a group of regular members which is a primary requirement to organize constructive meets.

Some members observed that frequently trying new places of meets, too much spontaneity in decisions and focus on attracting new members might actually be coming off as counter-productive.

It was decided that we will focus on development of group by increasing regular attendees as priority and defer all other plans for the future. To achieve this, we have decided to put some stability into our meeting venues and dates. For our regular meets we will try to meet at the same place for several consecutive meets and our main focus will be on:

These regular meets will work in tandem with other informal meets, to encourage new members and to keep the group ‘fresh’. 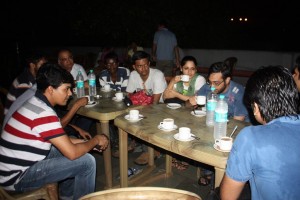 All in all it was an enjoyable meet for everyone, with rain adding a bit of adventure into it. All attendees promised to attend the next meet as well. This is only the second report of Delhi freethinkers, 10 meets after our first report, but we promise to write reports more frequently from now on, for record-keeping, and for those who missed the meet. However, as anyone who has attended our meets will attest to, online interactions can in no way substitute physical meets and no report can tell you what you missed. So join us in our next meets and experience for yourself the charged up atmosphere of discussions and debates.

Other regional groups of nirmukta