PGIMER,Chandigarh, a premier institution for medical education and research in India, is a  multi-specialty hospital with eminent clinicians on it rolls and is the center for Advanced medical care in the region. This institution organizes a general lecture on the first Saturday of every month inviting eminent people in various fields to share their thoughts with the faculty and students.

Mr.P.Khurrana a self proclaimed ‘expert’ in vaastu, astrology and black magic was invited to deliver this prestigious talk on the topic of Astrology, Dharma and Medicine  on the 1st of September, 2012 at PGIMER. It was certainly not the day for Mr.P.Khurrana,  who claimed to have a large clientele among the rich and the famous and dropped quite a few powerful names during his talk. His website http://www.astroindia.com/ informs that he is an ‘expert’ in a variety of fields like black magic, gem therapy, numerology etc

Being in Chandigarh on that day, I was keen to attend the talk and raise a few questions if allowed, and also find out how the talk would be received by the faculty of the institution. In the meanwhile, the stage had been already set by  a reporter of The Hindustan Times, Chandigarh edition who had already taken on the administration for this decision to invite such a person to one of the most prestigious medical institutions in the country. There were some quotes from the faculty as well as outsiders who had felt uncomfortable about this.

The Nehru auditorium of PGIMER was jam packed on that day with not a single unoccupied seat and people standing in the aisles. The director of the institution, Dr. Y.K.Chawla, introduced him to the gathering mentioning that it was to expose them to others’ point of view. (While the speaker could have his point of view about astrology and dharma it was not clear what point of view he could profess with respect to medicine. Anyway Dr.Chawla is to be appreciated for trying his best to bring such a person to the gathering). 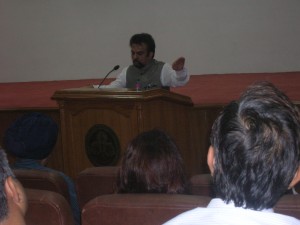 The exponent of astrology who incidentally charges astronomic amounts for his ‘consultations’ started with how astrology could help the physicians by instilling mental strength to the patients! He also dwelt on how though rahu and kethu were not planets they were ‘fixed points’ whatever that means! He spoke about how his ‘advice’ had benefitted VIPs like cricketers, politicians and actors and rattled off  names during the process! The wonder was that his book on black magic was not about black magic- it seems that he was against it and claimed that it was only in the mind. This was notwithstanding that he advises people about how to counter it! He informed the assembled doctors that he was working in conjunction with them and that he was also a part of the diagnosis and treatment.  He also cautioned the listeners against the evil effects of Mars (mangal) which was likely to cause accidents. He disclosed that the planetary configuration on one’s birth chart determines the profession that one would take up in the future. The doctors were also enlightened by him as to how they could use the astrologer’s services to counsel patients, particularly when the case was hopeless! In retrospect it appears that it was this gratuitous bit that must have irritated a good number of them.  He was quite short in his talk and then came the time for questions!

It was the question time that really did him in! He appeared to be banking on  the belief that as he was invited by the administration any awkward questions would be considered as an affront to them and hence  nothing awkward would be forthcoming. But the events that followed showed that he was totally wrong. Though there was a feeble attempt by the compere  to protect him by  announcing that priority would be to the queries from the faculty and if any time was left,  outsiders could ask questions.

The first shot was fired by a senior clinician who told him that all medical graduates were trained from day one on how to speak to patients and there was no need for him to introduce astrology into the picture under the guise of counseling them. A professor of neurology, Dr.K.S.Prabhakar, informed that they had given 15 horoscopes of normal people and patients with various conditions to an astrologer and asked him to identify those with diseases and he had failed miserably. Dr. Nirja Chawla, a well known gynecologist, also the wife of the director spoke about the Forer effect and how people tend to identify themselves with the traits of their ‘characters’ which were just some standard lines listed out in random order. She also stated that the film actors and cricketers have a risky career and hence are subject to insecurities and tend to consult soothsayers like him. One eminent pediatrician suggested that he prepare a forecast at the time of the birth of the baby and list out all the dates of future illnesses, career etc., so that the parents would be well prepared for them. One suggested that he diagnose disease through the birth charts and hence save the money spent on diagnostic tests.

I reminded him about his statement on determining the profession by the reading of horoscopes and challenged him to read the horoscopes of ten people and list out their professions. There was no reply from him and I went on to ask him whether he would substitute the entrance tests to professional courses with consultations of the astrological charts of the entrants. One activist asked him how people were assigned different signs of the zodiac with the software prepared by the different astrologers. I pointed out about his prediction that the UPA govt. would fall in 2007. His reply to that was that some people were concentrating on his few failures and ignoring his thousands of successful predictions.

The barbs aimed at him must have pierced him hard and hurt  him to the core  but he was trying to appear normal. He tried to defend himself by quoting so called VIPs who were taking his advice. He also tried to justify his various ‘remedies’ by mentioning how his son who was an actor attained success in his career by following numerology but it cut no ice with the audience. It was the general feeling that he was trying to pass off his so called ‘science’ as a genuine one.

He never expected to be grilled so thoroughly with so many probing questions. He was sweating profusely and had also come with bodyguards! He might have expected some problems from Tarksheel members but not the sort of response that was generated. The report by one of the newspapers stated that he went away without accepting the memento and that the memento was handed over  to him at the gate by the director.

The response to this would make the next quack who comes for a ‘lecture’ pretty cautious before accepting the invitation or looking for one! As stated before, the Hindustan times had carried a report about how such a specialist on ‘black magic’ and gem therapy was being invited to a place like PGIMER. On the day of the talk, the same newspaper had also carried a write up about how I was going to the talk to counter him.

Whatever was the response  of the talk  and irrespective of the sarcasms aimed at him , the speaker appeared to have achieved his objective. Though Dr.Y.K.Chawla, the director averred that inviting him to a lecture was not an endorsement of his views, it seemed that the main aim of this man was to have himself photographed, get a memento with his name inscribed and claim for the rest of his life that he had delivered a talk on Astrology, dharma and medicine to the faculty of one of the premier research institutions of India. In that he appeared to have succeeded and probably his consultation fee for his services would be on the way up. But the fact remains that it was a total flop show and it was clear that the so called practitioner of a dozen of these occult arts had failed miserably in predicting the outcome of his talk to an audience of this sort. It must be for the first time in his life that he had to face an audience of this type who exposed him totally and dissected him point by point and I was glad that I happened to be in Chandigarh on that day!

A report of this event in Hindustan Times (Chandigarh edition) titled ‘On astro turf, tough luck for Khurrana‘, dated September 2, 2012 can be read here.

Leave a Reply to Dave the Brit. X