Read Part I of the article – here. All articles in this series can be read in this page.

It is alright to hold an idea without forming an opinion or without coming to a conclusion.
(Image links to source.)

The challenges of Freethought parenting are many as the sphere of influence on a child includes parents, extended family, friends / peers, teachers, society, media etc., The influence is on the opinion as well as on the attitude of the child. If a child prematurely talks openly about a topic in which he holds a view different from what is commonly held, he may be made to feel guilty or made fun of or ignored. Unless the child is ready to defend his opinion with confidence, say, his lack of belief in a supernatural being, he should not be forced or encouraged to do so by his parents. It is important to teach children that it is alright to hold a thought / idea and play with it. This technique would come in handy when a child is eager to conclude about the existence of god. You can tell her that she need not be a theist/ atheist just because you are; instead she can decide for herself when she is older.

A child who displays a humanistic approach while amongst his peers may be unfairly ridiculed and bullied. We have heard from members who are college students that they feel uncomfortable when their friends indulge in slut-shaming but they find it difficult to speak up for fear of being scoffed at. The act of speaking up, even if a lone voice in the wilderness, can be cultivated, by encouraging the child to speak his mind and teaching him to take a stand. It would not solve all the problems caused by peer pressure but if he is prepared to face derision, he might find it slightly easier to handle the situation.

Sometimes children would not want their peers or teachers to know that their parents are atheists. This would probably be because religion is seen as normal and anyone daring to go against it would be slotted as bad or arrogant. Sometimes people are cruel and talk about hell to little children and that makes them worry that their loved ones might go to hell if they are non-believers. Treat it as an opportunity to talk about death and tell her it is not much different from before birth. Sometimes a child may act as if she is embarrassed about her parents’ atheism. It pays to empathize with the child and give her time and space to decide how she wants to deal with it. One thing that might help is to introduce other atheists in your circle. Knowing that there are similar people out there would help the child understand that there is nothing abnormal in being an atheist. Connect with fellow freethinkers by becoming part of our Regional groups and also join our Parenting group to discuss common issues.

If the other parent does not share the ideals, say, he/she is religious, the child is sure to face a lot of conflict. Even in ‘normal’ parenting issues, the parents are advised to present a single face and not send discordant signals to the child. Hence the difficulties in this case are acknowledged. If the idea is to avoid explicit confrontation the child can be exposed to skepticism in areas which are not contentious and rest on hope that the child will apply the same rationale to religion too. Of course a pluralistic approach is good especially as kids grow older and independent. It is not my case that you should give up on your principles to avoid conflict. What I am advocating is getting your way quietly without open confrontation – a fight between parents would have a very adverse effect on a child. And a child should never be made to choose between the parents atleast till they are old enough to understand. Stating your principles in an unapologetic tone and standing by it in a steadfast manner would send a lasting message to your child; of course you can argue to convince others but there is the danger of the argument degrading into unpleasant back and forth.

If either of the grandparents try to force religion on the child, take a deep breath and react keeping in mind that they are probably yet to reconcile that you have left the folds of religion and having probably given up on you, with ‘good intentions’ want to ‘save’ their grandchild. The only positive thing about this is that your child is going to learn something important from the way you deal with them on this issue. It is often far easier to prepare your child for the onslaught rather than asking your parents NOT to shove religion down the throats of your children. You can probably tell your child that their grandparents like most people believe in god and so would tend to talk about it. But the fact that you love someone does not make you responsible to follow whatever they say. And just because those who talk in favor of religion happen to be elders does not necessarily mean that they are right and that elders need not command automatic respect. This concept of not having to implicitly obey someone whom the child considers as ‘loving’ and ‘grown up’ will actually help the child to stay safe if at all he faces abuse from a known person which is most often the case. [1] 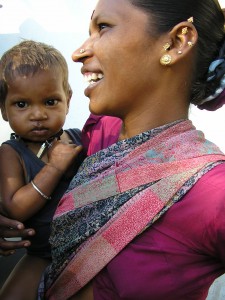 If you are angry/impatient/rough, the child learns to pick the negative reactions. While she sees you exhibiting all the distressing emotions she may probably see the grandparents pleading, trying to reason with you and expressing their love for your child. Put yourself in the shoes of your child and think which emotional state would be appealing to her. So it pays to be firm but pleasant and to prepare the child in advance. You will face the challenge not only from your parents but also from ‘well meaning’ friends, relatives and neighbors. The damage caused by good intentions is most often under estimated. Be prepared for such situations and practice to express your thoughts unapologetically in a patient and polite tone and with conviction. Being free of anger and rancor would help.

In the Indian setting, as often as religion, children seem to learn the inequality of the dreadful concept of casteism from the elders in their life. This is far more insidious. A casteist remark most often goes unchallenged. The caste privilege/complex and the us vs. them mentality is ingrained in the child well before she learns to reason out. It is the duty of a parent who aspires for Freethought to attend to such issues with equal alarm. The apprehensions of some children in the context of the Supreme Court’s decision to uphold the constitutional validity of the Right of Children to Free and Compulsory Education Act, 2009 was telling. [2] To quote from that article, a student said: “Our school has a certain culture and our parents have sent us here expecting children from similar backgrounds. It is a good thing that we will get exposed to people from different backgrounds, but we might not turn out the way our parents want us to. We perform Sandhya Vandanam at homes; we don’t bring non vegetarian food to school. Now we will have to face the world right away.” See the amount of prejudice the student bears against children who are ‘different.’ Imagine the hostility a child from a disadvantaged section would face if she is put in a classroom full of such privileged children. To add to this, discrimination by the school authorities themselves are cause for much worry. [3]

A serious concern of most parents is to find a school which has a secular approach. Finding such a school is next to impossible – even government schools have some kind of prayer sessions. The innocuous Moral Science lessons do a great disservice by linking morals with religion. Some of the stories told are so blatantly silly that a child who is sensitized and compassionate would laugh at ‘the moral’ sanctimoniously arrived at the end of the stories. Example – Ekalavya’s story in The Mahabharata.[4]

Most of the schools do not display the awareness that a child should not be indoctrinated with religion and instead take great pride in stuffing religion down the throats of children in the garb of imparting Indian culture.[5] There can be no escaping from this atmosphere at least in the near future. The secular alternative which is much needed is almost non-existent for now and therein lies a challenge for us. One option to overcome this or rationalize this would be to convert this challenge into an opportunity. We can see the School as a training ground for our children who will be exposed to a not very different social milieu when she emerges from the school cocoon. It will be very difficult for a child to confront her teachers and fellow students but we can tell her that religion happens to be the norm though the majority need not always be right. It is in this context that the Out Campaigns which hope to garner more visibility for atheists are imperative.

Media beams a lot of content involving stereotypes, discrimination and superstition. A child who is exposed to say, television, is bound to receive a barrage of misinformation. Children learn several patriarchal cues from the media, not to forget the ‘necessity’ of being fair and thin and having impossibly ‘gorgeous’ hair from the attractive advertisements. A woman is rarely shown as pursuing a career; she is either a teenager fixated with her hair and complexion or a perfect mother who is obsessed with her children and all the time aspiring for a spotless kitchen and toilet. If at all she dares to dream, she has to get her complexion right (meaning fair!) first. An adult who can point out the ‘unfairness’ of these advertisements may not be acknowledged immediately but there is a chance of it percolating in a child’s mind and manifesting when the child starts to think about issues seriously.

The harmless- sounding admonishment of a parent ‘Are you a girl? Why are you crying?’ would cause severe damage to a boy’s gender outlook. The poor boys who are slotted quite early into the ‘man box’ find it very difficult to extricate themselves from that cage. [6] It sure appears that the ultimate insult for any man is to be called a woman and the ultimate compliment for an efficient woman is to be called a man. How unjust is that and what systematic degradation of an entire gender! Even without realizing it, a girl child would feel diminished when she hears that.

The fair-dark duality is another sinister form of degradation – even in a routine school play teachers often mindlessly choose a fair child to portray the positive character and a dark complexioned child to portray the negative character. Such stereotyping settles deep in a child’s mind and is very difficult to get over in later life. It is also regrettable that what passes for comic relief in most movies is sexual harassment, fat-shaming and making fun of the differently abled.

Fed on such demeaning matter, how else will a child grow up other than being shackled in patriarchy and stuffed with stereotypes, mistrustful of those who are different and totally unfit to live in a pluralistic society. Even if you endeavor to bring up your child as ethical, gender-sensitive, humanistic and aware of her privileges, you would have to grapple with all that the society and the media throw at her. The onerous task then is to equip her to be discerning and to absorb the appropriate values which is the greatest challenge in Freethought Parenting.