The Higgs boson is in the news these days, but what exactly is a boson?

The Earth is a massive object, so it exerts an enormous gravitational pull on you. Have you wondered why is it that you do not get pulled all the way down to the centre of the Earth?! It is because of a principle in quantum mechanics, called the PAULI EXCLUSION PRINCIPLE, which says that no two electrons (or other ‘fermions’) can have the same set of ‘quantum numbers’, or occupy the same ‘quantum state’.

Any atom has a positively charged ‘nucleus’, and one or more electrons around the nucleus. Positive and negative charges attract, so why do not all the electrons get sucked into the nucleus, and thus reduce and eliminate the distance between the positive charges and the negative charges? This is because of another principle of quantum mechanics, namely the Heisenberg uncertainty principle (cf. Part 3).

The diameter of the nucleus is ~10-15 meter. The nucleus comprises of protons and neutrons, and each of them is ~2000 times heavier than an electron. If an electron were to get sucked into the nucleus because of the force of electric attraction (also called Coulomb attraction), it would be confined to a length of the order of 10-15 meter. This would be the uncertainty ∆x in its position. We can plug this into the inequality embodying the uncertainty principle, namely ∆x.∆px ≥h/(4π), to get the corresponding uncertainty in its momentum px. From this momentum if we work out the kinetic energy (= px2/(2m)), it turns out to be so large that the electron just cannot remain bound inside the nucleus (by contrast, a proton or a neutron can remain bound inside the nucleus because for it the kinetic energy is ~2000 times lower, because of the larger mass m).

So the electrons are outside the nucleus, and each atomic species (hydrogen, helium, carbon, etc.) has a distinctive distribution of electrons in specific orbits around the nucleus, and a distinctive ‘valence’ or proclivity for chemical bonding. The distinctive structure of atoms of any type (say carbon) is because electrons belong to a class of particles called ‘fermions’, and for fermions the Pauli principle says that no two of them can be in the same quantum state; so they separate out into more than one orbits. [The term ‘fermion’ is in honour of Enrico Fermi.] 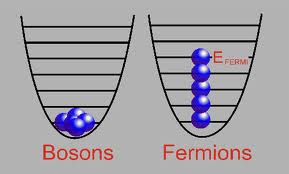 How do electrons get distributed in various specific orbits (or ‘energy states’) around the nucleus if they cannot all occupy the same orbit? The answer lies in the wave nature of electrons. An electron would tend to be as close to the nucleus as possible, but the smallest orbit can be that which allows a wave to close back on itself smoothly and repeatedly, as shown in the figure below, on the right.

The Pauli principle allows the smallest orbit to be occupied by two electrons, one with spin 1/2, and the other with spin -1/2. If there is a third electron, it must occupy the next permissible larger orbit, and so on. Only orbits which are compatible with the formation of ‘standing waves’ are possible. This is what defines the specificity or uniqueness of the orbits. 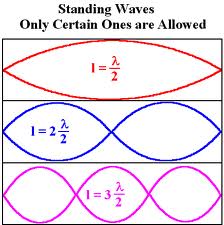 An atom of sodium has 11 electrons around the nucleus. The first orbit (or shell) can take only two. The next shell can take 8, and the 11th electron must go to the third shell. 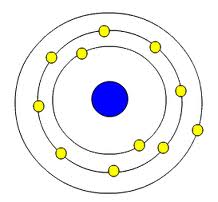 Similarly, an atom of selenium has 34 electrons, and has the distinctive electron distribution shown below. 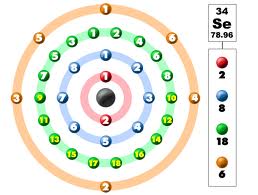 Protons and neutrons are also fermions, with spin = 1/2. By contrast, photons are bosons (spin = 1). The Higgs particle is expected to have spin = 0; that is why it is called a boson.

So, you and I exist because electrons and other fermions obey the Pauli principle, leading to the existence of distinct types of atoms and molecules. And it is the Pauli principle again which prevents the Earth from pulling us all the way down to its centre; electrons and other fermions (unlike bosons) just cannot come too close together in ‘phase space’.

Why are all fundamental particles either bosons or fermions? According to quantum ‘field theory’ (to be discussed in a separate post), when ‘matter’ particles interact with one another, they do so by the emission and absorption of ‘field’ particles. For example, the electromagnetic interaction between two electrons is via an exchange of photons. And all matter particles are fermions, all field particles are bosons.