The Chennai Freethinkers’ meets keep morphing over time. What started as a group of mostly lonely atheists who found each other through the world wide web soon moved on to explore areas of common interest. We quickly found  that we shared a passion for Science. The Nirmukta Facebook groups and the Nirmukta blogs gave us a lot of food for thought. We organized seminars on topics relating to Evolution, Alternative Medicine and Humanism. Then we held presentations on Paleontology, Logical Fallacies and a perspective on what freethinkers were leaving behind. Of course, once in a while we dedicated our monthly meets to exclusive interactive sessions. These were important, for it gave us space to open up and vent out in ways we could not do even with family members.

Time and again we realized that we had to educate ourselves on a number of issues like patriarchy, misogyny, casteism, class issues etc.,  We have members like Geeta Charusivam and Udhav Naig who serve as resource persons whenever we need clarifications on discriminations based on caste and on the need for affirmative action. We have quite a few feminists in our group who speak up whenever we come across gender discrimination.  Recognizing that ignorance is not an option, we are open to receiving ideas and willing to introspect. We strive to learn from the experiences of other groups all over the world. Every meet we talked, listened, questioned and came up with a lot of ideas. 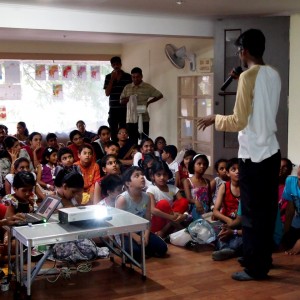 ‘A journey to the past’

Keen on sharing our love for Science with the general public and more importantly with children, whenever we got a chance, we grabbed it. Dr.Ganesh Veluswami participated in Radio programmes and talked about our rationalistic and humanistic point of view. Venkat Narayana and Soorya Sriram participated in a Television talk show (Neeya Naana) and strived to dispel myths that ‘dreams convey a message about the future.’ It was a brave attempt given the amount of misinformation and pseudoscience that was thrown around by many other participants. 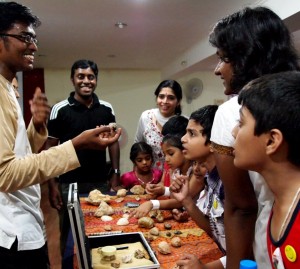 A display of fossils to an eager crowd

Nirmal Rajah made a presentation on 15th August on the topic ‘A journey to the past – a talk on fossils,’ to a group of children at Mythri Art Academy, Chennai. The children were completely bowled over and promptly named him ‘Fossil Anna.’ (Anna – elder brother in Tamil). After the talk some of the children stayed for more than an hour to talk to him and take photographs with him. This was the first attempt by Chennai Freethinkers to talk exclusively on Science topics to children and not mention religion or atheism even once. Dr.Ganesh has offered to make a simple presentation on Evolution. We plan to approach organizations conducting summer/holiday camps and offer to talk to children on scientific topics.

And then there has been a steady trickle of new members to our meets. We were happy that our community is growing – we realize that we have something special and that we should not fritter it away. Recently when a member shared a clip from the documentary ‘Seruppu’ (Footwear) in our Facebook group, we saw an opportunity. The issue of casteism is perceived in varied ways and the topic of affirmative action evokes mixed reactions. Not all of us realize what ‘privilege’ means and what ‘reality’ is for most of our compatriots. So we arranged for the screening of the film and an interaction with the filmmaker Amudhan on 12th August 2012.

A man engaged in making footwear in a dismal environment

The documentary gave us a jolt. It talked about the layers of casteism and the nuances involved; it recorded the lives of a group of people belonging to the Arunthathiyar community who are engaged in making footwear. In a painfully casual manner it showed the sad lives of the children who are denied basic education. It brought the topic of Dalit Christians into our conversation – dalits who had hoped to escape the shackles of caste discrimination found the same sorry state in Christianity too. It shocked us,  angered us and depressed us. Not that we were all in a cocoon and were totally unaware of people struggling with issues of poverty and caste discrimination. But to see it all up close was shocking. Immediately after the screening we were quick to react. Isn’t religion the real culprit we asked. Shouldn’t they be told about rationalism. Has anything been done to these people. Did you go back there after the taking the documentary? The questions flew thick and fast. In our enthusiasm we did not initially realize that the filmmaker had ably recorded the stark lives of a dalit community and it was not his responsibility to reform their lives nor to offer solutions. He had done a wonderful job of documentation and brought to light the plight of people living in unfortunate circumstances. It was to the credit of Director Amudhan that he handled all our questions with grace and composure.

In India everyone is born with a caste and is identified by it whether he or she likes it or not. You can change your religion but you cannot get away from your caste. It is better in urban areas but in rural areas the viciousness is real. He explained in detail how the caste system operates in villages. Geeta Charusivam added to it by sharing her experiences in working with an NGO. Every village has a place called ‘Ooru’ which is the main area of the village and a ‘cheri’ or ‘colony’ where the dalits live. There is an invisible line between these two areas and all the facilities like schools, public health centres and government institutions are located in the ‘Ooru.’ Dalits find it difficult to access these facilities and have to take massive effort to access the basic facilities braving not only the discomfort of distance but the cruel words and looks of those who consider themselves as upper castes.

Not much has changed for those people, Amudhan said. But then he was happy that there is a move to recognize the term Dalit Christians and the recognition that reservation needs to be given to them too is slowly dawning. Discrimination inside churches is also being recognized and some efforts are being taken by a few church personnel to counter them.

Maybe we were too quick to point out that religion was the offender and offered rationalism as a solution. And we were probably naïve to believe that the lives of those documented would be somewhat better now. It took some time for us to realize that dramatic changes do not happen and that there are layers and layers of issues involved. For a woman who complains of discrimination inside a church (such as not being given the opportunity to read the bible during a prayer as one women said in the documentary), atheism might be a liberation. But offering that as a solution might alienate them. We first need to ensure equality for her – or at the very least we should support those who fight to end such discrimination. This is one pre–competitive issue we need to address standing shoulder to shoulder with theists.

The interaction with Filmmaker Amudhan continued and the conversation covered a lot of ground. A couple of members said that they avoided speaking in Tamil Brahmin lingo. One member said this was because he feared ridicule and another said it was because he did not want to be identified as a brahmin though people invariably asked him if he was one and he felt violated. Amudhan responded by saying that the Brahmin lingo was associated with power/prestige and ridiculing it was an attempt at subversion by those outside the circle. Later on reflecting, I realized that, even in casual conversations it is effortless for Brahmins or other so called upper caste people to identify the caste label of their parents even if they rejected the caste identity. Even class inequalities are comparatively easily addressed. There have been atleast two instances of members talking about that part of Chennai they hailed from which was not considered ‘so upper class.’ But identifying as from the oppressed caste? Never! I don’t remember a single instance in a meeting when a member identified himself / herself as a dalit and it is definitely not for lack of dalit members in the group, speaking from my knowledge. What is it that makes them demur, we need to introspect. Of course, it is absolutely not necessary that a member needed to reveal if he was a dalit. What got me thinking was that frequently we have had members who confessed that they belonged to the communities that oppressed others and that they felt ashamed of it. They shared experiences about how when they were young they would address the elderly people from the so called ‘low caste’ who worked in their farms/houses by name and without respect. They felt sad about it and said they have changed those habits now. I hope for a day when members from the oppressed communities come out openly and talk about their experiences. For it is these shared experiences and shared learning that would goad us to grow and provide a safe space for all the minorities, be it caste, class or gender.

When the topic turned towards who were the most oppressed of all, Dilip shared his experiences during  a Documentary shoot with Transgendered people and said that they are one of the most oppressed and discriminated lot.  A lot of issues were thrashed in the open that day. Sometimes the arguments looked like it would turn heated. There was a rush of questions and not everyone got the chance to air their views because of lack of time.  We plan to watch the other two documentaries Shit and Notes from the Crematorium by Amudhan and he has promised to attend our future meets and interact with us after screening his films. He said that he enjoyed the open minded interaction with our group and was happy to consider himself a part of our group. 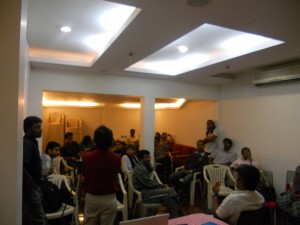 The film, the interaction and the conversation that followed left us cold. There was no sense of completion that day. In a way we had challenged ourselves to question our privileges, explore reality and inform ourselves about the sad state of affairs all around us which we had learnt to ignore for the sake of our convenience. And we emerged a little more informed and empathetic about the lives of people who are no different from us and deserved our consideration. Each one of us carried home a message that day: equality and opportunity should never be denied to any human being and that it is criminal to be selfish and oblivious to the privileges enjoyed by each one of us. We hope that this message would manifest in our thoughts and actions and we would have the courage to speak up when a friend or colleague or family member makes ill-informed comments about the oppression and discrimination in society. It is hopes and experiences such as these that make us cherish our community and bring us back to the CFT meets month after month.

(The interaction with Filmmaker Amudhan is available with English subtitles here: