The human body is structured to survive in adversities, particularly hunger. Evolutionally this made sense, as availability of food was always uncertain. Also, most biological functions in humans, growth and ageing, rate of metabolism, reproduction, cardiovascular and neurological activities, musculo-skeletal health etc., are all closely intertwined with nutrition. Hormones such as insulin, insulin like growth factor – 1, leptin and thyroxine act as links between food and bodily functions. There are now several studies that relate high levels of insulin, IGF – 1 and leptin with obesity, diabetes, cardiovascular diseases, osteoporosis, early ageing, degenerative diseases of the brain, and even cancers. On the other hand, several studies have shown beneficial effects of caloric restriction, such as increased longevity and reduced incidence of degenerative and metabolic disorders. Put simply, over eating that increases the levels of insulin, IGF – 1 and leptin accelerates ageing and onset of degenerative diseases and restricted eating that keeps these hormones low is beneficial. Fasting or cutting calories by 15-40% on alternate days or even two days a week have been reported to be beneficial. But such caloric restrictions must be sustained over time; fasting for a few hours followed by binging on food does not help. 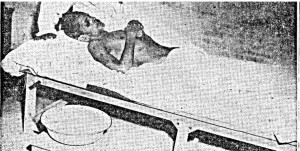 Voluntary starvation, as in hunger strike or forced starvation due to non-availability of food, are altogether different issues. Hunger strikes as a method of non-violent protest have been practiced since the Roman times and in India, it was very effectively used by Mahatma Gandhi, who at the age of 74 went on for 21 days with only water to drink.Potti Sriramulu died after undertaking a hunger strike for 58 days in 1952 demanding the formation of Andhra and his sacrifice paved the way linguistic reorganization of Indian states. In 1981, ten political prisoners who went on a hunger strike against the British presence in Northeast Ireland died between 46 and 73 days. There are several reports of people holed up after accidents or natural calamities, thriving for a few weeks on scant food supply. 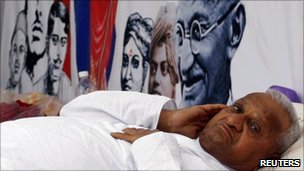 In general, humans can survive without any food for 30-40 days. Our body stores energy as glycogen and fat, but does not store much water; therefore, total fasting, without food and fluids, can be fatal in only 5-10 days. Total fasting can lead to loss of thirst and hunger, further aggravating the situation. During fasting, about 1.5 litres of water is needed per day, and ideally water should be supplemented with up to 1.5 g sodium chloride (half a teaspoon of salt) per day. If sugar and vitamins are also provided, the survival can be prolonged.

Other factors such as initial body weight that indicates the volume of muscles and fat stores, genetic make-up, the basal metabolic rate –the rate at which the body consumes calories at rest that in turn depends on the muscle mass, pre-existing health status, physical effort during the period of fasting that consumes calories, ambient temperature etc., also influence the outcome. Leaner muscle mass and bigger fat stores are associated with longer survival and thus women may have an advantage. In extremes of weather, the body needs to spend more calories to maintain the body temperature, thus adversely affecting the outcome. Absolute physical rest helps survival.

During the initial 3-4 days of fasting, the glycogen stores in the liver and muscles are used. Later, the fat stores are mobilized resulting in the formation of ketone bodies. It has been estimated that a healthy person with about 11kgs of fat can last up to 60 days. Excessive accumulation of ketone bodies may lead to serious complications. With depletion of fat stores, proteins from the body tissues, particularly muscles and the heart, are used for energy production, leading to extreme weight loss.  Although the body tries to adapt to this starvation by downgrading metabolism, mostly through the thyroid function, with continued fasting, the tissue losses add up, leading to death. In most cases, loss of 30-45% body weight, corresponding to a Body Mass Index of half of normal, or about 12-12.5 kg/m2, results in fatal complications such as damage to the heart muscles and/or kidneys, electrolyte imbalance or severe infections.

People who are fasting often feel dizzy and may faint on standing up, due to postural drop in blood pressure. They learn to stand up very slowly and may become almost bed bound. Most of them have decreased heart rate and lower blood pressure. Weakness and lightheadedness are common and may be due to electrolyte imbalance. Three fourths may complain of abdominal pain. They may also show signs of depression, post­traumatic stress syndrome and emotional lability. On prolonged fasting, there may be impairment of cognition that may cloud their decision making.

Refeeding after prolonged fasting is tricky. If refeeding is not done with care, the derangements in the levels of hormones, electrolytes and other macro and micronutrients may be aggravated, leading to disastrous consequences. Sudden introduction of sugars or high carbohydrate meals should be avoided as this can lead to deficiencies of phosphate, magnesium, potassium, and thiamine. Fluid and electrolyte balance should be carefully managed with intravenous fluids and thiamine, other vitamins, potassium etc., must be adequately supplemented. Oral feeding should be started carefully and preference should be given to fatty meals, avoiding high carbohydrate and high protein ones. Monitoring should be continued for several days and oral feeding should be gradually and carefully increased.