Disclaimer: The views expressed are based on the honest beliefs of the writer, and are not intended for any personal attack on the individuals involved. The following debunking is an attempt to spread scientific temperament and dispelling dangerous pseudo-science in public’s interest. 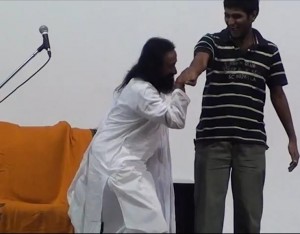 The biggest spiritual Guru in the world – the founder of the largest spiritual movement, the Art of Living foundation and its trademarked ‘Sudarshan Kriya’ breathing technique – the man popularly known as “Sri Sri” Ravishankar, gave a talk on “Secrets of Success” to students at the flourishing premises of IIT Kanpur, which in its own right is arguably one of the best technical universities in the Indian subcontinent. The entire speech was recorded by Students TeleVision Club, popularly known as STV and a copy of it was posted to YouTube in November, 2011.

In this hour long talk laced with contemporary spiritual jargon, occasional mentions of India’s golden fall from glory, Mr. Ravishankar, at the 42m 23s mark, called for a volunteer to come up on stage for a surprise demonstration, the details of which were not immediately revealed. One of the students from the back rows of the auditorium was chosen to share the dais. The chosen volunteer, a lean-framed male student wearing a black t-shirt with horizontal white stripes, was asked to extend his arm parallel to the floor, clinch his fist and resist the pulling down of his arm. Mr. Ravishankar, gripping the volunteer’s arm near the wrist, was able to pull down his arm easily over and over again, much to the amusement of the audience. He then produced from his pocket a small vial containing an unknown fluid, and shed a few drops on the volunteer’s arm. The volunteer was then asked to rub and spread this oil over his arm. After the volunteer took a step back and a deep breath to relax, the whole exercise was repeated again – except this time Mr. Ravishankar struggled quite hard to pull down the volunteer’s arm, amazing the vast audience. The volunteer, visibly impressed and believing that he had in fact become stronger in a matter of seconds after the application of the oil, went onto fall at the feet (cultural practice of surrender) of his new Guru Mr. Ravishankar. Following the thundering applause from his audience, Mr. Ravishankar went on to urge stronger volunteers to come forth.

The next male volunteer also went on to fall at the feet of Mr. Ravishankar after his new found strength. The frenzy in the arena seemed to have attracted a male skeptic from the audience to volunteer. He was visibly unimpressed by the arm pull down test and the claim of instantaneous improvement of strength and vigor following the application of a few drops of oil. The skeptic boldly asked for permission to perform the same test on his own test subject on the dais. While the skeptic readied his subjects, Mr. Ravishankar began offering an unscientific principle for the efficacy of his oil, that [sic] “one drop of poison can destroy the body. Can it not destroy? One drop of poison can destroy the immune system. No? The reverse can also happen – one drop of nectar can also strengthen your body.” The collective silence in the arena sounded like a silent hiccup in digesting the machinations uttered by Mr. Ravishankar. What happened afterwards was amateurish at best. The test subjects chosen by the skeptic gave testimonies to the audience that they felt “something different,” and the skeptic had to agree, on the microphone, that he was convinced of the gimmick, much to the delight of the student audience that was already spell bound.

The following part of this article would debunk the pseudo-science that was sold convincingly, and with authority, to an audience that was clearly unwilling to be skeptical of a revered spiritual leader.

The mystery oil, supposed to be containing Amruth and three Ayurvedic herbs, seems very similar to a dietary Herbal supplement (revealed on November 27, 2011) called Shakthi Drops, which are sold for €25 in 30ml vials on Art of Living’s EU website. Even though the directions for use clearly state oral administration after dilution in 150ml of water to build up your “immunity”, Mr. Ravishankar’s participants topically applied it onto their skin under his guidance.

Mr. Ravishankar and the participants involved seem to suggest epidermal absorption of this snake oil to boost their muscle strength. Scientific research reveals that it is very likely (though more studies are required among adults) for the human body to dermally absorb some components, if not all, of the topically applied fluid. That, however, does not imply that the absorbed components would instantaneously boost the immunity in the local region.

Modern scientific knowledge of the human body shows us that physical strength depends on various factors, including anatomy and the strength of the neural signal initiating a contraction of the localized muscle. We can safely say that there is no direct correlation between immunity, a biological property involving defenses against infection, and muscle strength in human beings. Therefore, even if we allow the farfetched claim of immediate boost in immunity to stand, it does not explain the immediate boost in muscle strength. None of these complex properties could be improvised within seconds as asserted by Mr. Ravishankar.

Actually, Mr. Ravishankar employed a derivative of the Delta Test or Arm-Pull-Down test used in Applied Kinesiology, an alternative pseudo-scientific practice. The original Delta Test involves having the test subject repeat a claim or swallow food to find a drop in arm’s resistance, which suggests an allergen or a false claim. Naive and unsophisticated as this may sound, the Delta Test demonstration could leave a powerful ‘visual illusion’ if done properly by a conjurer. The multi-million dollar power balance bracelet industry has fooled millions of people, scores of athletes and celebrities time and again into buying their bracelets using the Arm Pull Down test to their advantage in infomercials.

Numerous studies and controlled experiments have been done for this “test” which led researchers to find out that suggestibility, variations in the amount of force, leverage, the follow-through involved, muscle fatigue and distraction of the test subject can influence the resistance in the stretched arm. Armed with their findings on the pull down arm test, we could scrutinize the video evidence to find similar patterns.

On closer examination of the video, it is clear that Mr. Ravishankar uses a combination of tricks to lend credibility to his illusion. It is obvious in the video that the pivot on the volunteers’ wrists was closer in the first attempt than in the second. Mr. Ravishankar also uses a nice little trick, a slight upward motion in his “first” attempt, as he grips the wrist. It causes the muscles to relax, so that the arm can immediately be pulled downwards. The guffaws from the audience add drama to the spectacle that would ensue.

After applying his snake oil, Mr. Ravishankar either changes the pivot, or momentarily hesitates in the follow through (not discounting the change in grip) – giving time and a much needed stimulus to the arm muscles to provide greater resistance.

Another observation is that the subjects are asked to rub vigorously, take a deep breath and relax. When they return for the second attempt, their postures have changed and are better balanced to resist the downward action. Though I had previously alluded that the mystery oil was a deliberate product placement to increase curiosity in Shakthi Drops; it is imperative to state that we may never know its contents definitively. It could have contained alcohol or other (easily vaporizing) components dissolved in DMSO (Dimethyl Sulfoxide) which will be readily absorbed by the skin causing a different sensation in the applied region.

To conclude, Mr. Ravishankar’s exposition of instantaneous boost in immunity and muscle strength is scientifically inconceivable; however a rational explanation involving any number of the following factors – change in sensation, grip, pivot, posture of the subject, power of suggestion and increased reflexes – after the first stretch could have attributed towards greater resistance in the subjects even when tested by the skeptical student after applying the snake oil.

In India, Gurus have always been apotheosized and are considered above reproach for any of their actions. This cultural veneration of the master has rendered many to surrender their faculties of reason and skepticism, even when presented with highly questionable “miracles” and other shenanigans. Though it is very disheartening that a simple arm pull down demonstration was more than enough to brainwash bright minds at IIT Kanpur; it is almost frightening to consider the rest of the masses with far less critical thinking skills, who are just waiting in line to be exploited with pseudo-science by anybody.

Guru Ravishankar owes all of us a sincere explanation for his actions at IIT Kanpur.

The author would like to credit Pratibha Nair, Imran Hussain and Jaya Sharma for their help with this post.

A software engineer by profession with interests in online skepticism.

Leave a Reply to Subramoniam X