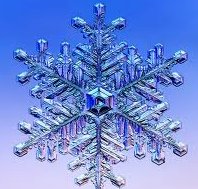 As explained in Part 5, the second law of thermodynamics says that, for an isolated system, the state of maximum disorder is the most likely thing to happen, given enough time. All gradients tend to be obliterated, and ultimately a zero-gradient or equilibrium state is attained if there is no input/output of energy or mass.

For open systems there is still a second law of thermodynamics, but it has to be so formulated that it includes the possibility of input/output of energy and/or matter.

Any gradient implies that the system is away from a state of equilibrium. Such a system is therefore unstable, and the spontaneous dissipation of the gradient demanded by the second law amounts to a move towards STABILITY. There is a hint here about how to generalize the second law so that it is applicable to open systems also. We have to incorporate two things: The tendency towards disorder; and the tendency to achieve stability by exchanging energy and/or matter with the surroundings (an option not available for isolated systems). We quantify the first part by introducing a parameter called ENTROPY (denoted by S). And the parameter relevant for the second part is INTERNAL ENERGY (denoted by U). 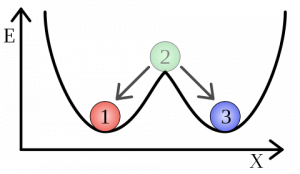 Entropy, or rather change of entropy, is defined as follows. Suppose we have a system at a temperature T, and we add a small amount dQ of heat to it. Then dQ/T is defined as the change of its entropy, and denoted by dS.

Consider a system as having two parts, one at temperature T1, and the other at a slightly higher temperature T2. When heat dQ flows from the second part to the first, the net change of entropy is dS = –dQ/T2 + dQ/T1 . Since T2 > T1, we must have dS > 0 always. Entropy does not decrease.

With the passage of time, T2 → T1, and therefore dS → 0. Finally, when T1 = T2, we have dS = 0, and equilibrium is said to have been reached. If a system is in equilibrium, it is implied that its entropy has reached the maximum possible value under the circumstances, and stopped changing any further.

So much for the entropy contribution to stability. Let us consider the energy part next. An example will help. Water changes to ice when cooled below 0oC at atmospheric pressure.

A crystal of ice has a highly ordered arranged of water molecules, arranged nicely on a lattice. This is clearly a case of order emerging out of disorder, so why does it happen? Why does an ordered structure emerge out of the highly disordered or chaotic motion of molecules in liquid water? This happens because the watchword is STABILITY, and not just order vs. disorder. For an open system, since energy and mass can be exchanged with the surroundings, the possibility is available that a higher-stability state may be attained (for example by a stronger bonding among the molecules) even at the cost of a little lowering of entropy locally. In the water vs. ice situation, whereas at high temperatures the average speed of the molecules is so high that they just collide with one another and go their separate ways again, for temperatures below 0oC the motion is sluggish enough that the molecules are able to stick together and form chemical bonds. The process of chemical binding releases some heat energy, which is transmitted to the surroundings. This loss of energy is possible here because it is an OPEN system. The bonded or crystalline configuration is a more stable situation at the prevailing temperature: Crystalline water, i.e. ice, has a lower internal energy (U) compared to liquid water.

Thus the overall stability is decided by a tradeoff between two energy terms: U and TS. We define a new thermodynamic parameter F as (U – TS). This parameter (called FREE ENERGY) decreases as the entropy S increases (because of the –ve sign in front of the entropy term TS). And it also decreases when U decreases; i.e. when the systems acquires a more stable configuration.

So, for open systems, the second law of thermodynamics has to be stated as follows:

IN ANY PROCESS OR PHENOMENON, THE OVERALL FREE ENERGY CAN NEVER INCREASE; IT EITHER DECREASES OR REMAINS THE SAME.

The tendency towards greater disorder is present in open systems as well, but the overriding requirement in both isolated and open systems is always that of maximum stability. We see so much order and self-organization around us because what we have are systems which are able to exchange energy and matter with the surroundings for achieving maximum-stability configurations. Nature does abhor gradients, but even the abhorrence of gradients is nothing but a tendency towards greater stability: Zero gradient means equilibrium, and therefore stability.

There is so much self-organization occurring in Nature all the time, but there is no violation of the second law of thermodynamics ever. 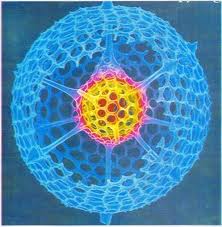 ‘If someone points out to you that your pet theory of the Universe is contradicted by experiment, well, these experimentalists do bungle things sometimes. But if your theory is found to be against the Second Law, I can give you no hope; there is nothing for it but to collapse in deepest humiliation’ (Arthur Eddington, 1944).

Leave a Reply to Theist X