Editor’s Note: A version of this article appeared earlier at Mangalore Today.

Many years ago I can recall a Rotarian asking me to join his club. He was a jolly good fellow, jovial in disposition and I was a well known consumer activist and he felt that I would be a good addition to his club. I told him that since I cannot become a member of any organization that promotes religious activity of any kind, I asked him as to whether his organization was a secular one or a non sectarian outfit. His reply was don’t worry, we all believe in one god, there are Muslims and Christians also with us. Any way, Rotary is fun. I replied that it was not the answer to my question and he told me that he was not in a position to say more and asked me to seek more clarifications from another Rotarian who was better read. Any way that shows the attitude of even the so called educated people to such issues!

So, that was typical attitude of one to such things- there is one god- a secular god. That there cannot be a secular God is beyond the imagination of most of the common people but they do believe that there can be a god who is for all the mankind! They cannot accept that there is someone who does not believe in the existence of any such entity and that the very so-called obeisance to such a one is an act not acceptable to someone like an atheist! The same is applied to things like footwear, dietary habits and such. Here again a question of ‘decency’ and cleanliness is also raised! The very temples which make a fuss about being ‘decently dressed’ and banning shorts inside, commenting about tight jeans etc. has priests inside who wear the most scanty of the dhotis and no shirts! Now, a similar fuss about footwear. I hate to remove my footwear particularly for so called trivial reasons and that too in public places where one enters by right. I do understand if the footwear has to be removed in server rooms of computers, operations theatres, ICUs but asked to do that in a public library really irritated me and led to my debating about it and also taking a look at the remove footwear situation in Mangalore!

I had wanted to visit the City library at the Gandhi Nagar Park, Mangalore on the 30th of June. There were a large number of footwear outside and my usual practice is not to follow the crowd and I entered
the premises. When I was asked to keep my footwear out by the person in charge I objected and told her that the library was a public place and there was no rule that footwear has to be kept out or any reason for the same. There were some vague attempts to convince me that it was something like a sacred place but I did not care for the same.

There were some people who came outside and told me why I cannot keep my footwear out like them and I replied that keeping the footwear out was their choice and not mine. In order to avoid further scenes I walked out of the place and on the next working day lodged a complaint in writing to the Chief Librarian of the Mangalore city that I was prevented from entering the premises of library for wearing footwear. Prior to lodging the complaint, when I called this person and asked him why I was prevented from entering the library premises wearing footwear, I was given some vague reasons about cleanliness and the like, and also that the library was a sacred place!

So, here was the attempt to convert the library into a place for the worship of Saraswathi, the goddess of learning! Since he said that there was no such rule I told him that I need action on my complaint which I would submit in writing as some verbal assurances could always be denied.

So that set me thinking about the so called rules about footwear. What one wears is a matter of personal choice and it should be one’s independence to decide how to dress. There could be a dress code in private places and even that had been objected to some times like the insistence in some ‘elite’ places that footwear was compulsory that too not any footwear but what was specified. There have been instances where in highly placed individuals and public personalities had been denied entry in some pucca white sahib clubs for not wearing footwear or for wearing the ones which were not to the specifications set by them. Here was the reverse of making people keep their footwear off for various reasons and what could be those? Well, as a boy born and brought up in Mangalore, I had not observed this rule except in temples and private residences which are of course places of limited access. The temples are places of worship and religious sentiments could be invoked for parking the footwear outside. The religious sentiments are that footwear contains leather and hence unclean. There have been instances wherein physically disabled people have been denied entry to places of worship as they were asked to remove their prosthesis or keep out their means of support for movement like wheel chairs. The other idea of removal of footwear has a deep casteist base. The footwear of dalits is unclean as much as them. In certain places in Tamil Nadu, in North India the so-called lower castes are not allowed to wear their footwear when they pass through the roads in the upper caste areas and have to carry them in their hands! In fact there have been riots and massacres when some of the Dalits insisted on their rights to wear them when passing through these places. Other people’s footwear perhaps could be tolerated but not that of the Dalits! In the present times when such a rule would invite the wrath of laws on untouchability the plan would be to make all people take off their footwear. 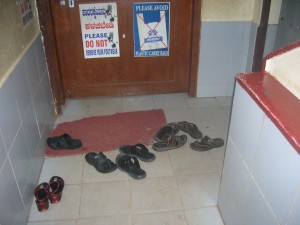 In Mangalore the default position seems like one has to keep the footwear out! In fact, the average person’s reaction when he or she enters some premises is to take off one’s footwear and keep it outside. This has resulted in a situation wherein they keep their footwear out even if told specifically that it should not be done. In fact in one of the largest books shops in Mangalore, there is a notice asking people not to remove their footwear, but they still keep it out as the moment one sees something about that, is perceived as an announcement to keep it out. This has resulted in people bringing their religious sentiments into places of work and business. People when they enter any premises look at the wall behind the counter and can see the pictures of the gods, goddesses and the godmen who are worshiped by the owners and hence the premises acquires the status of a place of worship needing the treatment of one such. I can recall an incident when I entered a cloth shop wearing my shoes and was told by the owner to keep them outside, I told him that I was not going to do that but would go elsewhere and walked out. One could understand that if there were such rules in places where people sit on the ground but this shop was not one such and hence it was only the photographs of the numerous deities adorning the walls that compelled one to do that.

Well, after a week of submitting the complaint to the Chief librarian of Mangalore city corporation I had not received the reply and when I called him about that the person who answered the phone was the accountant who told me that there was no rule that footwear should not be worn in libraries and since all I wanted to do was to enter with my footwear on I was welcome to do so and sarcastically asked me if I would do the same at a temple which was also a public place. I replied that since I was an atheist that situation would not arise and if it came it would be tackled then. But, I also informed him that since I had submitted a written complaint it was a matter of courtesy that the reply too should be in the same form and after some days I got the written communication that there was no such rule prohibiting footwear in libraries.

But, my posting this on my timeline on Facebook got a variety of reactions. While some felt that it was a matter of cleanliness, others felt that it was imposing the religious beliefs of a particular type on all. The reactions from one elderly person from Udupi were real eye openers- he said that for him it was a matter of great difficulty to stand on one leg and remove his footwear. He also said that diabetics would have problems if something pricked their feet. He also said he had problems whenever he visited his doctor as almost every one of them required footwear to be removed. Whether it is needed or not is a question which they have to answer. Many of the consultation rooms of the medical profession in Mangalore need the patients to keep their footwear outside. With some particularly the elderly needing help to remove their footwear particularly standing on one leg. It is time that their representative body, the Indian Medical Association decide whether the same is needed. While it is understood that wards, ICUs, operation theatres have such requirements it is doubtful as to whether there are any such needs for the consultation rooms which are only for outpatients. I have been also informed that the sub-registrar’s office in Udupi has the rule that one has to keep the footwear outside. 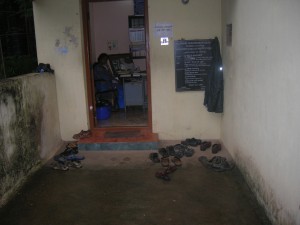 While people can make their own rules for their private spaces, the public places, particularly government departments, cannot be run as per the whims of the individuals employed there as the establishment is run using state funds and their salary is also paid by the State.

For those who may think that my taking on the staff of the library department was like using a hammer to swat a fly or a mosquito remember that these small insects can lead to dangerous epidemics and need to be checked! As a post script I would like to add that I entered the Gandhinagar Branch of the Mangalore city central library on the 11th of July with my footwear on and read the previous day’s newspaper! Though others had kept their footwear outside, there was not a whimper from the person at the counter!