While there is a grudging acknowledgement among even hard-core Hindu nationalist intelligentsia that Casteism in India is a serious issue, they would stop short of accepting it as a reprehensible social evil. The resort to evasion and camouflaging it as facet of culture and tradition or blaming it on factors and circumstances extraneous to Hinduism is typically a stock characteristic of Hindu caste apologetics.

But most sections of this intellectual class also exhibit a type of denialism, where almost the entire blame of India’s casteist legacy is laid squarely at the door of British conquest of India and if that does not work or sell, to replace it with Mughal and Islamic invasions as the primary cause of casteist structure of society

Blaming Mughal and British colonialism has by now become the most worn-out cliché of Hindu caste apologetics.

Yet it refuses to die down and keeps coming up in many ways even today like in the case of this report of the Hindu Council of UK or even like this comment below from a responder to a Nirmukta article on Vedanta:

“What if you are wrong about the social oppression part in ancient India prior to shankara… what if there are no proofs to your conjecture… and then will it just become social evolution as common to a society like the Greeks who had institutionalized slavery or the arabs of the same time… it(Philosophy you are criticizing) was science for their time… and the holders of this legacy (it was as much as your ancestors achievement as mine as any Brahmin’s or dalit’s, although I no longer wish to classify humans as such) are willing to change, we missed the enlightenment part since we were under successive Muslim rule and English rule, where in during the muslim rule I don’t find any secular institutions like universities shining from our country… So instead of criticizing subjectively criticize the objective nature of the state we are in… what if you are wrong about ancient india and their society provided we haven’t had great deal of research in this area…”

The Hindu nationalist above, being more ‘ingenious’ than the Hindu Council of UK has perhaps attempted to fill that void of repetitiveness of Hindu nationalist defense by positing a new theory of India missing the bus of the ‘Era of Enlightenment’ or the Age of Reason due to Mughal and British colonialism.

This is akin to replacing one species of denialism with another. But we will let that pass for now and focus on the denial of the apologist about the conjecture that there was caste-based social oppression in ancient India prior to Adi Sankara.

Even if there are elements of contention about the hypothesis of the existence of caste-based social degradation and persecution of the masses of underprivileged before the Adi Sankara era, there is no need for disgrace or contrite recantation about it.

Here we are referring to credible and reasonable inferences and deductions from historical records of particular periods in ancient and medieval India that can support or refute such a conjecture.

Based on the Hindu nationalists’ own insistence on questioning the period prior to Sankara’s time, the implication is that in Sankara’s time and beyond, caste-based discrimination and social decadence was already a harsh and undeniable reality.

Is India’s civilizational decline due to invasions alone?
(Image shows a controversial painting by the late MF Husain. Image links to source)

The scapegoat of British and Mughal villainy as the causative agent of Indian civilizational misery is a needless Hindu apologetic redundancy. That is because the vibrancy of Indian Civilization had died long before these invaders had set foot on our soil.

Now conveniently for the apologists of the innocence of ancient Indian scriptural heritage to the charge of perpetuating social injustice, the further we trail back in time, the reliability of chronologies and chronicles do tend to diminish and the contentions over their authenticity and authority rise.

While there can be obviously no proofs, to incontrovertibly establish my conjecture, given the state of documenting in the India before Islamic invasions, what I or any other open-minded Indology and social science novice can look for and build is a kind of ‘smoking gun’ plausibility, if not a totally cast-iron evidence and well as deductive interrogation of the rosy projections and assumptions about ‘benevolent’ monarchies of that timeline in history.

If we accept the opinion or claim of DD Kosambi that a much better clarity of the chronology of Indian History emerged with Alexander’s invasion of India around 326 BCE and the onset of Mauryan Empire from 321 BCE onwards, the timeline for testing this conjecture or hypothesis should be 350 BCE to 850 CE (Adi Sankara is estimated to have died around 820 CE).

I am taking 850 CE as the outer limit since around that time Buddhism almost totally vanished or was banished from India and the kind of regressive Hinduism that we are still witnessing today was gaining a firm foothold. The major monarchies in this period in the North though to the Deccan plateau were :

The chaturvarna caste system was already well in place during the period of the Mahajanapadas of which Nanda dynasty was probably a part. References to the ‘low birth’ or ‘lowly origin’ of Mahapadma Nanda is frequently found in any mention to the king and his clan. This appears to be attested by both the Vedic Puranas as well as by Greco-Roman chronicles. Mention of Mauryas and Nandas as Sudra empires is also not hard to find in the pages of history.

Whether there were innumerable jatis and its proliferation at the beginning of this period is hard to establish. But there appears to be evidence that by the end of the Mauryan Empire and the start of the Sunga era, stratification of society into varnas and jatis was expanding in spite of the Buddhist onslaught on Brahminic ideological hegemony during the latter Mauryan era.

One must also to aware of or open to the supposition that monarchs and dynasties of those times were not necessarily reformist, radical or revolutionary in their outlook, in the modern sense of the words, even if they were considered as successful in governance and in the political sense aggressive and militaristic.

So even if the Nandas, Mauryas and Harsha patronized Buddhists and Jains more, they did not necessarily cross swords with the Brahmin and priestly elites. They even collaborated with the Brahmin class by appointing them as ministers and royal priests. That an orthodox and hard-core Brahmin like Chanakya was the personal advisor and mentor of Chandragupta Maurya, shows that Brahminism faced no threat to their high elitist status from these Sudra/Dalit feudatories.

In the Arthasastra that is attributed to Chanakya, the approval of the social order of chaturvarna is quite clear and unequivocal. A look at the verses of CHAPTER III. THE END OF SCIENCES, leaves very little room for doubt especially with verses like these: 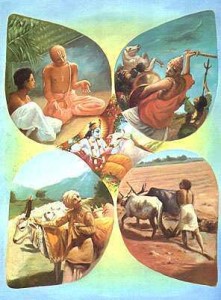 Chaturvarna system: Endorsed by Puranic scripture but older than the Puranas
(Image links to source)

“As the triple Vedas definitely determine the respective duties of the four castes and of the four orders of religious life, they are the most useful.”

“That (duty) of a Sudra is the serving of twice-born (dvijati), agriculture, cattle-breeding, and trade (varta), the profession of artisans and court-bards (karukusilavakarma)”

“The observance of one’s own duty leads one to Svarga and infinite bliss (Anantya). When it is violated, the world will come to an end owing to confusion of castes and duties”.

Hence the king shall never allow people to swerve from their duties; for whoever upholds his own duty, ever adhering to the customs of the Aryas, and following the rules of caste and divisions of religious life, will surely. be happy both here and hereafter. For the world, when maintained in accordance with injunctions of the triple Vedas, will surely progress, but never perish.

We must also be mindful that most histories of these periods or even later are not focused much on their prevailing social economy and its discontents, but more on the military exploits and conquests of their royal heroes. These chronicles may measure the wealth of the kingdom and its prosperity and not necessarily its dispersion and the extent of general poverty. Just because these eras were more successful and prosperous as compared the Mediaeval eras before or during Muslim rule does not mean that there were no social inequalities and crises in those times.

So casteist stratification and its vile consequences did not suddenly spring upon us in the Post-Gupta era. It has been a social evolution in the making as some of Hindu intelligentsia concede, but a perverse, retrogressive and degrading one that started centuries ago.

Ironically the roots, basis and foundations of India’s terminal decline were most probably laid in the ‘Golden Age‘ of the Guptas, which is the toast of Hindutva pride. This is of course a long story and not easy to grasp and needs some perspective in sociology and also the somewhat counter-intuitive hypothesis that actual events and their recognition in public consciousness are always lagging their underlying trends in social and cultural mood settings and milieu.

The prosperity, progress and relative stability of the Gupta era was masking the subtle yet consolidating undercurrents of revivalism of an orthodox and ritualistic Vedic religion in the form of

When the Gupta era eventually declined and ended, Brahmanism had taken a vice-like grip on Indian culture and society, with the royal class the Brahmin clergy colluding to keep the masses in perpetual submission and ignorance, in the immediately succeeding centuries.

Surely this is a subject of intense debate and counter-trend theories, which can hopefully be reserved for cogent debate and argument and clarificatory articles.

Demonizing the outsider and ignoring decadence within?
(Image shows a controversial 1981 painting by the late MF Husain. Image links to source.)

At the root of our desperate attempts to glorify our culture and religion, lies a deep-seated sense of inferiority and guilt of the miserable decline and stagnation of our civilization that began more than 1500 years ago. An inability to come to terms with this cultural tragedy and forget the dead past makes many of our intellectuals seek redress and palliatives in the form of a mindless rationalization and worship of antiquity.

This attitude is most conspicuous among the upper crust intellectuals, particularly Brahmins as their ancestors were the culprits who ran our civilization aground and toppled it into an abyss from which it is yet to emerge as a mature society and culture.

This article cited by Satish Chandra, very clearly shows that there is plenty of research available in public domain for analyzing ancient scriptures as well as historical and sociological investigation of the India of Ancient and mediaeval periods.

Of course the ostrich like attitude of Hindu nationalism can and does respond to these realities by ignoring them, pretending and proclaiming the poverty of such research, defaming the authors of such studies as Marxist and westernized or as apologists of Christianity and/or by engaging in its own version of revisionism in defiance of all rules of historical and research methodology.