Update: A Polish translation of this article is available here at the Racjonalista blog.

Having been an atheist / skeptic for years, I have probably succeeded in inculcating the skeptical attitude in my nine year old daughter. But after being a member of Nirmukta for the last few years, I have learnt to appreciate the significance of Secular Humanism. My interest in the freethought movement and my interactions with fellow freethinkers have helped me to realize the importance of instilling humanistic values and the spirit of freethought in my child. I intend to share my experiences and ideas in the hope that we could start a discussion on the topic and thereby create a space where we could keep the suggestions coming for future freethinker-parents. It is only fair that after having experienced what it means to grapple with freethought in a hostile environment we strive to make the lives of the next generation a little better.

While Parenting is basically nurturing a child and giving it roots and wings, Freethought Parenting (FTP) is applying the principles of Freethought [1] in bringing up a child and equipping the child to grow into a Freethinker. Children are like sponges and exhibit a great capacity for imbibing information and knowledge. This could have been an evolutionary advantage contributing for survival as learning takes place at different levels and in different ways – by observing, imitating, repeating and so on. Richard Dawkins says that even religion might have been a byproduct of this credulity and gullibility. [2]

First the detractor’s questions: ‘Why Freethought parenting?’ ‘Are you not indoctrinating your child as well?’ ‘Why can’t you leave them alone and allow them to make up their own minds?‘  Well, the problem is YOU can take the decision of letting them alone but others will not. In a society where there is a surfeit of religious signals from all directions, a din of spiritual noise and an overdose of piety, a child cannot live in isolation. Exposed to constant indoctrination most children follow the religion of their parents, learn to compartmentalize efficiently and become steeped in cognitive dissonance never learning the skeptical attitude. This is more so in a society where much premium is placed on respecting elders, unstintingly obeying them and exhibiting undue reverence towards traditions and taking pride in following mindless rituals. A child grows up seeing most people around her, including her icons in whatever sphere – be it sports, movies or even some scientists, revere religion and observe the rituals.

Thus there will be a constant infusion of religious ideas coupled with a steady barrage of dogma and once the child starts believing in all the woo woo stuff without being checked, it becomes a lot difficult to unlearn. Instead if a child is equipped with a skeptical attitude and a healthy dose of rationality, then she is on her own to navigate through the pitfalls. Further equipping a child with a rational outlook is not the equivalent of indoctrination of a religion. What is tried in our case is to cultivate a skeptical attitude in the face of any outrageous claim.  Article 51 Ah of the Indian Constitution enjoins an individual to develop the scientific temper, humanism, spirit of inquiry and reform.  FTP strives to equip the child develop such a scientific temper and to practice rationality in all walks of life.  “No country or people who are slaves to dogma and dogmatic mentality can progress ….” asserted Jawaharlal Nehru. 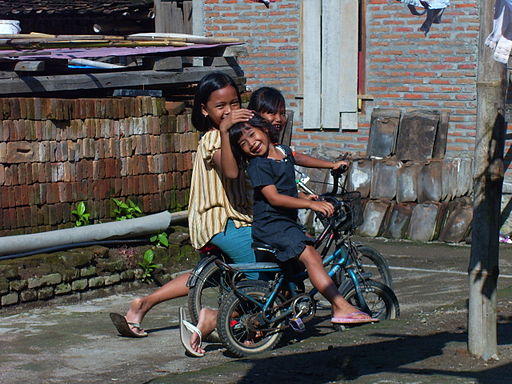 “Freethought parenting gives the joy of nurturing and bringing up a child who is a happy well-adjusted, well-rounded personality, kind and eager to contribute to the well-being of the society she lives in.”
(Image links to source)

While we cannot give our children ready-made answers because we may not have them ourselves most of the time and nor is it in the best interests of the child to be spoon-fed, what we can give them instead is a set of tools, a framework which would help them to navigate life. A Baloney detection kit to develop their skeptical attitude would be handy and would ultimately tell the child that Faith, Authority, Religion and Tradition are bad reasons to believe. To inculcate the spirit of scientific inquiry, to enable to be bold to think and reason and to train to ask questions before arriving at a conclusion is what a freethought parent would strive for. Such a child, if told that there are some things which you have to accept on faith and that it is impertinent to question them would simply, incredulously and impatiently ask ‘But why?’ and arrive at atheism simply as an obvious conclusion. It is not just the innumerable faiths that your child is going to face in future; soon he will be forced to face the onslaught of astrology, ghosts, vaastu, psychic healing, reiki, various conspiracy theories, naturopathy, homeopathy and a host of other pseudosciences. The list is endless.

The Religion bit is actually easy. Children soon learn the profound truth behind the simple assertion, ‘We are all atheists about most of the gods that societies have ever believed in. Some of us just go one god further.’  It is far harder to instill the values of Secular Humanism – to teach them that everyone is equal when all that they see around them is a very unjust world; to tell them that we adults have failed them in so many ways, when they are shocked by child labour and learn about casteism etc., To explain our cowardice, our failings for many things that are wrong with the earth which they have inherited from us is far more difficult.

Parenting is as it is a complicated exercise. I doubt if anyone can ever claim to be an expert in that. For one thing most of us are not entirely prepared while entering parenthood. Bumbling and fumbling we cross the stage when the little cherub is totally dependent on us for his most basic physiological needs. The tough times start when the little one learn to ask ‘Why’ or rather more often ‘Why not’. And that is when you probably rue your decision to be a good rational parent as that precludes the easy answer ‘Because I say so.’ You have to give your reasons, at least most of the time, taking care always to stay in the spectrum between the extremes of laissez faire and absolute authority.

Michael Sandel, Harvard Professor and author said, “One of the ways in which parenting is a learning experience and an opportunity for moral growth is that we learn as parents that we don’t choose the kind of child that we have. In most of our lives, we are accustomed to aiming at mastery and control and dominion-—over nature, over our lives, over our jobs, over our careers, over the goods that we buy. But parenthood is a school for humility. We can’t choose the precise traits of our children, and that is morally important. It teaches us what William May, a theologian whom I greatly admire, calls “an openness to the unbidden.” I think this quality, as a trait of character, as a moral disposition—an openness to the unbidden—teaches us to rein in the impulse to mastery and control that we experience in so many other parts of our lives.” [3] To reiterate,  we seek neither to master nor to control the child. In a mostly hostile environment that promises to wreck the inquisitive nature of a child, we strive to provide an ambience that would enable the flowering of the skeptical attitude of the child.

Well, all that prelude is for me to confess that this exercise is not akin to a sermon delivered from a pedestal.  It is to emphasize the recognition that FTP is like negotiating a path through the thickets in a jungle – a tough one no doubt but worthwhile for the strength and character building exercise (yours as wells as the child’s) and for the treasures you are likely to find along the way. FTP is also like a trek uphill what with it being a constant learning process as you trudge on, seeking help from fellow travelers, lending a helping hand when someone slips, pointing to the beauty of nature as you progress and in short enjoying the journey called life.

Throughout the article what is being referred to as a family is not just a heterosexual couple bringing up a male child. It would include LGBT parents with a child, a child being brought up in a commune and so on. Further such principles of Freethought parenting would benefit any adult who is influential in the life of a child; an uncle or an aunt, a neighbor or a teacher who can help the child gain such life skills. This influential adult in a child’s life is actually a very important concept since seeing a loved and respected aunt/neighbor who is an atheist would impact a child positively to counter the negative stereotyping about atheists that he is bound to encounter in his life.  I use the pronoun ‘he’ and ‘she’ randomly throughout the article to refer to the child for it is irksome to see even school text books written with a male centric view. Some emphasis is given to introducing / discussing atheism with a child because like Prof. PZ Myers says ‘science and atheism are natural allies.’[4]

What then are the joys of such FTP? Freethought parenting gives the joy of nurturing and bringing up a child who is a happy well-adjusted, well-rounded personality, kind and eager to contribute to the well-being of the society he lives in, not bogged down by guilt or fear, confident in his attitude, not requiring a super natural reason to live, his morality based on the golden rule[5] and not because he is afraid of hell, not believing in karma as a reason for the inequities of life and not system justifying[6]; a child who understand the wonders of the universe, cherishes the gift of life, looks forward to each day and relishes the beauty of nature. A responsible child, a child who is intolerant of casteism and gender discrimination; a child who realizes the value of life and knows that it is the only chance that she will ever get. A child courageous about her convictions having arrived at them with reason and able to defend them. A child able to think for herself and compassionate to care for others. A child who does not believe that rewards await him in his afterlife but seeks to create ‘heaven’ on this earth.