In the previous four posts in this series, I have introduced rudiments of the Big Bang theory, and some elementary ideas from quantum mechanics. Another crucial notion for understanding the evolution of our universe, and of life on Earth, is that of ORDER vs. DISORDER.

Can you scramble an egg? Yes. Can you unscramble a scrambled egg? No way. The physics behind this common-sense fact has far-reaching consequences. It is so important that it is stated in the form of a law in science. It is called the second law of thermodynamics.

The law states that, in any system not interacting with the surroundings, things cannot become more ordered than they were to start with, but they can become more disordered. (Scrambling an egg amounts to creating a state of more disorder. A scrambled egg getting unscrambled would amount to the emergence of order out of disorder.) 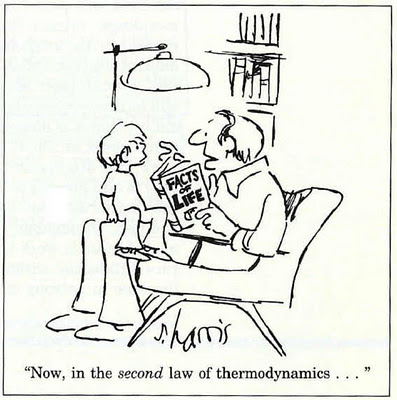 If there is a second law, there must also be a first law of thermodynamics. Indeed there is. It states that, although energy can be transformed from one form to another, it cannot be created or destroyed. It is thus the law of conservation of energy.

Let us denote heat energy by Q, mechanical work by W, and something called ‘internal energy‘ by U. Imagine a gas in a container at some temperature T1. Suppose you add some heat Q to this system. Naturally, its temperature would go to some higher value T2. This is because the atoms or molecules of the gas are moving around randomly, with an average speed of motion, and adding heat raises this average speed, and therefore the temperature.

The motion and internal vibration of the molecules of the gas implies the existence of energy; and internal energy U is a measure of that. The temperature increases from T1 to T2 because the internal energy has increased from, say, U1 to U2 when heat Q was supplied. What the first law of thermodynamics says is that, when heat Q is expended, some part of it goes into doing mechanical work (in this case thermal expansion and the consequent lifting of the piston in the figure below), and the rest goes into increasing the internal energy, or temperature. Thus 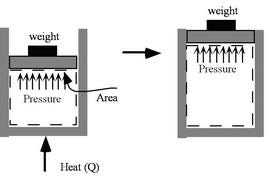 But why can we not have W = Q? That is, why can we not convert all heat to work? That would amount to having U2 = U1 in the energy-conservation equation above, which amounts to expecting that temperature would not rise (from T1 to T2) when heat Q is supplied to the system. This is impossible. What is needed for that to happen is that all the chaotically moving molecules in the container in the above diagram should move in a concerted or special way to move the piston by such a distance that W = Q. This is clearly impossible because there is no reason for the randomly moving molecules to move in that special way, even on an average. Therefore W < Q always.

When heat Q flows into the system, its temperature T1 must rise to a higher value T2. Similarly, if there are two systems (or two parts of the same system), one at temperature T1 and the other at a higher temperature T2, then heat must flow from the hotter part to the cooler part. This will happen spontaneously, and will go on till T1 = T2; i.e. till equilibrium has been reached.

What has happened here is that there was a temperature GRADIENT (T1 ≠ T2), and Nature destroyed the gradient. In fact, a valid way of stating the second law of thermodynamics is to say that NATURE ABHORS GRADIENTS. We see this happening everywhere. Those who work with vacuum technology know how difficult it is to maintain vacuum in any system. Vacuum in a container means a pressure gradient w.r.t. its surroundings. The vacuum deteriorates with time, in keeping with the law that gradients must decrease spontaneously.

Similarly, concentration gradients tend to be annulled with time. The sugar poured into your cup of tea gets dissolved with time, even when you are not stirring it. The figure below illustrates this for the case of two gases (coloured red and blue for fun). If you remove the partition, the gases mix, rather like the scrambling of an egg. 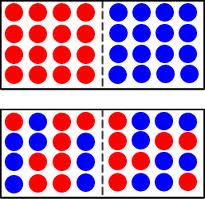 But the gases will never unmix on their own, just as the egg will not unscramble on its own. Any isolated system always progresses towards a state of maximum disorder. That is what the second law says.

But we also see so much order around us: 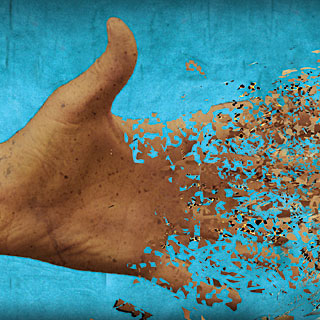 Leave a Reply to Ramesh X