As I sit to write a report on the Chennai Freethinker’s 16th meet that happened yesterday (17th June), I am struck by the thought that the CFT members would be right now ( a routine Monday morning),  engaged in diverse activities  in all sorts of offices and colleges for we have members who are doctors, software professionals, entrepreneurs,  government employees, film makers, students of arts / science and so on. It is in this context that I find the overwhelming response to Nirmal’s talk astonishing.  But then I am getting ahead of myself and so I start from the beginning.

The format for the CFT meets has evolved through the months. For the first few meets we did not have any major agenda – it was a heady feeling to meet fellow freethinkers with whom we could discuss  topics related to Science and Rationality. And so we were content to get to know people, share anecdotes about how we confronted superstition and irrationality in our lives, exchange details about good books and blogs and occasionally watch a video or two.  Last October we organized Thinkfest which was very satisfying as we got to hear lectures by some stalwarts. But then we realized our monthly meets should also be more than chatting sessions (not to undermine the importance of such chats as it gives a lot of space for people to open up). We also realized that we have amidst us members who may not be professional speakers but had good knowledge on certain subjects and that their presentations would benefit everyone in the group.

We tried a new format last month – Introduction by new members,  A presentation,  a short talk followed by interaction and found that it worked well. This month we planned the second part of Bala Bhaskar’s presentation on Logical Fallacies and instead of a short talk we asked Nirmal Rajah to make a full length presentation on Paleontology and Climate change. 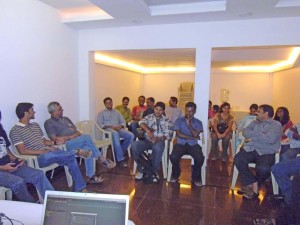 We had several new members joining us this month. The ice-breaking session was fun as usual with members sharing their ‘enlightenment’ stories. H’s story was our all time favorite: ‘I read the holy book of my parents’ religion thoroughly and turned an atheist!’ Nirmal regaled us by recollecting the exact date he turned an atheist. He was taught by professors who started their lectures saying that they did not believe in Evolution but taught because it was in the syllabus. Though he was plagued with doubts about the existence of god seeing that most of his prayers went unanswered, the moment of realization dawned on the day he visited an area in South India which was rich in fossils. D’s story was touching when he explained how he learnt to come to terms with his disability and how he had to face the prejudice of people around him. We had quite a few members who said they were not atheists but joined the meet because they had a lot of questions. One member who attended our meet a year back said that he did not attend the later meets because he did not agree with the purpose of our meets. But later he started studying and browsing science related stuff and was happy to join us again. Rao, a film maker said he was against all kinds of inequalities. Arjun, a student who had come on a visit from USA attended the meet with his father who said he was not an atheist but against rituals and traditions. Sunday happened to be celebrated as ‘Father’s day’ and it was refreshing to see a father and son duo who obviously did not agree on everything but were magnanimous to give each other a lot of space.  Haripriya who had attended the meet last month for the first time had brought two of her friends and they too said that they had come with an open mind to learn. We were happy that this group is not seen as a rigid group which welcomed only members who are atheists but is considered to be a place where ideas can be discussed with an open mind and where you go hoping to gain some knowledge. We would have liked our new members to share their ideas more but as we had lined up two presentations for the day, we were hard pressed for time.

Bala Bhaskar gave a short recap of his last presentation and continued talking about further fallacies. What made it easier to understand the concepts were that the examples were taken from what we confront in our day to day life. Dr.B.M.Hegde in his article in The Hindu that morning had given us a lot of fodder for thought. The video clips shown to identify the logical fallacies were what we see in our televisions regularly – a clip from the Tamil programme ‘Neeya Naana,’ quite a few clips from ‘Engey Brahmanan’ (it was dripping with fallacies!) and debates in the English news channels. There were a few clips of Richard Dawkins and Sam Harris trouncing their opponents by pointing out coolly the fallacies in their arguments. We had a tea break and then it was time for the next presentation.

Before his talk Nirmal Rajah was a bit apprehensive about his talk being  ‘not too academic’  – our response that we did not want an academic talk as most of us were novices in the field, was a relief to him.  Once he started talking, we found his passion infectious and we were thoroughly  smitten by the topic. A couple of members had studied Zoology in College – the rest of us were students of the world wide web – some of us  had lapped up what Richard Dawkins, Stephen Jay Gould or PZ Myers had written and some did not know much about Evolution or Paleontology. Not to forget the fact, that in all probability none of us are ever going to sit in any class and hear a Professor lecture about the Cretaceous era or see fossils of any kind except maybe in a museum.

But when Nirmal gave his talk on Paleontology and showed us his collection of fossils, the Chennai Freethinkers were captivated and listened in rapt attention. Of course we committed the error of interrupting him with our eager queries but that can be forgiven as the folly of enthusiasm!  We saw many fossils including a Trilobite fossil.  He explained to us the time periods and talked about the 5 major extinctions. Most of us had goosebumps when we tried to contemplate the age of the fossils.  Nirmal told us that Ariyalur near Trichy has a rich collection of fossils but sadly not much care is provided to protect the area. He had prepared meticulous slides and it was mind boggling to understand the work of a paleontologist. We had several questions about the manner of collection of fossils, dating them and studying them. It was a very vast topic and Nirmal patiently explained to us how the past climates were and what continental drift was. The presentation was for nearly two hours but we hardly noticed the passage of time. 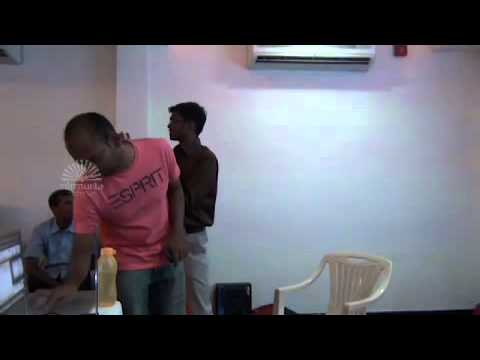 It is to the credit of the members that they showed great interest in understanding what the fossils meant and what the scope of the subject was. Of course we took an occasional jab or two at the young earth creationists. It never ceases to amaze us how fascinating the world actually is and how petty the religious stories finally are. Carl Sagan has put it beautifully in his Pale Blue Dot,  “How is it that hardly any major religion has looked at science and concluded, ‘This is better than we thought! The Universe is much bigger than our prophets said, grander, more subtle, more elegant?’ Instead they say, ‘No, no, no! My god is a little god, and I want him to stay that way.’”

For some time now Chennai  Freethinkers have been planning to move out of the conference halls and make a trip as a group. We have had plans of visiting the Planetarium, the Crocodile Bank and going on a Tree walk with Nizhal to identify the common trees in Chennai. Added to this now is a Fossil hunt at Ariyalur, Trichy with Nirmal! It took some effort for us to move from our comfortable afternoon chat sessions to organize presentations and talks. It might take similar effort to organize an outing but we realize that the benefits would be immense.

We seek topics for our future talks and we also wish members would volunteer to make presentations. One suggested topic is a Book review. In time we should be able to organize debates amongst ourselves.  We realize the importance of having freethought related material in Tamil and so we seek translators. We hope to have a member present a talk in Tamil next month. We request members from other city groups to join us in our meets and also give short talks. We also intend to set atleast an hour for interaction since we generally spend quite some time sharing experiences, talking, cribbing and ridiculing about issues which we don’t get to talk openly otherwise. That was missing in this meet but we will compensate in our next meet!

To conclude I would like to quote Richard Dawkins  from Unweaving the Rainbow “After sleeping through a hundred million centuries we have finally opened our eyes on a sumptuous planet, sparkling with colour, bountiful with life. Within decades we must close our eyes again. Isn’t it a noble, an enlightened way of spending our brief time in the sun, to work at understanding the universe and how we have come to wake up in it? This is how I answer when I am asked — as I am surprisingly often — why I bother to get up in the mornings. To put it the other way round, isn’t it sad to go to your grave without ever wondering why you were born? Who, with such a thought, would not spring from bed, eager to resume discovering the world and rejoicing to be a part of it?”

And so I extend a warm welcome to join us in our monthly meets and experience ‘an enlightened way of spending our brief time in the sun and to work at understanding the universe.’