The birth of our universe, namely the Big Bang, is described by scientists as a ‘quantum event’. What does that mean? 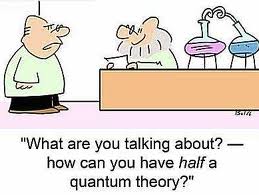 When does the approximation become invalid, and it becomes necessary to invoke laws of quantum mechanics directly for explaining a natural phenomenon? One situation is when the spatial dimensions are extremely small. A tennis ball is so big that classical mechanics is adequate for describing its trajectory. An electron is so small that only quantum mechanics can explain its behaviour properly.

But now consider the famous double-slit experiment first performed by Davisson and Germer in 1927. They shot a beam of electrons through two parallel slits, and recorded the positions of the electrons on a flat screen on the other side. What they found was that the electrons behaved, not as particles moving in straight lines, but as waves, forming a diffraction pattern like the one you would expect from a beam of light. This established the wave-particle duality of elementary particles like electrons. 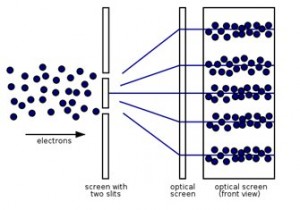 There are serious consequences of this conclusion. A particle can be assigned a certain position or ‘coordinates’ in space. But we cannot do that for a wave. Consider the familiar sound waves in air. As a sound wave travels, there is compression and rarefaction in air. Some of this vibration of air reaches your ears, and you sense the sound. But can you tell that the sound wave is here, and not there? No. It is everywhere; with different intensities, of course.

So, if an electron has wave properties, it means that it is everywhere at the same time! We say that it is delocalized. This is one of the shocks that quantum theory inflicts on us. There are many more. And yet, it is the most successful and the most thoroughly tested theory, or model of reality, ever.

The wave nature of electrons is a reality. Otherwise we would not have been able to build the very important and much used electron microscopes. In these devices, electrons do what is done by light in an optical microscope.

Just as electrons have wave properties, light can also behave as if it is a collection of particles called ‘photons’. This was established in 1905 by Einstein for an experiment involving the so-called ‘photoelectric effect’, and he was awarded the Nobel Prize for this work in 1921. We say that electromagnetic radiation (which includes light, as also X-rays, gamma-rays, etc.) exists as discrete packets of energy, or ‘quanta’, called photons.

Now consider an experiment in which an electron is more conveniently interpreted as behaving like a particle, rather than a wave. We can assign a position and a momentum (or velocity) to it. In a 1-dimensional situation, the position is, say, x, and the momentum is px. Let ∆x and ∆px be the errors or uncertainties in the measurement or specification of these quantities. In classical physics, it is possible for these errors or uncertainties to be arbitrarily small, even zero. Not so in quantum physics. There is this famous principle called the Heisenberg uncertainty principle, according to which the product ∆x.∆px cannot be less than a certain quantity of the order of the Planck constant, h. The principle says that ∆x.∆px ≥h/(4π). Of course, the Planck constant is a very very small quantity, but it is not zero.

This principle implies that if ∆x is nearly zero, then ∆px is extremely large, and vice versa. And large ∆px means large uncertainty in kinetic energy (because momentum and kinetic energy are directly proportional to each other).

There are several ‘conjugate’ pairs of quantities for which the Heisenberg uncertainty principle must be obeyed. Energy E and time t are another such pair, and the principle states that ∆E.∆t ≥h/(4π). This provides a very important loophole (!) in the principle of conservation of energy, because the uncertainty principle says that energy conservation can be violated by an amount ∆E, provided it occurs for a time less than ∆t.

Back to the Big Bang event. This was a quantum event because the spatial dimension of the system was extremely small: ∆x ≈ 0.

And this, in turn, means that ∆px, and therefore ∆E, could become arbitrarily large at the moment of the Big Bang. Our universe was born out of such a quantum fluctuation.

This energy fluctuation got sustenance from the fact that the gravitational interaction was born at the same instance, and the rest of the story is as given in Part 2 of this series.

Admittedly, this is a simplistic narrative, but should be enough to convey to the lay person how something could emerge out of ‘nothing’, without having to postulate the pre-existence of a Creator.

For those who can stomach it, here is an excerpt from a book by Seth Lloyd (2006):

Quantum mechanics describes energy in terms of quantum fields, a kind of underlying fabric of the universe, whose weave makes up the elementary particles – photons, electrons, quarks. The energy we see around us, then – in the form of Earth, stars, light, heat – was drawn out of the underlying quantum fields by the expansion of our universe. Gravity is an attractive force that pulls things together. . . As the universe expands (which it continues to do), gravity sucks energy out of the quantum fields. The energy in the quantum fields is almost always positive, and this positive energy is exactly balanced by the negative energy of gravitational attraction. As the expansion proceeds, more and more positive energy becomes available, in the form of matter and light – compensated for by the negative energy in the attractive force of the gravitational field.