Editor’s Note : A translation of this article in Polish is now available at the Racjonalista blog.

An honest reflection on a draconian practice in our societies

It was the spring of ’05, in the beautiful valley of Karora village in Northern Haryana, when the sun had bid farewell and the full moon accompanying by a cluster of stars appeared in the darkness, Manoj had fallen for Babli. Although this Haryana lad couldn’t figure out the extent of his fall, he somehow got convinced that it had been a free-fall into the abyss, in love with Babli. At his first encounter with his lady love, he acted rude, for he had been stoic all his life, and his friends referred to him as ‘stone hearted’. To Manoj, she was just a woman, but as time passed, and seasons cycled, Cupid set his arrows to strike at Manoj’s young heart. It didn’t take long for Babli to feel the same; on the trajectory they had to encounter agony, grief, pain, distress and a load of sacrifices. A year later the young couple began to feel their souls in each other, and decided to love for a lifetime. Just as a means of formality, they had to turn to their elders for approval. However, the approval never seemed like coming. 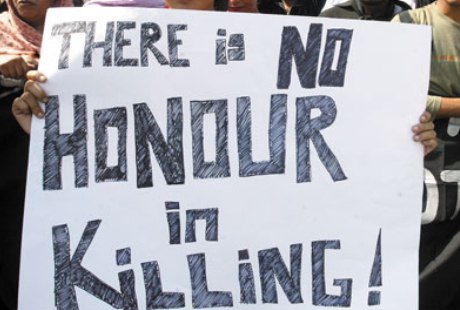 Babli pleaded with her father, who was adamant about caste. Manoj belonged to a different caste, relatively “lower” than Babli’s. Desperately in love, the couples decided to elope. They did, but only a hundred miles away, where Manoj’s friends helped in the registration process. A week later, Babli’s brother Suresh found their whereabouts and coerced her to leave Manoj, with a threat of murder. Little did he know that, threat of death would send fear signals to landlords, mafia dons and politicians, but not for those in love. Babli bravely defied her brother’s threats. As social stigma spread in the neighbourhood, Babli’s father Charan Das ordered his son Suresh to fulfill the family’s wicked wishes and save the family’s “honour”. Not tough enough to handle the “shame” caused by Babli, her brother Suresh set forth to redeem the lost “honour”.

On June 9 2007, Manoj and Babli were found dead near a canal. The scene was terrifying as the couple was brutally slaughtered to death. The investigating authorities confirmed it was a cold-blooded murder. The electronic media for the first time, awakened to the enigma surrounding the motive behind the killing of newly wed couples; to their astonishment and largely to the world’s, they discovered it was an incredibly disturbing one. It was baptized with the name “Honour Killing” – a license to kill for the “shame” caused by the girl, as a pretext for preserving the family “honour”. In this case it was effortlessly carried out by Babli’s family members – her brother Suresh, her cousin and her uncle – with clear instructions from her beloved father Charan Das.

At his first hearing, Charan Das openly justified his actions, on the grounds of rituals that were practiced for centuries. To support his position, the self-proclaimed Panchayat legal body – the vicious ‘Khap’ panchayat – openly lauded the assassins, and protested against the civil bodies and human rights groups for interfering in traditional matters. The local bodies of law initially dismissed the case for lack of proof. But the extent of savagery on the part of the alleged were enough to evoke considerable media attention. Even though the Haryana politicians sought interference, hoping to submerge the case, the voices of sanity resisted with thrust. Three years later in March 2010, after raging outcry from civil society, human rights groups and the media, the accused were sentenced to capital punishment.

The Indian media and legal experts hailed it as a “landmark judgment”, a victory over the infamous assemblies which acted as parallel judicial bodies with impunity for years. After the judgment, in a Parliament session, Home Minister P. Chidambaram proposed a bill that included “Public stripping of women and extermination of young couples from villages and any act which is humiliating will be punished with severity”, and that would “Make Khap dictated honour killings a distinct offence so that all those who participate in the decision are liable to attract the death sentence”.

The iconic human rights organization Amnesty International says this about the concept of “Honour Killing”: “The regime of honour is unforgiving; women on whom suspicion has fallen are not given an opportunity to defend themselves, and family members have no socially acceptable alternative but to remove the stain on their honour by attacking the woman”. Over the years, this form of killing has taken centre stage in third world countries. Human Rights Watch reported that countries like India, Pakistan, Bangladesh, Iran, Indonesia, Sudan, Egypt, Turkey and Saudi Arabia have a high degree of oppression of women, in the form of rape, torture, sexual harassment, verbal abuse, domestic violence, repressive societal norms, honour suicides (suicides generally by women victims of rape, to further protect family shame. In some cases, they are coerced to kill themselves by family members), public flogging and stripping, forced marriages and stoning to death.

It is estimated that nearly ten thousand people are killed in neighboring Pakistan every year, for the alleged crime of causing “shame”. Salman Rushdie’s upsetting and brilliant psycho-profile of Pakistan, in his 1983 novel Shame, rightly laid emphasis on the crucial part played by sexual repression in those regions. And that was before the Talibanization of Afghanistan, and of much of Pakistan, too. It is popularly called “Kharo-Kari” in Urdu. Author and journalist Christopher Hitchens summarizes the situation of a backward Pakistani Muslim society like this: “Here is a society where rape is not a crime. It is a punishment. Women can be sentenced to be raped, by tribal and religious kangaroo courts, if even a rumor of their immodesty brings shame on their menfolk. In such an obscenely distorted context, the counterpart term to shame which is the noble word ‘honor’ becomes most commonly associated with the word ‘killing’. Moral courage consists of the willingness to butcher your own daughter.”

The story of India doesn’t appear bright either, at least a thousand people have been done to death each year owing to “honour” killings and the country needs to introduce stringent legislation to deal firmly with the heinous crime. The website www.honourkilling.in is exclusively dedicated to raise consciousness about this issue and halt this barbaric crime once for all. It uses such beautiful phrases like the one that says “No Honour in Killing” and “Don’t try to be God if you are not one”. On that note, there is possibly nothing more that anyone could offer to cure this draconian ailment. The other worrying trend, that most human rights organizations virtually suspect, is the flow of such thoughts into the veins of educated urban societies. The pressing need of the hour lies on counseling the youth, raising public awareness, schooling on reason and rationalism and formulating stricter laws.

Women are arguably the worst victims of social stigmas, faith based dogmas, wars and tyranny for ages. These evils peaked in the dark ages in Europe, the horrifying stories of ‘witch-hunts’ and ‘burning of adulterers’ will haunt us forever. In these days, feminism has drastically failed in some parts of the world; Afghan women are forced to surrender to the brutality of obscurantist male folk, while the situations have worsened in the radically charged tribal belts of Pakistan, where women are sentenced to caning for alleged “immodest behavior”.  A French government study shows that, women make a negligible number in acts of crime and terror; shockingly over 95% of suicide bombers and militants in the world comprise of men. At the same time, there is a tremendous rise in atrocities against women all over the world. It is important for the world media and civil society groups to stand united against misogynistic societies and governments. Only when women are free from the chains of social repression can we possibly claim to be living in a civilized world.

A Financial Analyst in profession, I graduated from St. Aloysius College with a M. Com in Finance Major. I am a passionate essayist, and a own a special distaste to Patriarchal establishments and 'religious' societies. A long time fan of journalists 'Christopher Hitchens' and 'Nadeem F. Paracha', both of whom i adore as the worlds most fierce writers. Closely in touch with current political scenario, I write with zeal and passion not hesitating to hurt people's sentiments.