There is a branch of psychotherapy called “Logotherapy” , which deals with meaning of life. I wish to condense several volumes of its literature into this post, for the benefit of those who are unaware of this. I have adapted the model to suit the requirements of Secular Humanists for a meaningful life, who happen to be people without the compulsive need to suck on the pacifier of blind faith.

According to Logotherapy, we can discover the meaning of life in three different ways :

3. Through the attitude we take when we are faced with situations in which we can do absolutely nothing, as in the case of an incurable disease viz., an inoperable cancer, or being stricken with blindness, or losing a leg or arm. Nevertheless one choice remains and that is the choice of our attitude towards it. This according to logotherapists, is the last of human freedoms — the capacity to choose one’s attitude in a given set of circumstances. The noblest appreciation of meaning is reserved for those who, when faced with what looks like an unalterable situation, rise above it and grow beyond themselves by the attitude they take towards their predicament (Attitudinal values).

The chief duties of a human being is to get to understand as much of the universe as he can and then on the strength of that knowledge, to do his utmost towards making it a better universe than it would have been if he had not happened to be born, by creating some bit of a new value, though it may only be making two blades of grass where one grew before, or mending the broken leg of a sparrow, or making some difference in the world, but not the kind that suicide bombers do now-a-days. It is for each of us to decide in what way, given the powers and gifts that we possess and the situations with which we are confronted, we can add value to the world around us and in doing so, discover the meaning of our life.

It does require a lot of creativity to write poetry or prose, to be a novelist or write a non-fiction book after research, to paint pictures, whether portraits or landscapes, to write lyrics for a song and compose music for it, to produce a film or even a TV serial, to learn to bowl a googly in cricket or become a Bradman-like batsman. It does require creativity to start a new enterprise and run it profitably. The work of value engineers involves a lot of kaizen or continuous improvement. Scientific research leading to a Nobel prize or at the least resulting in the publication of a paper in a peer-reviewed professional journal, involves a lot of creative effort.

However, for the ordinary person who cannot do exceptional things, doing something to the best of one’s capabilities, doing it slightly better than what was done earlier, is realizing creative values.

One way to realize creative values is to stop watching like a zombie, the meaningless soaps on the TV, and taking up instead a guitar or violin and learning to play it. It may sound cacophonous to others. But what matters is that you are accomplishing something by yourself. As long as you are playing it a wee bit better than yesterday, you are creating meaning in your life. There is a lot of creativity involved in cooking different tasty but at the same time nourishing meals.

This is the area of life where we receive things that we have not earned, where life gives us free gifts.There are many things of value that come to us in this way:

Natural Beauty and creativity of Nature : sunset and sunrise, mountains and sea, flowers and trees — all these are bestowed on us freely without money and without price.

Creativity of Humans : The great teachers, painters, writers, poets and music composers have given of themselves freely. We could not by ourselves have achieved what they have to offer. Yet it is ours for the taking.

Thirdly, our most beautiful human relationships are a free gift : We did not pay in advance for the motherhood that bore us all or the maternal love that nourished us. All this was poured out freely.

We can thus find meaning in all these three experiential ways.

It should be remembered that experiential and creative values are not the only sources of meaning in our lives. Even if we are facing a fate which cannot be changed, there is still meaning available in our lives. Logotherapists say that when you can no longer change the situation, you may change yourself, which means you may change your attitude towards your fate. Changing yourself in such cases means rising above yourself, going beyond yourself. Suffering in itself has no meaning, but we can assume meaningful attitudes towards events that in themselves are meaningless.

An example from Hindi movies

I recall a beautiful movie I saw in 1971 called “Anand”, starring Amitabh Bachhan, Rajesh Khanna, Johnnie Walker and others. Rajesh Khanna is the hero and suffers from an inoperable terminal cancer. He is aware of it and also aware of the fact that he has only 3 months time on earth.

He had 3 options available to him. He could say to himself ” why do such bad things happen to good people like me ?” and make himself miserable and make everybody in his universe miserable. Secondly, he could buy a AK 47 or 56 or a country made revolver from the underworld and shoot down all the bosses who had harrassed and humiliated him in the various places that he worked, with impunity, because by the time the law catches up with him and makes the connection, he would have died anyway. However he chooses the third option. He does some marital counselling to patch up differences in a friendly couple, tries to learn a new language so that he could speak to a beautiful girl who doesn’t know other languages and tries to courageously face his predicament. Isn’t that nice ?

Attitudinal values is taking the proper stance or posture towards tragedy in our own lives. It is the courage we show in facing up to the trials & tribulations of life. Some people who are visually-challenged or hearing-challenged, or handicapped in other ways cannot be very creative or cannot realize experiential values, in the sense that they cannot do memorable feats or even enjoy beautiful sights or beautiful music. How then can such people create meaning in their lives ?

I have noticed that such people come to terms very quickly with their handicap and try to surmount it by trying to achieve something in their own small ways. People without upper limbs try to paint and write with their feet, blind people or rather visually-challenged people take up singing or active appreciation of music. When life hands them a lemon, they make a palatable lemonade, by squeezing the juice into a glass of water and adding sugar to it. But then, there are those amongst us who, when life hands them a lemon, think that they have to eat only the outer rind, throw away the fruit and wonder why life is so bitter. 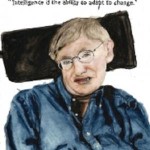 Stephen Hawking of U.K. suffered from a motor neuron disease at the age of 20 and he was given only a couple of years to live by the neurologists, but yet he survived. He completed his Ph.D after getting the disease and all his unique research on Black Holes was done much after that, when he was virtually paralyzed, and he couldn’t talk and was confined to the wheel chair. He was depressed for all of one month ( ! ) but through sheer determination, persisted in carrying out his research work, which is now admired all over the world. He is 69 years old today and his thinking is as clear as ever. It is quite obvious that Stephen has made his life meaningful by realizing Creative & Attitudinal Values. 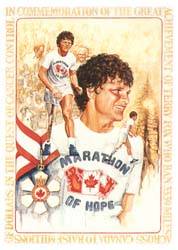 Terry Fox is another example of courage against adversity. For this young Canadian, the necessity to reflect on the meaning of life was thrust upon him early in life. Two days after his 18th birthday, Terry learned that he had a cancerous tumour in his right knee. His leg had to be amputated immediately, since the cancer could spread through the rest of his body.

He spent little time wallowing in the trap of self-pity. Two weeks after surgery, Terry began chemotherapy. The cancer clinic and the painful treatments were a reminder to him that almost half of all cancer patients never recover. He decided he wanted to do something for the people who were still there. He decided to run with his artificial leg all the way across Canada to raise one million dollars to fight cancer. He would give this money to the Canadian Cancer Society.

On Sept. 1, 1981 after running three-fifths of the way across Canada, Terry Fox had to leave his errand. The cancer had spread to his lungs. By the time of his death, in June 1982, he had raised over 24 million dollars. Can anyone say that his life was meaningless ? Like Stephen Hawking, Terry Fox too made his short life meaningful by realizing Creative & Attitudinal Values.

Don’t you consider yourself lucky that you are endowed with physical and mental abilities which many cannot take for granted, which offer you the potential to realize all the three kinds of values (unlike many unfortunate others), to make your life tremendously meaningful ?

Well then, please get down to it, and wish you all the best in life.