If there is a Nobel Prize for hypocrisy then the religious forces would have a tough contest among themselves. It could be anything from the attitudes of Roman Catholic Church to priests’ outings with young boys to Mullahs molesting young girls to our legislators watching porn in the legislative assembly- hypocrisy seems to be a monopoly and the stronghold of the religious revivalists. The recent incidents show us the double-faced hypocrisy of the Sangh Parivar, their righteous indignation when exposed and all the rest of their much hyped ‘moral integrity’ of the party with a difference. Yes of course it is one. They are different because they believe in taking hypocrisy to heights never seen before.

They have been systematically attacking couples seen together in public places and preaching about morality, they have conducted ‘raids’ on pubs and such places, young people going on picnics or even events organised by educational institutions have been attacked and they have been foaming at the mouth and raving about ‘Westernisation’ of Indian cultural values. Of course the word rave here has been used on purpose here and there lies the tale. In the first week of February a religious event was organised at St.Mary’s island near Udupi- of course that the name given by the whites and there are moves to change it and also install a statue of Madhvacharya there! The event was a satsang befitting the new status of the island and was done with the pure motive of attracting tourists to this religious event. A number of Sants and Sadhvis were invited to be there for three days to live under spartan conditions for their spiritual awakening. There were events with the intention of glorifying the great traditions of Hindutva. They all danced in religious ecstasy to the singing of devotional songs and many of them were minimally dressed as they had taken vows of poverty when they joined the religious order and we have been told that there were also digambaras(those whose apparel is the air)! They all consumed satvik food like puliyogare, curd rice(items served in temples and supposedly very holy food) and such prasads. They had liquids like panchamrat, panak(liquids served as offerings in temples supposedly holy beverages) and such holy blessed concoctions. They had also taken Ayurvedic medicines for the purification of their atmas. Of course all this in the name of promoting tourism and Indian culture!

While this is what they would like us to believe, what happened there was quite different. It had to be because the party who are ruling Karnataka now are a party with a difference! It was a wild party with all that goes into such ones- and it was going on under the protection of the authorities in charge of law and order! When one does such things protected by the district administration and the powers that rule things could go on without any probems and they did. When the truth behind this so called music festival was exposed the event was over, the organisers had made their pile, the participants had their fun and once again the the Bharatiya Janata Party stood exposed for what it stands for- a motley crowd of opportunists and hypocrites. Not that the others are any better but this party takes the top post for the gap between practice and preaching! 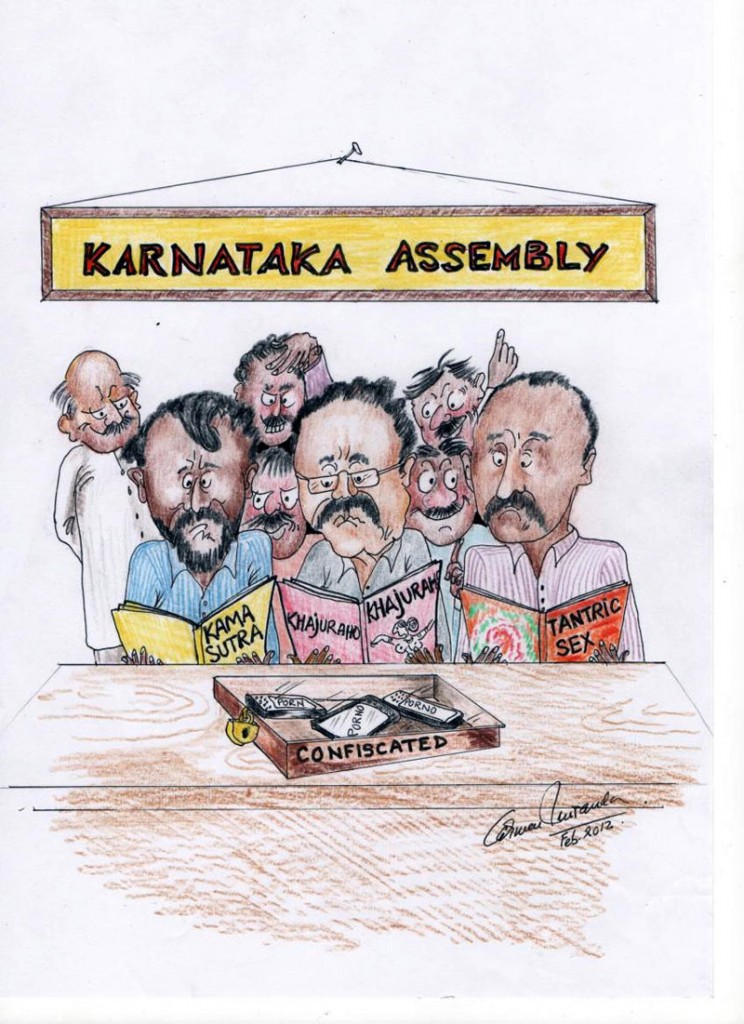 Not to be outdone and to atone for their sins the legislators of the very same party sorry the ministers were attending a session of the legislative assembly where many serious issues were being discussed like the drought in various districts. These three ministers were watching clips about how the shortage of water had been handled in the west by shedding clothes altogether and were also taking lessons in anatomy and reproductive medicine on a mobile phone belonging to one of them. The watcher was explaining one of the very critical points concerned about the welfare of women and children which were being shown on the clipping! This was filmed by a TV cameraman and these edifying moving pictures were broadcast for the world to see! Then the real miracle happened these educational clippings were replaced by pornographic footage by a conspiracy of the enemies of Hindutva and it was that which was shown! One of the ministers was so worried about the morality of his constituency that his supporters cut off electricity to the whole area! As for the other one cable TV broadcasts were stopped! Their consciousness for their voters morality was so refined that newspapers were also not allowed to be circulated on the next day! We have the distinction of one our very own involved in the episode none but the minister in charge of the district Mr.Krishna Palemar who is a philanthropist to a large number of ‘religious’ institutions and is said to be very close to a local godman. It was said that the educational material which was being viewed originated from his mobile phone while he claimed that he did not even know how to operate it!

The hypocrisy of the journalists of the district has to be pointed out here. While they write reams about the so called ‘raids’ of the moral police and about mythical things like ‘love jihad’ they did not have the spine to utter a word about the hypocrites of the saffron gang. What were written were mere whimpers! There is a good reason for that too, many of them are beholden to one of the main suspects in the whole sordid drama. While the others from other parts of Karnataka had to struggle to keep the info from reaching their voters, those in Dakshina Kannada did not have to do that. In fact, a procession was organized in support of the minister so that the reporters could do some ‘positive’ publicity for the minister. The sudden demise of Dr.V.S.Acharya also added to the smoke screen in singing praises to the departed, all the other issues were swept under the carpet or rather washed away by the tears. His  support for the polluting coal based plant, his irrational stand on made snana, the statements about saliva acting like a booster of immunity were all forgotten. It was reported that it was the suggestion of some journalists that procession supporting the disgraced minister was to be organized (and it was done too) so that they could make reports making it look like it was a spontaneous display of public reaction for sullying the fair name of an innocent person.

It is not that this sort of behaviour is something new to the district. There was not a whimper when Sri B.V.Seetharam, the editor of Karavali Ale was arrested, paraded in handcuffs in a midnight raid. This was the reaction of the authorities who were acting so at the behest of  a Jain lobby who wanted to take revenge for his criticism of the naked Jain munis going in that state in public. His only sin was that he had questioned as to why sections on indecent exposure were not applied to them! Later on the High court came down heavily upon the government and the ruling party and the press council also vindicated his stand. It was again the hypocrisy of this group and the ruling party that was exposed here.

The ex-chief minister was very quick to defend his minions – he even questioned the journalists as to why they wanted to make a big issue out of some one watching porn? He countered them with an argument that they too do it! Well, in his blind rage of being denied his rightful reinstatement as chief minister and being busy with his visits to various places of worship in a bid to seek powers of the non existent gods to bring him back to power, he had forgotten that the basic issue was not about watching pornography but doing it in the legislative assembly when it was in session and a serious discussion was going about drought in the state which was an issue that affects millions of the population of the state who have been paying for all the goings on and also a fat salary and perks to them.

As I am writing this a case of  sexual exploitation of a little girl by two middle aged males has been in the news. The rapists have gone into hiding. The issue would have caused riots here in the communally surcharged atmosphere. But, nothing of that sort has happened. The parents of this girl are poor construction workers. The culprits have been supported by a politician from the Congress party which has been attacking the ‘porn watching’ ministers. But, when worse is happening under their very noses the party has turned a blind eye to its own leaders supporting culprits who have committed such heinous crimes like raping a minor. The other major opposition party has been no better with its ex chief minister being hit by scandal after scandal for his sexual escapades.

It is not that their hypocrisy is confined only to these issues. The religious rightist fundamentalist forces have a long history of this. It is always a matter of preaching what one does not practice. While a big fuss was being made about supplying eggs to children at schools for their midday meals in an attempt to provide them some quality protein, a big fuss was made about it with statements like that they were being poisoned or something like that! Most of it from the people in positions of power who themselves do not mind enjoying non-vegetarian food. While preaching simple living and high thinking for the  masses, the ruling cliques always travel in helicopters and large entourages at public cost. While they speak volumes about greatness of our ancient culture they want the latest gadgets from the morally decadent West! While singing praises of our glorious cultural traditions of our ancient civilisation they take every opportunity to go to the moraly corrupt, decadent civilisations of the developed countries!

Well, long  live our hypocritical political leadership, you have nothing to lose but your inhibitions! The most tragic part of the scenario is that if one clique is voted out, the ones who assume power are no better. The hypocrisy seems to be increasing day by day scandal after scandal and the attitude seems to be becoming more and more brazen.

Leave a Reply to Vinay X