The year is 2032 CE and I have perhaps kicked the bucket much earlier. Ananya, my eight year old grand-daughter currently, has since become a Rocket scientist and she likes to discuss philosophical issues with her grandmother, my wife, whom she calls as “Avva” meaning Grandma in our mother tongue Telugu.

Ananya : Avva, they say that there was a Krita or Satya Yug, then a Tretha Yug when Shri Ram was the King of Ayodhya and Dvapara Yug when Lord Krishna ruled Mathura and then The Mahabharat War which started the Kali Yug which continues till today. God(s) used to descend from Heaven in those ages/Yugas and appear to Rushis/monks doing Tapasya or when Ghor Pap i.e., horrendous sins & crimes were being committed by human-like demons, they would come down to earth and do justice. Why is it that inspite of the moaning/crying of 6 million Jews, no god(s) appeared to rescue them from the Holocaust in the death camps of Hitler ? Is it because He is hiding ?

Avva : They say that this is Kali Yug and God(s) do not visit our planet in this Yug. Yes, he is said to be hiding.

Ananya : Does it mean He exists but is playing hide & seek or Peekaboo ?

Avva : Perhaps. I do not know why. The theologians say that He must have his reasons, His behaviour is a mystery and beyond human comprehension.

Ananya : Let me understand this. God(s) don’t make personal appearances or even send authenticated messages. This is a fact. So believers have to say something to explain this obtrusive fact. They claim that in Kali Yug, He doesn’t make his appearance. He is hidden. What a nice way to rationalize the whole thing !

Avva : Aren’t you being very critical of the wisdom of our ancestors ?

Ananya : Maybe. But Tata (Grand father) always used to say when he was alive, that we have to use our critical reasoning faculties before we accept our legacies & traditions. Nobody would buy the idea of an ideal, loving, concerned or involved parent who permanently hides from his children, so why buy the idea of a loving God who is hidden ?

Avva : To tell you the truth, I also felt the same for a number of years but didn’t have the courage to rock the boat.

Ananya : Avva, I have a theory. You know what ? The most obvious, simple, economical explanation of God’s non-appearance is that there are “no Gods” to do the appearing.

Avva : Now that you have mentioned it, it seems to make sense to me. Your Tata when he was alive used to tell me the same but I never took him seriously. Yes, you might be right…..

Ananya : I sure am Avva ! A kind parent, friend or benefactor doesn’t hide from you from before your birth until after your death and still expect you to feel love, trust & gratitude towards him. Why then should God hide from us ? Why is He never around when we desperately need Him ?

Avva : Our forefathers used to say that God makes himself invisible to us ” To test our Faith “.

They would say — “If humans believe in God after God reveals himself, it is no big deal. Humans have a Hobson’s choice and will necessarily have to prostrate before that God & subjugate themselves in all servility to Him, given that God is omnipotent, lest you incur His displeasure & wrath.

But if we have faith that He does exist despite the Hiddenness of God, it would be deemed as the greatest virtue a man is capable of.”

Ananya : That is cheating Avva ! A God that permanently hides and gives us no real evidence of His existence — yet considers it a virtue in us, to have faith that He does exist, despite the lack of evidence, is a God that is cheating and I want nothing to do with it, even presuming there is such a thing as God.

Everything since the Big Bang can be explained naturally, Avva. We know that scientists are pretty sure that the universe began almost 14 billion years ago with what has come to be called the Big Bang. They know that knowledge gained through science gives us a general understanding of how the galaxies, stars, and planets subsequently formed, and how life evolved on Earth from microscopic replicators to more complex organisms, all the way to the wide variety of species that we see today.

Every gap in knowledge has not been explained by science but enough gaps have been sufficiently filled so that we can reasonably infer that, the entire chronology – from the Big Bang to the rise of humanity on this obscure planet – can be explained without resorting to supernatural phenomena.

If so, this means that there is no need for a God to explain anything that has happened since the Big Bang. We can only speculate about what “caused” the Big Bang.

Avva : Maybe that’s true, but surely the Big Bang itself (or whatever else “caused” the universe to come into existence) must have necessitated a God, right?

Ananya : This speculation, however, is based on not even a shred of evidence, and reflects very human biases about causation. (That is, since we are thinking beings that can create things, we assume that the universe itself must have been created by a thinking being.)

Avva : We are awestruck by the grandiosity of the universe and the puzzle of origins, and feel that “there must be something.”

Ananya : Yes, there must be something. But to nonbelievers, that something equates to explanations that have not yet been discovered. The difference between believers and nonbelievers is that the former insist that the “something” must be defined as a being with intent, or at least a mysterious “higher power.” The nonbelievers like us, on the other hand, take a more humble position, simply conceding that these questions cannot be answered based on current limits on knowledge.

However one thing is certain. There cannot possibly be a God because of the existence of evil and human suffering caused by it.

If God is supposed to be omniscient, omnipotent & omnibenevolent, then —

If God is omniscient, he knows all about the evil in the world.

If God is omnipotent, he has the power to prevent the evil from occurring.

If God is omnibenevolent (perfectly good), he would wish to prevent all the evil.

But there is evil.

Therefore, there can be no God with these attributes. 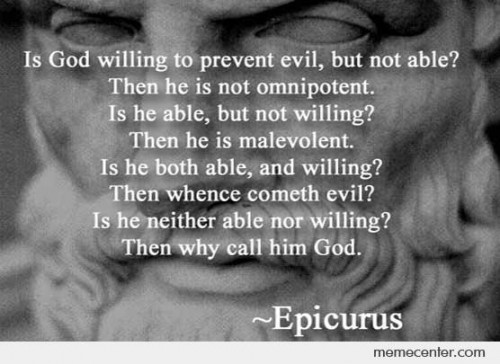 Avva : But according to western philosophies, man has Freewill. God has given human beings the gift of “freewill” and it is because of human misuse of this gift that evils arise ( Otherwise humans will be like “Robotic automatons” and God doesn’t get any pleasure in creating such unintelligent creatures). Why then blame God for all these ? Then again in Eastern philosophies you have Karma & reincarnation. Because of Bad Karma in past incarnations, humans have to suffer in this life. God has nothing to do with it.

Ananya : “Human misuse of this gift” did you say ? Maybe this kind of evil comes from man’s inhumanity to man and might have resulted in slavery, torture, wars and murders but what about Natural evils like Floods, Tsunamis, Volcanoes or Earthquakes ? You talk so glibly about karma, Avva. This was a very convenient construct to make people reconcile with their lot. Reincarnation ? This is another fiction. If that was true, how do you account for the rapid rise in human & animal population ?

Ananya : People living in these dangerous places have no where else to go. That is their home. They would much rather do fishing and stay near the seashore or cultivate their crops on the fertile slopes of a volcano than migrate to other places and beg for a living.

Then again your God has created an animal world divided into herbivorous & carnivorous creatures. One consequence is that the ‘flourishing’ of some absolutely requires the ‘suffering’ of others. This evil has nothing to do with human freewill. God could have made all animals herbivorous. Obviously an omnibenevolent God doesn’t exist. And if he is omniscient & omnipotent but not omnibenevolent, I don’t care to worship such an evil monster.

Avva : I totally agree with you and just like you, I am a secular humanist too. I was only playing the “Devil’s advocate” ! Ha ha ! I only wanted to test your scientific temper and critical reasoning faculties. You are good. That is why you have become a successful rocket scientist. We are all so proud of you !