This article was prompted by a discussion on Nirmukta Facebook group on the usage of the word “bitch”. It examines the historical contexts under which these words originated and their current usage. It tries to build an argument from hypothetical scenarios, thought experiments and contemporary feminist thought on sexist and misogynistic language. The article also suggests alternative words to be used and popularized in order to prevent avoidable discomfort to marginalized groups.

When it comes to the usage of word “bitch”, many people agree that it is derogatory when used against a woman – damning and vilifying her person; it’s even wrong to use again

st a man by trying to portray him as a woman, or a subordinate. Traditionally, “bitch” is also used to refer to a female dog. But usage of “bitch” in its original context – to refer to a female dog – is widely acceptable. I shall primarily present my arguments against the usage of word “bitch” under any context and circumstance. I shall try to draw analogy from hypothetical scenarios and from usage of other similar offensive words like “fag”.

Merriam Webster gives us the following meaning of the word “bitch”:

1: the female of the dog or some other carnivorous mammals

2a: a lewd or immoral woman b: a malicious, spiteful, or overbearing woman —sometimes used as a generalized term of abuse

3: something that is extremely difficult, objectionable, or unpleasant

Note that the second and third meaning are already explained in the summary section of this post; and most people agree that it is a derogatory and offensive word to use against a woman and even against a man. There is not shred of doubt that it should be abhorred under all circumstances. However, when we consider the first meaning conveyed by the word, the unanimity seems blurry and unclear. In simple terms, most people find it acceptable (or rather, not offensive nor objectionable) to use when referring to a female dog. Are they right? Perhaps they are. After all a female dog can’t take offense and won’t know in any case what does the word mean? Is it oversensitive when somebody takes offense?

However, I shall argue why it can be wrong to use “bitch” even in such cases, through hypothetical scenarios and thought experiments. Consider the following scenario:

You are jogging in a lawn and you encounter one of your female friends, jogging with her pet dog. Incidentally, the pet dog she carried her with is a female dog. You greet your friend, “Hello, good morning”. And, after exchange of greetings, you also ask her about her pet dog, “How is that bitch doing?” Your friend gives you a puzzled expression hearing the word “bitch”.

From the above scenario, though hypothetical, but not highly unlikely, we get to learn that usage of word “bitch” even while referring to a female dog can distract one’s attention, and disturb the audience present, especially if there are women present among them. The word is often used in a derogatory and offensive manner, and has a history of negative connotations and derogatory baggage, which can affect the sensibilities of your audience even if you don’t mean it. It reminds them of the discrimination and oppression they are still subjected to. It can be demeaning, alienating and infuriating to a woman. The point I want to stress is, words have different meanings and contexts, and even when one uses a word which has a history of bigotry without such intention or context, it can disturb the target audience.

I will further explain the disturbing nature of such words using another example using the word “fag”.

Now, the word “fag” too has different meaning. “Fag” can mean:

2:  A derogatory and offensive slang to denigrate homosexuals. Fags were often identified with a bundle of stick used to burn heretics and sexually “deviant” persons in medieval Europe.

You are having a good time in a coffee shop with your friends. One of them is gay and you are aware of that. You feel the urge to smoke and you express it to your friends: ‘Guys, Let’s smoke some fags! ‘   After hearing this, your gay friend gives you a concerned and puzzled expression as if to express his displeasure.

In these above scenarios , the words “bitch” and “fag” were used in an innocuous manner with no derogatory intent. Yet, they had the unintended effect of disturbing the target audience present. The negative history and associated oppression affects and reminds people of the continued discrimination they still face. This shows that sometimes, not only intention, even mere usage of those heavily loaded words can be misleading and offending. The point that I want to stress is, why use words which have fallen into misuse and can be which misleading and offending even when used in seemingly innocuous manner as illustrated above? Surely we can use alternative words that are both civilized and acceptable?  The alternatives to these words are more popular and readily accessible than these specific words. Please think about it.

Some people might object– “It’s difficult to keep track of so many words that have fallen into misuse and it won’t be practical to keep eliminating them”. However, as facts from history suggest, many such derogatory and offensive words with racist, sexist and ablist connotations have become obsolete. As society changes with time, its values and language evolve alongside. It’s a slow gradual change. I don’t aim to ban words nor encourage maintaining a list of such words and keep referring to them when required. Rather, I ask for introspection and self-censorship whenever required. There are people, less privileged than you, for whom words like “bitch” and “fag” are alienating and infuriating. As Melissa McEwan of Shakesville writes in her post “On ‘Bitch’ and Other Misogynist Language”,

“What I am is more sensitive to how misogynist language affects women, because I am one. People of color are more sensitive to racist language (particularly racist dog whistles, for example) than I am; that doesn’t mean they’re too sensitive. When a reader pointed out to me that my use of the word “lame” to mean “stupid” could be offensive to disabled Shakers, it wasn’t that she was too sensitive; it was that I was not sensitive enough. It means that (duh) I still have… to learn in this world. “

Moreover, the onus is not on the oppressed to not get offended; the onus is on the privileged to not engage in said offense. So, justifying usage of derogatory words by telling someone to get over it, is an unacceptable excuse. When an opportunity is available to prevent such situations from occurring in the first place, it is imprudent and unethical to use such words. Language plays a crucial part in perpetuating prejudice. So, it is essential for  freethinking humanists to use language that can further along their humanistic goals. There are many alternatives to the words in question which are more commonly used: “dog”, “female dog” and “dam” when referring to the female of the species “dog”. As for ‘fag’, there is “cigarette”, “ciggy”, “smoke” etc.  The alternatives are so common that one doesn’t even have to refer to a dictionary to know about them. Using alternative words is both practical and possible, and it doesn’t affect the quality of discourse either. This becomes even more important in social gatherings, both online and real-life – a Facebook group, a workplace, a dinner party, a classroom, a conference – where people in the group do not have the benefit of knowing you well – i.e. they cannot be sure “where you’re coming from” or “what you really meant”. Another thing to note is that using such words in casual language trivializes their context, and creates an environment where people who really do mean them as slurs can do so without fear of criticism. 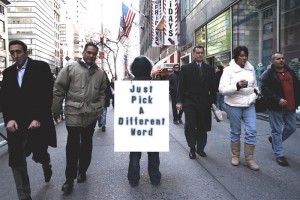 An objection that is often raised whenever self-censoring of derogatory words are being discussed is “reclaiming” of words is more effective than banning or discouraging usage of words. The reasoning given is such a reclaim is empowerment. Examples of  reclaimed words like queer and gay are often cited to support their argument. There is no doubt that people have successfully reclaimed those words to a greater success. However, historically it is also known that reclaiming of words is very difficult , if not impossible. Many ethnic, racial, sexist and homophobic slurs which possibly originated in a totally inoffensive context have never been reclaimed. They are almost always replaced with more acceptable words. However, a few important points need to be remembered concerning reclaiming of words:

Some people object that a language check doesn’t address the root cause of such behavior,  i.e. it can’t help reduce homophobia, misogyny, racism and so on. This cannot be further from the truth. Language is the medium of propagation for ideas – both good and bad. Language has played a crucial part in our history and continues to do so. It is both empowering and enriching. However, with such a powerful tool, there often come dangers too. It is the medium through which malicious ideas and prejudices also get propagated. So, it is absolutely essential that language is examined with scrutiny. I understand that this would not solve the world’s problems but it would be a better place to live in. We might even strike at the root of the problems sometimes – e.g. if people feel compelled to hide their homophobia via such language checks, then they are also being denied the opportunity to spread such beliefs.

Freethinking and secular humanism come with certain responsibilities guided by sensitivity and ethical reasoning. We must realize why it is imperative to civilize our vocabulary with self-scrutiny, and adopt a self-questioning, self-correcting attitude. By discouraging the usage of marginalising words, we are not only promoting our cherished humanist values, we are also helping in making the usage of such words obsolete. This post is not to encourage censorship and micro-monitoring in a free and democratic forum. There is a difference between censorship, and civilized, sensitized language, and I hope I have adequately explained that in this article.

(Thanks to Gayathri Iyer, Lalit Mohan Chawla and Sunil D’Monte for their valuable inputs.)

I am a non-religious person. That is, I don't believe in gods or God of any sort .

Now that I have told you about my 'religious' beliefs , let me elaborate further . I don't stop there . Being non-religious doesn't mean I have no other ideological leaning . To tell you , I am a secular humanist as well as a feminist. By shunning supernatural beliefs , I derive my strength and comfort from purely naturalistic explanations. I believe Science and Scientific Evidence is supreme in all spheres of life; and I earnestly pursue for promoting Science , Freethought and Skepticism in India using social networking sites like Facebook.

I am an avid nature and wildlife lover . Especially tigers . And I am also a science enthusiast , rationalist and humanist , progressive, pragmatic and optimist , skeptic and naturalist and many other things . I also love photography , long rides on bike. Music , Books are my passion . And I love visiting new places ; both crowded cities and quiet nature , archaeological sites and historical places.

I am also a Software Developer by profession.

This is a short and honest attempt by me to tell you briefly about me. I hope I was clear enough.