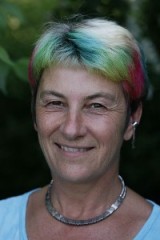 Dr. Susan Blackmore is a freelance writer and lecturer based in England. She was involved in research in Parapsychology for years and then stopped doing it in 2000 when “careful experiments showed that there were no psychic phenomena – only wishful thinking, self-deception, experimental error and occasionally, fraud.” Dr. Blackmore was in Chennai, India recently and on 25.1.2012, she gave a talk on “Mysteries of the Mind” at The Rationalists’ Forum, Periyar Thidal. I interviewed her for a few minutes just before the talk and she answered the questions with admirable involvement and passion.

This is the edited transcript of the interview.

Good evening Dr. Susan Blackmore.
Could you tell us about your journey from being a believer in the paranormal to becoming a skeptic. How difficult was it?

I had an amazing Out of Body Experience once after I had smoked some dope and it seemed to me that there was something more out there. It looked like I was going down a tunnel towards a bright light. I felt some spirit went out of my body and roamed around and it actually seemed so real and so intense. I became so involved in this and I wanted to know more. I wanted to prove all my lecturers wrong as I thought there was more to mind, beyond the brain. So I started studying Parapsychology. But when I started my experiments and it showed no evidence, it was quite difficult. All the results could be explained as chance and when I investigated other claims it turned out to be not true either. Sometimes it was even fraud. It amounted to changing everything about what I thought; but you know, I was more interested in truth than anything else. It was difficult but it was possible! And when it is done once, it is easier to do it again. So I was no longer frightened of being wrong. Whenever I had a theory or I was trying out an experiment and it turned out to be wrong, I told myself ‘Okay I will do it again.’

So has it happened? Have you found out again that you have been wrong on some other occasions?

Oh yes! I had tried various theories of Consciousness and I found that I was wrong. But I kept moving on. Because that is what Science is all about. You find out one thing and you build on that; but when you go wrong, you start again. It is always changing.

After your fascinating Out of Body Experience, you decided that you wanted to study Parapsychology against the advice of your lecturers and other researchers. And you had invested a lot of yourself, in terms of time, money and ego in your research. So when you were confronted with evidence, rather the lack of it, what was your initial reaction? How did you find the courage to keep going?

Yes of course, my lecturers did advise. But well, I did not believe that I could be wrong. Initially I thought if that does not work, I am sure this does. And if this doesn’t then may be this does; so I was always looking for something that would work. I kept on thinking, ‘just this once more I would experiment,’ because I had built a lot of hope. But then it failed again and again. And then there came a point when, I can even remember where I was – in my house, in the bath, when I thought: ‘What if it is all rubbish? What if none of it is true?’ That was a very hard moment to come to. But I just had to get on to the truth.

So are you saying it was one final dawning moment?

Yes, I think so. I kept on building and building and at one point, phut… everything fell down. I suppose it was made harder by the fact that I had given up the possibility of a career. I had made myself unemployable, atleast that was what I thought; it actually turned out not so bad after all. But I didn’t care…I didn’t care about any of that, you know. I just wanted to find out. 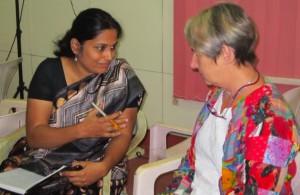 Coming to Memetics, why do some Memes survive and spread while some do not? Is there an equivalent for fitness like in genes?

How do you think the meme of ‘Atheism’ can spread against the contrary meme of ‘Religion’ which is quite well-entrenched?

If I knew that I’d be spreading it as often as I could. So I don’t know the answer. Part of the answer is teaching children comparative religion. When my two children were small they had religious education in school. One week they’d study Buddhism, the next, Islam, the next Hinduism, and they’d quickly conclude that all of them can’t be true. That simple conclusion starts a general scientific approach and scientific enquiry develops. That spirit of inquiry would hopefully inform all aspects of life.

There is no one generally accepted definition of Consciousness. ‘What it is like to be me; who I am; why do things look like this and feel like this.’ You can say it is awareness; it is subjectivity. So it covers all from being in here and experiencing the world. I think that if we ever fully understand Consciousness, that would undermine religion in a big way.

Legalization of Drugs – Don’t you think subsequent enforcement of regulations would be very difficult and there would be several cases of addiction.

If all the recreational drugs in Britain and the US were made legal, I think addiction would drop. That is only a guess. But what we know for sure is that crime would drop dramatically – there would be no gang wars; the prisons would only be half full. Imagine what it would mean to have only half the number of prisoners and those there are in the prisons we would be able to rehabilitate. Imagine the poor farmers in Afghanistan, in Pakistan, in South America who are terrorized by gangs running the drug trade – they would be able to sell their drugs legally to us, to be able to sold in shops in correct doses and with regulations. Children would have true education about drugs and would be told the truth instead of being told lies you know instead of being just told ‘say no to drugs.’ I hope children would grow up in a culture understanding which drugs do what, which drugs can be used safely, which ones are harmful and addictive and so on…all of these. I think it is the most important thing we could do to change the world today.

But don’t you think addictions would increase?

No I don’t think so; addictions would dramatically decrease. That’s the point. I will tell you why. In Britain before the 1971 drugs law, there were only 17,000 heroin addicts in Britain. They could all get prescriptions from their doctor and many were able to live reasonably normal lives. When the new law was imposed on us by the USA this stopped, and addicts had to get their drugs from criminals. As a consequence we now have countless hundreds of thousands of addicts. We don’t know how many, where they are, and they cause huge levels of crime and distress. Many die because the heroin they get is unclean and unpredictable. The problem is caused not primarily by the drug itself but by making it illegal. We could avoid all that by legalizing recreational drugs and educating people about it.

As a growing community of freethinkers, we encounter many people who think there just might be some truth in some paranormal phenomenon like telepathy or ESP. How do you suggest we talk to them without coming across as ‘close-minded’ people?

Oh that is too difficult. I always get very angry. Only thing I can say is ask for evidence for their claims.

Thank you, Dr.Blackmore, It was a pleasure talking to you.