Summary: This article examines a form of victim blaming, where the “spotlight” of discussion and the “burden of change” are placed on the victim instead of the perpetrator. Doing this has the subtle effect of altering discourse to be about the victim – what they did in the lead-up to the crime, their past history, how they could have avoided the crime, and so on – when it should in fact be about the perpetrator.

I’ve written about the social psychological underpinnings of victim blaming before. Essentially, the Just World bias makes us believe that people deserve what they get, and that if bad things happen to someone, they must have done bad things for it to happen. Now, when somebody says “victim blaming”, the classic picture that comes to mind is that of a horrible wicked person saying “You deserved it!”. In real life, this seldom happens. For one, such people are smart enough to know that in today’s more enlightened world, you simply cannot say such things in intelligent company and get away with it. Secondly – and this is the insidious thing about victim blaming – even well-intentioned people can blame the victim without realising it.

Below we’ll take a look at a case study of victim blaming, where the followi 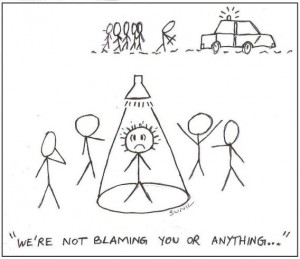 1. The Spotlight: The focus of discussion is on the victim, not the perpetrator. This is true literally in terms of the number of words devoted to each, and also in terms of where the writer is focusing their research/investigation.

2. The Burden of Change: The responsibility of prevention/solution is put on the victim, not the perpetrator. This is usually implicit rather than explicit, and is often intermixed with point number 1.

3. Denial / Protestations to the Contrary: The person will claim that they are not blaming the victim, while proceeding to do just that (via points 1 and 2).

On 2nd November 2011, the Paris office of the French satirical magazine Charlie Hebdo was destroyed in a petrol bomb attack. It isn’t yet known who did it, but given that their previous issue had mocked radical Islam, was jokingly renamed “Sharia Hebdo” and was “guest-edited” by the prophet Muhammad, it is a reasonable guess that Islamists were behind it.

Time Magazine published an online piece about the bombing, titled Firebombed French Paper Is No Free Speech Martyr. I recommend you read the article in its entirety, for it is quite remarkable. Let’s see how it fares with respect to the victim blaming pattern I mentioned above:

1. The Spotlight: The article focuses exclusively on Charlie Hebdo’s behaviour. First it talks about the magazine issue in question and its contents. Then it looks back into the magazine’s past – did you know that in 2007 they reprinted the “controversial” Danish Muhammad cartoons? Shocker. It goes on to criticise the magazine’s insolence, calling it “self-indulgent” and “wilfully injurious”, and continues with heaps of concern about abuse of free speech, Islamophobia, burqa ban, etc. There is hardly a word about the people who bombed a building because they didn’t like the words that came out of there. You would think journalists would want to look into why someone would do that – interview some terrorism experts and psychologists perhaps? Nope, not here.

2. The Burden of Change: This is implicit throughout the article – it all but screams “Don’t mock Islam and they won’t bomb you”. No mention of “Don’t bomb people” anywhere. I.e., the burden of change is implicitly on the critics of Islam, not the Islamists.

3. Denial / Protestations to the Contrary: There are three points in the article where the author offers support to Charlie Hebdo – in a sense saying “I’m not blaming you or anything”:

“Sorry for your loss, Charlie, and there’s no justification of such an illegitimate response to your current edition–”

“[I]t’s just as clear that intimidation and violence must be condemned and combated for whatever reason they’re committed—especially if their goal is to undermine freedoms and liberties of open societies.”

That’s three sentences of support – qualified support in fact – amidst a 1,229 words-long article. Blink and you’ll miss them. After reading the article, the overarching sense one gets is: Charlie Hebdo was wrong and had it coming. They should change their ways or expect things like this to happen to them.

And then there’s the concluding sentence, which starts with some more support, but then undoes it all with a moral equivalence so revolting it beggars belief:

“So, yeah, the violence inflicted upon Charlie Hebdo was outrageous, unacceptable, condemnable, and illegal. But apart from the ‘illegal’ bit, Charlie Hebdo’s current edition is all of the above.”

Once you learn to identify this pattern of victim-blaming, you will notice it time and again. The recent statements by high-ranking Indian police officials attributing rape to the clothes women wear, for example, focused on what women wear, implicitly putting the burden of change on them. And the spotlight – the media storm that followed – focused on this issue, not the men who are doing the raping.

Geetha T.G. has pointed out another trope that is often seen in victim-blaming – what one might call the helplessness of the perpetrator. While the spotlight is on the victim most of the time, it is shone on the perpetrator for an all too brief moment either to commiserate with or to bemoan the helplessness of the perpetrator, who is cut some slack, as if to say, “What else could you expect, in the light of such behavior by the victim?” The crime is cast as a natural reaction, even Greek tragedy. And thus the seam between the perpetrator and victim dissolves, and their roles become equivalent in the eyes of society. This New York Times report on the gang rape of an 11-year old girl offers an appalling example:

“The case has rocked this East Texas community to its core and left many residents in the working-class neighborhood where the attack took place with unanswered questions. Among them is, if the allegations are proved, how could their young men have been drawn into such an act?

“‘It’s just destroyed our community,’ said Sheila Harrison, 48, a hospital worker who says she knows several of the defendants. ‘These boys have to live with this the rest of their lives.’”

No one is immune to victim-blaming; but by identifying victim-blaming bias in ourselves, we can start a process of self-examination – of second-guessing our words and actions, like a freethinker should. So the next time you’re discussing some injustice with a friend, and you find yourself talking more about the victim than you are about the perpetrator, stop for a minute and ask yourself: Am I blaming the victim?