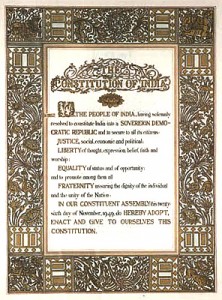 India celebrated its 63rd Republic Day this year on 26 January, marking the anniversary of the implementation of the Indian Constitution. As citizens we must reflect upon the constitutional rights and liberties guaranteed to us by the law of the land. The Preamble to the Constitution states clearly that India will secure “LIBERTY of thought, expression, belief, faith and worship”. But one must ask the question if the country is still true to these foundational institutions. We are now living in uncertain times where the promises of free speech are steadily but surely violated: our voices on the Internet are being stifled and any opinion that is deemed “inflammatory” or “offensive” is hastily shut up with the clumsy explanation that the very fabric of national integration may be destroyed. Difference of opinion, especially in a theological context, is feared to be a harbinger of unrest and invites threats of terrorism. The recent controversy of Salman Rushdie’s freedom of speech rights being vulgarly gagged shows how the threat of violence pervades even the most fundamental rights of expressing one’s opinions; even if they are polar in nature to that held by the majority (or a minority). It is in this context that an essay written by British philosopher John Stuart Mill in 1859 is worth revisiting. This brilliant essay examines the extent of society’s hold over the individual and assesses the important, but not often discussed ideals of social and civil liberty. Although these liberties can be considered as forever present in societies both ancient and present, they have to be constantly reviewed and discussed, even at the risk of splitting opinion amongst the populace. This essay illustrates how words penned nearly a century and a half ago still hold relevance to societies and democratic governments of present.

Liberty as a means of fending off despotism

Liberty means the protection of the people from the tyranny of those who rule over them. In ancient times, the people were ruled by one individual or several individuals who were bestowed the position by virtue of being conquerors or by hereditary right (save for the Greeks). The rulers were in essence, double-edged swords: their power could be used to fend off enemies or could be directed at the proletariat. Thus to prevent such machinations, the people sought to limit the power exercised over them by the aforementioned rulers in two chief ways: political liberties were granted and if these were violated, retaliation was justified and by the means of constitutional checks and balances (introduced subsequently as democratic frameworks replaced existing regimes).

But as the ages passed, rulers no longer occupied a position antagonistic to the position of the people they ruled over. Rather the people wished their masters be appointed and removed solely at their pleasure and so the above concepts of liberty had to be suitably revised. A democratic set-up assumed that the people needn’t be protected from themselves, but over time the individuals who assume power may no longer be representative of the individuals who elected them to office and may come to represent only a majority rather than being all encompassing. Therefore among other societal evils, the tyranny of the majority is one to be wary of.

Social tyranny and its influence on liberty

However, society itself– the collective rather than the individual- can tend towards tyranny and manifest it in manners besides elected political officials. Social mandates can be imposed on society with negative consequences because it will try to penalize the individual whose ideas and rules of conduct deviate from those deemed acceptable by the majority. Thus social tyranny can be equally formidable or more so than political tyranny as the former seeps into the finer details of daily life. A limit must therefore be discussed and drawn such that collective opinion does not encroach upon individual opinions and preferences.

But what exactly is this is limit and how is it drawn up? The author believes that the question is yet to be correctly addressed. He then says that guidelines that deal with human conduct are often dictated by personal opinions rather than by hard reasoning. Indeed, one’s own opinion is often the golden standard of judgment and one sympathizes with beings who share that worldview. But if these individuals decide the rulers, do they not also impose on individual liberties, vicariously, through the government they create? The author simply states that the interference of the government is “improperly invoked and improperly condemned”.

The essay tries to point out that the reason for imposing control and coercing the individual or in essence interfering by means of physical force, legal penalties or the like is for self-protection. The only occasion where power can be exercised forcefully against the wishes of a member of a civilized community is in order to prevent harm from befalling others. The author however has a different opinion for societies that are still ruled by barbarians and opines that the principles of liberty do not apply in a time when free and equal discussion is nonexistent. But once such a society comes of age (even if it was guided by the hands of a despot), compulsion is no longer viewed favorably, save in the case of protection of others.

Freedom to be yourself

The introductory is concluded with what liberties are granted for the individual. They include the liberty of thought and sentiment, the absolute freedom of opinion on all areas including moral or theological, the liberty of living one’s lives as one sees fit without impeding the lives of others and also the freedom to unite with other individuals for any purpose (whilst adhering to the caveat of not inflicting harm upon others).

To truly summarize the essence of the introductory and to whet the reader’s appetite to pursue the remainder of the work (freely available online), I quote Mill:

No society in which these liberties are not, on the whole, respected, is free, whatever may be its form of government; and none is completely free in which they do not exist absolute and unqualified. The only freedom which deserves the name is that of pursuing our own good in our own way, so long as we do not attempt to deprive others of theirs, or impede their efforts to obtain it. Each is the proper guardian of his own health, whether bodily, or mental and spiritual. Mankind are greater gainers by suffering each other to live as seems good to themselves, than by compelling each to live as seems good to the rest.