The few and rare critical reviews of the Gita

I am providing here a link on my blog to an excerpt of an introductory chapter of a book that critically evaluates the social and cultural impact of Bhagavad Gita (BG) on India. This book “The Role Of The Bhagavad Gita In Indian Life” was written by Premnath Bazaz ( a Kashmiri Pandit and freedom fighter). I have searched high and dry for this book with no success so far. There are really very few works that take a critical and dissenting look at the Bhagavad Gita. The other comprehensive one is ‘The truth of the Gita’ by VR Narla an eminent Telugu journalist. A historian of repute, DD Kosambi has also made some observations about the Gita, but never apparently published any full-fledged study of this scripture. BR Ambedkar analyzed Vedas, Upanishads and other works of Vedic liturgy in a great amount of detail and went through many of flaws of contemporary Hinduism with the precision of a scalpel, but did not write a book per se on the BG. All these four above are no more. And of course none of them except for Ambedkar to some extent were taken seriously. As for those living, other than the blogosphere, there seems to be no writer of repute to bear the cross of questioning the moral and social credentials of BG. 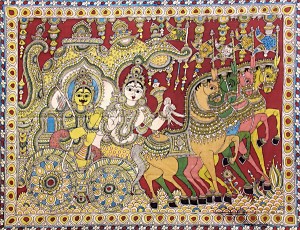 My thoughts upon reading the conventional versions of the Gita

As for me I have read at least four English translations of the Gita and two of them were by Indian authors and also commentaries on some of its verses by spiritual cult leaders like Chinmayananda and Prabhupada. I was struck by the following inconsistencies that were fairly predominant in the scripture:

What struck me about the commentaries and other eulogies of the Gita, was that the authors seemed to look at the verses in isolation and whether unintentionally or not, ignore its relations to other verses and chapters and to even broad ideas espoused by the scripture (Karma, moksha, punarjamna, bhakti, atma, ego). Many of such authors are also silent on whether there exists a hierarchy of yoga method (Karma, Jnana, Dhyana, Bhakti etc.) or not, with most taking the line of least resistance which implies any or all yogas are equally good and the more the merrier. The curious part is that when Arjuna poses a few questions about comparative merits of the yogas and which is precedent and/or superior to the other, it is usually met with evasive, political and CYA replies from Krishna, whom our Hindu religious and spiritual cognoscenti never tires of applauding as the greatest and wisest teacher of humanity. Anyone who makes a comparative study of the current state verses of the Gita, devoid of religious blinkers, will find the character of Krishna coming across as very cynical, evasive, inconsistent, shifting philosophical stances according to convenience, mixing ideas of differing schools of thought at will (Sankhya, Yoga, Vedanta) without any care or regard for their cogency and coherence. How such an opportunistic and willful entity (seen together with his role in the Mahabharata) be passed off as a God and that too raised to the towering heights of religious and devotional frenzy, may forever remain one of the greatest enigmas of Hindu culture.

The few and rare critics of the BG have labored to point to the casteist and sectarian agenda of the BG as the most realistic basis of its composition beneath all its specious and pretentious gloss and dross of philosophy, metaphysics and devotional appeals. To accept the plausibility of such a kind of devious strategy of the Gita, it is important to place into historical context the failure of the two foremost texts of Brahmin theological dogmatism ( Mimamsa Sutras by Jamini and Brahma Sutra by Badarayana) in the post-Vedic age in stemming the rising tide of heterodox movements like Buddhism, Jainism and Lokayata. It is quite likely that both Jamini and Badarayana may well signify pseudonyms of the prominent or active factions of Brahminical demagogues of their times, out to defend the primacy of the Vedas and Upanishads. Which is what they actually tried to do by means of these two long, prolix and tortuous treatises dealing with the relative merits of the two most fond theological dogmas of ‘Karma-Kanda’ (part of life devoted to the act of ritual and propitiation) and ‘Jnana-Kanda’ (part of life devoted to the act of knowledge seeking) and dueling for their primacy. Though both the treatises run into hundreds of verses, with Mimamsa Sutras being the longer of the two, being replete with laborious yet ludicrous arguments to validate the infallibility of the Vedas and Upanishads, they are not worth the paper, leaf or parchments they were written on. In the light of today’s atmosphere of rational and critical thinking, it is amazing that these tomes, whose utterly primitive and nonsensical philosophy can be demolished with a few pages of questioning and critical analysis, were the subject of many long running debates. When four orthodox brahminical philosophies (Sankhya, Mimamsa, Nyaya and Vedanta) could not deter the march of the simple yet appealing thought system of Buddhism, the shrewd Brahmin strategists of the era of post-Mauryanism unsheathed the ultimate weapon of the Bhagavad Gita, which was a clever mish-mash of philosophy, social rules, creationism and devotion tailored to sound like a very good clone of the Bible and the Koran. Thus BG provided a tottering Brahminism the resilience and vigor to overthrow Buddhism and take Indian civilization back to the dark ages, from which it has never emerged into light.

What inspired me into a ‘forensics’ of the Gita, were some articles in the blogosphere, specifically Nirmukta’s BG series by Dr. Kamath, which explored these red flags of contradictions by quoting and comparing many of its verses esp Chapters 2, 3 & 4, where most of the philosophical conflicts between the Vedic, Upanishadic and Bhakti schools of thought come through in some of its more confusing verses. This probably prompted his hypothesis of the multiple authorships of the BG along with suspicions of its varied interpolations, additions and corruptions. While I was sparring with a dyed-in-the-wool Hindu nationalist of my acquaintance, on a different related issue, this charge was dismissed by him as a standard Marxist line. This introduction from the book of Bazaz, explores this theme in quite a bit of detail, quoting historians on both sides of the fence of this argument, with their theories and observations. The author of course leans to the side of naysayers of Gita, but advances many reasonable arguments in his defence I don’t know if the taint of Marxism will ever go away for critics and dissenters of religious obscurantism, but I hope this discussion and article may be found to be of some interest.