Loosely translated into English it means taking bath on left overs but a detailed one would mean rolling over the leaves on which others have eaten and discarded. Again, a lengthier one would be lower caste people rolling on the leaves on which Brahmins have eaten! This has been taking place since hundreds of years if some are to be believed. Again, if some others are to be believed, it is a time honored tradition which has sanction of ‘scriptures’. This happens in quite a few places and as a child I have observed the same when I used to go to temples with my mother. But, I am told that it was and is still an affair which happens between people of the same caste that is GSBs (Goud Saraswat Brahmins) performing this act on leaves on which the members of their own community have eaten.

But, what happened at the Kukke Subrahamanya Temple is something totally different. Here the scheduled tribe people performed this act on leaves on which Shivalli Brahmins have partaken food. This again brings to the fore many issues which have to be discussed in detail. This temple is, to put it mildly, not as popular as the one nearby at Dharmasthala. The latter being owned by a Jain has drawn more people particularly from the other side of the Western Ghats and subsequently has higher collections. The owner of this temple has been also running many capitation fee colleges and businesses. In order to compete with it, the management of the Subrahmanya Temple has been trying its best to get publicity. Its speciality is providing solutions for naga dosha which in loose translation means problems due to cobra or serpent trouble!

These problems could be anything from sterility to skin diseases. Once diagnosed the performance of proper prescribed rituals could result in relief from the associated problems. So, any one going there could be diagnosed with that. Since the dosha or the fault can carry on to several generations it could be said that your grandfather or great grandfather could have performed some act which would have caused harm or angered some serpent. So, that could be set right by performing some rituals which could expiate these sins and hence relieve the victim of the associated problems. 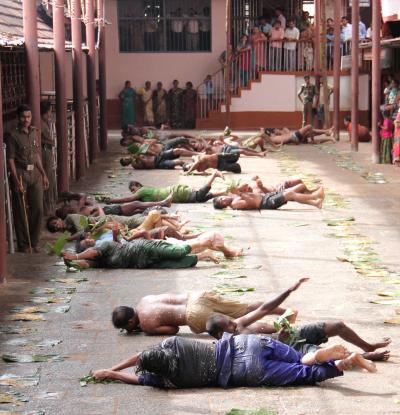 One usually sees a large number of people alighting from the train from Bangalore to Mangalore at the Subrahmanya road railway station which is the nearest one to this temple. So, the whole place thrives on the business of ridding people of the sarpa dosha! As already said it has been competing for popularity with the temple of Manjunatha at Dharmasthala which is paradoxically a Hindu temple owned by a Jain! Though the latter is far ahead in popularity, the former cannot be blamed for not trying its best! In fact they have provided ‘relief’ from the serpent affliction to quite a few VVIPs like Sachin Tendulkar, Aishwarya Rai, Amitabh Bachan to name a few. But despite all these the former remains far ahead in terms of popularity( in other words collection of cash).

So, the word has gone around that the ritual of rolling over the leaves on which Brahmins have eaten can cure a number of skin diseases and also other things like bestowing children on sterile couples. But, if one goes by the history of such practices, it looks more like a rite for the down trodden to perform to demonstrate their loyalty to the upper castes who have partaken food on these leaves. In this temple which is run by Shivalli Brahmins, their community is served separately and the others have to eat outside like all such places. There are instances where people have been forcibly evicted from the places reserved for this community! It has been done not just to the supposedly lower castes but even to Goud Saraswat Brahmins who though call themselves so are held in low esteem by these so called upper castes! So, behind these practices lies a simmering cauldron of caste politics. In fact these castes like Koragas have been subjected to inhuman practices like what was called as Ajalu. They were served meals on leaves on which Brahmins have eaten along with a clipping of a nail or hair, dancing before the procession of deities etc.which have now been banned. These things were done ostensibly to transfer the ‘bad luck’ caused by some inauspicious combination of planets to these people!

The reactions to this practice of made snana were diametrically opposite. The Dalit activists who opposed it were manhandled by the very people indignities against whom were being protested-malekudiyas who belong to scheduled tribe, attacked the Dalit activist Shivaram who was submitting a memorandum against this practice to the administrator of the temple and police were silent spectators to this outrage. The volte face of the government on this issue of first banning the ritual and then permitting it left much to be desired. More strange were the attitudes of the ministers. Some of the Dalit ministers opposed the ritual while those like Dr.V.S.Acharya supported it! There are many strong reasons why the latter is supporting it. Firstly, it is a temple belonging to Shivalli Brahmins the community to which he belongs. Then again there is a strong Hindutwa lobby supporting these primitive barbaric rituals which he wanted to please. He also puts forward many theories to support his contentions which deserve to be analysed in detail as Dr.V.S.Acharya is an MBBS graduate who has been trained to and is expected to follow evidence based, scientific system of medicine.

So, if he justifies such a practice on medical grounds as he did he owes a lot of explanations to the scientific community which should be forthcoming. In any scientific system of medicine any practice associated with the process of diagnosis or treatment should be subjected to proper scrutiny before being followed. So, statements like practicing made snana may cause formation of antibodies, have to be justified with proper evidence. The long winded explanation for this is that saliva may contain some bacteria, viruses or some such which could stimulate the production of antibodies and boost the immune system of those who roll on the leaves which have been used. Hahnemann, the father of Homoeopathy has been also quoted here. Well, if something has to be accepted for treatment on the basis of scientific system of medicine it should be supported by evidence. 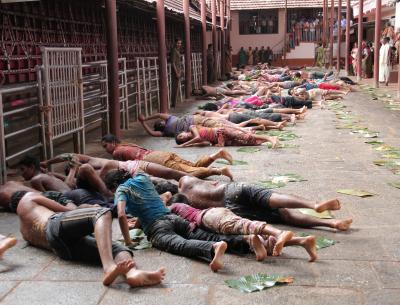 Again many other practices which have been now banned could have been given such justification like nude worship being needed to expose the skin to sunlight to get more vitamin D, child marriage helping to develop deeper bonds between the couples, widow burning being needed to protect them from misery, shaving their heads would protect them from lice etc. All these were well accepted practices at one time and have been now banned. If Dr.Acharya is a firm believer in this theory of antibodies being formed by this ritual he should start this practice himself and boost his own immune system too. Though one cannot agree with the arguments of those who oppose this – like it helps to spread diseases or transmits HIV virus, the practice has to be opposed if it is degrading a particular community that too one like the Malekudiyas who are a scheduled tribe. This system of performing the ritual on the leaves on which only one community have eaten is again violation of human rights of others who profess the same religion.

More to be condemned is the violence perpetrated on the activists who had gone to investigate the happenings. The perpetrators of this were honored as if they were heroes. These attempts to perpetuate the caste divide were supported by the victims themselves who allegedly threatened to stop their annual duty of decorating the temple chariot unless they were allowed to perform this degrading ritual of rolling over eaten leaves. This shows that either they must have been instigated or that their deep rooted superstitions must have scared them of the divine repercussions that would ensue if they ceased to perform this ritual.

It is a pity that even during these times where science has progressed to the level of identifying the micro organisms which cause leprosy that there are those who still believe that it is caused by the curse of a serpent and doing meaningless rituals like this can cure it. It is worse that there are ‘educated’ people in positions of power who keep trotting out excuses for these without a shred of evidence. For those who argue that it is for us to disprove such claims we quote – extraordinary claims need extraordinary evidence and that what can be asserted without evidence can be dismissed without evidence.