I was 7 years old in 1945. My father was a religious person and a very virtuous man. He was the Mines Manager at TISCO’s Doddakanya mines near Kadakola close to Mysore. He was falsely implicated in a case of theft of Rs 1000 /-. I used to hear him cry in front of my mother while I pretended to be asleep. He used to wonder why the Lord Rama & Shirdi Saibaba whose bhajans we used to sing so reverently every day, did not help him to absolve himself from the blame.

For me my father was honesty personified and when I saw that the gods & saints with godly powers did not help him, I was confused to say the least.

Somewhere along the line, over the next decade, a seed, a small seed of doubt crept in, and unlike most children of my age, I resolved to resolve it, so to speak. I pried it open and looked at it twelve ways and found that I couldn’t reconcile my doubt with my previous beliefs. This may sound condescending, but the practice of acquiring religion, through childhood indoctrination, actually dampens and suppresses the ability to think critically, but in some people it doesn’t always take. It didn’t for me, and thank goodness it didn’t for me. In a relatively short time, that seed of doubt grew into a cancerous growth in my brain (a good form of cancer) that continued until it had fully consumed all of the theistic molecules in my body.

With meteoric force, it shoved me, when I was about 17, into a blackhole of Atheism from which there was no escape.

I read books like “The Origin of Species” & “The Oscillating Universe” and realized that the very concept of god, much less god itself, was an irrational, nonsensical notion, based on contrived, yet ignorant explanations of nature, ones not worthy of belief, not worth basing one’s whole life around. 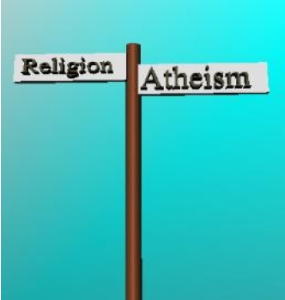 I became more and more convinced that god must have many psychological problems, even if we asssume that he exists. For one thing, he seems so insecure. He demands worship from everyone — praising him, pleading for money, requesting relief from illness. Why should an omnipotent, omniscient & omnibenevolent being need this flattery if he is omnipotent and solicitation for help if he is omniscient & omnibenevolent (He should know who needs what kind of help at which time, shouldn’t he?). Perhaps, I reasoned to myself, this makes him feel powerful, which shows his inferiority complex and insecurity. Secondly, he goes out and creates faulty humans and then blames them for his own mistakes. So even if hypothetically we assume that he exists, I felt that he doesn’t deserve my respect and adoration.

My parents were quite orthodox and religious but were quite pragmatic about it. They never coerced me to visit temples and do homas, yagnas and prayers. They only wanted their children to study well, do the best we could and leave the rest to God, as per the Gita. Once my mother said to me, ” why can’t you be like all the others? You think you know best? Mahatma Gandhi believes in God. You don’t. You think you are more intelligent than him?”

I had always thought of myself as an average person, with average intelligence, and certainly never felt that my intelligence surpassed that of others. My less-than-average academic grades was the proof of this. But even my average intelligence was telling me that we are alone in this universe and it was deluding ourselves to think that a God was concerned about human welfare.

So I ignored all the 2 crore gods in the Hindu pantheon and never visited the temples to trouble them with my petitions, and those gods also kept their respectful distance from me.

I found out through Comparative Religion that every religion thinks it is true. But I concluded that all 10,000 + currently alive religions cannot be true simultaneously, though they can all be false simultaneously. I discovered the difference between science and religion. When knowledge is inadequate, science poses a question, but religion proposes a belief.

I examined other religions and religious philosophies. Buddhism had great attraction for me. The life of the Buddha, and most of his precepts, seemed admirable and sensible in many ways. I began to study reincarnation, not just as presented by Buddhism, but in general. The fact that Buddhism stresses the ideal of becoming an integral part of the universe seemed to make sense. However, the asceticism of Buddhism, its complete rejection of the physical world (the only world we have) and the extent to which later Buddhism became formalized and corrupted bothered me. It surprised me somewhat to learn that Buddhists are essentially atheists – at least the idea of “God” does not play much of a role in Buddhist thought.

As I studied Evolutionary psychology and the history of science, I came to realize that all religions that I had studied were attempts to explain events and phenomena for which we have no natural explanation. Throughout mankind’s history, when we could not explain why something happened, it was because some deity or devil made it happen. God, angels and Evil spirits were simply the ancient substitute for the present-day function of scientific knowledge.

Why did the baby get sick? Why did the grass not grow for my sheep, goats & cattle? Why did the volcano erupt? Why did our enemies defeat us in battle? All these things occurred because we had displeased the gods. When good things happened – a miraculous recovery from illness, a victory, a good harvest – it was because for some reason the gods were pleased with us. Dreams, visions, hallucinations were interpreted as divine messages. All religions can be traced back ultimately to this need to explain the unknown and to control the vagaries of life. And religions survived because sometimes they appeared to work, and because we didn’t know any better.

We have since learned the natural explanations for many things that used to be attributed to the whims of a deity. Even those who still believe in God must admit that the best course in the case of illness is to get the doctor to prescribe the appropriate medicine, not to ask the priest-astrologer to determine the effects of Saturn & Rahu on us and to perform a ritual sacrifice to ward off those evil effects.

So it seemed to me that God was rapidly losing his job as an explanation for things we don’t understand.

In my Post-Retirement years :

If you’ve rejected traditional religion (or were never religious to start), you may be asking, “Is that all there is?” It’s liberating to recognize that supernatural beings are human creations … that there’s no such thing as “spirit” … that people are undesigned, unintended, and responsible for themselves.

But what’s next? That was the question bothering me throughout my adulthood.

For many people like me, mere atheism (the absence of belief in gods and the supernatural) or agnosticism (the view that such questions cannot be answered) aren’t enough. Atheism and agnosticism are silent on larger questions of values and meaning. If Meaning in life is not ordained from on high, what small-m meanings can we work out among ourselves?

So I asked myself, ” If eternal life is an illusion, how can we make the most of our only lives? As social beings sharing a godless world, how should we coexist?”

Religious people tell me that if there was no god, it would mean that this life had no meaning and purpose and they could not bear to live. I can understand that feeling, especially in view of the ‘ugliness’ evident in our world. Many people see life as a trial, as trudging from one problem to the next. The minute you have solved one problem, another crops up before you can say Sarveppalli Radhakrishnan. They need to believe that there is a reason for the misery and pain of existence. I can appreciate that. It might make suffering easier if you believe that you will be more than compensated for it, in an afterlife.

I would say life is meaningless, in the sense that one day, I will not exist as I do now. And of course, the Sun will eventually burn out and all life on Earth will vanish. But then who thinks that far in advance ? Who travels through life constantly worrying about the end of time ? Non-theists have the same kind of meaning in their lives as religious people. We, for some reason, don’t have a need for any greater meaning than is apparent. I see no evidence of a reason or purpose to existence. I only know that I exist, unlike god, and I must make the most of it.

I then came to the conclusion after extensively reading the works of Paul Kurtz, the Secular Humanist, that the purpose and meaning of life, is to make our lives purposeful & meaningful by cultivating the 3 C’s :

– Courage to face our life’s trials & tribulations without needing to suck on the pacifier of blind faith ,

– Cognition ( Critical reasoning and scientific temper to understand the origins of the Universe, life & consciousness), and

– Caring ( Compassion and tolerance for all humans & animals in the biosphere).

It is certainly not obtained by endlessly doing “Bhajans”, praising the glory of an imaginary sky-daddy. But I am not one who throws the baby out with the bath water. I realized that there are some redeeming features in Religion. Otherwise it wouldn’t have survived for thousands of years.

I will be the first person to acknowledge that the best benefit of religion is the spectacular art, sculptures and music it has produced. Examples of music :

– Then you have the Sufi music in Islam, and

In a moment of epiphany I realized that one doesn’t have to be a religious person to enjoy these kinds of enthralling music. There is melody and rhythm in this, which gives us auditory pleasure. Even infants, who are basically born atheists, enjoy music before getting indoctrinated into faith by parents. Many of these musicians were no doubt inspired by their ‘ Imaginary Gods’ to create this kind of music. But I felt that in the final analysis this music was man-made just like the God-concept was man-made. And as a humanist, though a secular one, I should respect the creation of human beings.

However, the biggest advantage to believing in god(s) — apart from the comforts of believing in everyday protection in this life, and immortality for self & Ultimate Justice for people who have deliberately hurt us, in the afterlife — is that you don’t have to unnecessarily tax your brain cells to learn & understand anything worthwhile about the origins of the Universe, life & humans — no physics, no biology, no geology, no paleontology, no anthropology, no evolutionary psychology, no neurotheology, no comparative religion, no nothing. Most of the religious people do not have any in-depth knowledge of these subjects and also have not cultivated the art of logical & critical reasoning and hence lull themselves into a sense of self-complacency thinking that their puerile religiosity is unquestionable.