Bihar School of Yoga situated at Monghyr ( now Munger ) in Bihar is a world class institution for training Hatayoga teachers & trainers. It so happens that Mysore is ranked at no.2 as a destination for all those foreigners who would like to learn something exotic and after going back to their respective countries, teach it to others for a fee. These people like to claim that they have learnt the science of Yoga straight from the horse’s mouth. At any point of time you will see 250 to 300 white-skinned people in Mysore who are here to learn the secrets of Hatayoga.

Yoga in my nuclear family

Prema, my wife, has been doing Pranayama for 15 years and she finds it useful in relaxing and overcoming anxiety. That’s ok by me. But when Prema said she would like to take up yoga asanas as a stand-alone exercise I became slightly panicky.

Prema (P) : There is a lady in the Women’s club who teaches Yoga to a lot of women. I would like to join that class.

Myself ( M) : Don’t do that for heaven’s sake. Walking is more useful than tying yourself up into knots like a pretzel and making constipated faces.

P : No, I will do Yogasans in the mornings and Walking in the evenings.

M : It invariably rains in the evening in Mysore and then you will say like all the people around here that you have done yoga, so it wouldn’t matter if you skip walking….. A lot of nervous energy is expended in doing those asanas. So you might not be left with any energy or motivation to do walking in the evenings.

P : But I am told that it is a complete exercise and that it prevents all diseases including cancer !

M : Since it was invented 5000 years ago in India, most of the gullible Indians have a conviction that old is gold and their sheer patriotism and loyalty to their ancestors like Patanjali makes then feel that it is a panacea.  Arousing the Kundalini shakthi  and the various chakras are all Bullsh * t.  Moreover Yoga asanas done as a stand-alone exercise can be dangerous too.

M :  When  we engage in any activity like lifting, pushing, punching, squeezing, dancing or moving like in walking or jogging, we contract our muscles. Say a muscle fibre is 5″ long ( It is much more long in the quadriceps, hamstrings or trapezius) . When we do exercise it contracts to, say 4.8″. When in the cooling down phase we do stretching, the muscle fibre comes back to 5″, the optimal size which keeps it healthy, elastic and live. So if we use Yoga for stretching just after aerobic walking or jogging or swimming or biking, it is ok. But remember that Yoga is not the only way to do this. There are Greek calisthenics, Tai chi chuan, and the stretching exercises taught by physiotherapists and sports medicine doctors, which is much more scientific than Yoga.

P : Why can’t Yoga be used as a stand-alone exercise ?

M : Let us again take the hypothetical example of the muscle fibre which is 5″ long. You have not done any aerobics. So it stays at 5”.  If now you engage in asanas, the fibre will elongate to 5.2″. Over a period of time, continued performance of stand-alone Yogasans will stretch the muscle fibre to  5.3″ or even 5.4″. There might be micro-tears in the fibre and the fibre loses its elasticity.  It is now unhealthy. It cannot perform tasks with the same efficiency, since the fibre cannot regain the healthy 5″ length. You will have less strength, less endurance though you will have the flexibility of an octopus. 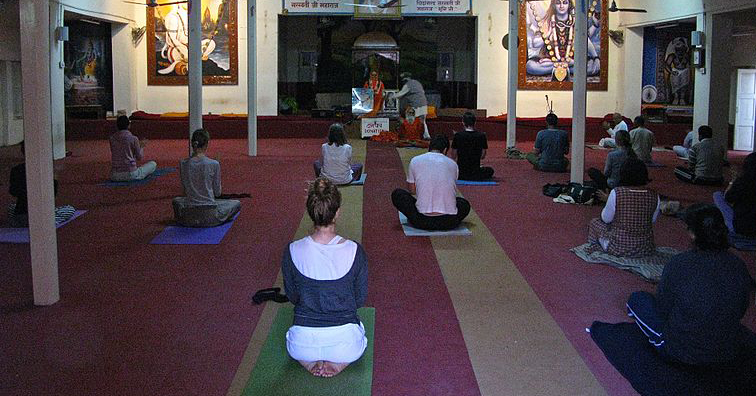 P : What about their claim that it can cure all diseases ?

M : Diseases can be prevented and even cured only through Cardio-vascular aerobic exercises like Jogging, Brisk Walking, swimming or biking and strength building exercises. This has been adequately proved in medical journals.

It improves the cardiac function and our VO2 max lung capacity by decreasing LDL cholesterol and Increasing HDL cholesterol,  by increasing Insulin-sensitivity. Remember that Type 2 adult onset diabetes is caused by Insulin-resistance and not by Insulin-deficiency. It also decreases our Blood pressure and body fat. But most importantly, aerobic exercise builds collateral circulation in our coronary arteries. Even if your main arteries are blocked 40 to 50%, you can still survive because aerobic exercise builds natural bypass capillaries to nourish the heart muscle beyond the narrowed artery.

When we improve the tone & strength of our upper body muscles, we automatically raise our BMR (Basal metabolic rate). This is because body fat in the sub-cutaneous adipose tissues or in the visceral region (Omentum fat) is a dead tissue whereas muscle is a live tissue with arteries, capillaries, veins in it and so even when you are idle you will be expending calories. So an increased BMR helps us to reduce our body fat even when we are sitting or sleeping.

When we exercise, the muscles contract, they pull the joints via the tendons. When the bones are under tensile stress like this, they react to that by creating more bone cells. This increases the BMD (bone mineral density) which strengthens the bones and prevents Osteoporosis and fractures on falling or injury.

In Yoga asanas, the cardio-vascular benefit is only about 10 % and strength building effect is only 10 % ( Unless you can do all those Herculean asanas which Baba Ramdev does on TV shows, in his camps, which only he can do, the megalomaniac exhibitionist that he is ! ) and the Stretching effect is 80%.  So while Yoga may benefit some sedentary people to some extent, since any activity is better than sleeping, it is hardly an ideal exercise and is dangerous as a stand-alone.

P : What about Pranayama ?

M : It is good in principle. It increases the VO2 max in our lungs, i.e., it maximises the oxygen uptake in our lungs. More of the haemoglobin molecules attached to our RBCs will be oxygenated. But the sad thing is, unless there is a rapid movement of the blood through our blood pipes, which are 1600 kms long ( arteries, arterioles, capillaries, veins & venules), this oxygenated blood cannot reach all the trillions of cells in our bodies. So pranayama by itself cannot give us a lot of benefit. Whereas if you do Jogging, brisk walking, swimming or biking you increase your blood pressure, heart rate and breathing rate and the oxygenated blood reaches most of the trillion cells in our body.

P :  When is Pranayama useful ?

M :  When you are anxious like when you are about to face an exam or interview or you are about to give a public lecture on a topic and you are not thoroughly prepared for clarifying the doubts of the audience, then perhaps a bit of Pranayama or doing other kinds of deep abdominal breathing might help to calm you down.

P : Are you saying that Yoga asanas & Pranayama are unscientific ?

M : Yes, unless you start at the age of 8-10 years. Then the muscles, tendons, ligaments and the spine become flexible and continued practice of Yoga thereafter can maintain this mobility of the joints and flexibility of the spine & muscles. But people take up Yoga at the age of 50 + when they suffer from Osteo-arthritis, Rheumatoid-arthritis, Lumbago, Bursitis or Spondylosis .

In such cases it may make people slightly more mobile after taking up Yoga than before, since any activity is better than no activity. But the Pranayama & Meditation aspects of Hata Yoga do give you stress relief and relaxes you.

However for youngsters, some of the Hata-Yoga asanas are iatrogenic, causing problems more than building health. When you sit down on the floor with one leg folded, the other stretched forward with knee locked and you try to touch your toes, you sprain your soas muscles in your lower back. This is unscientific. The knee should never be locked. There are many such useless postures in Yoga.

P : Then how come Americans, English and the Europeans have taken up Yoga for physical fitness ? Are they all fools ?

M : Mostly because of Evangelical Yoga teachers, the thrill of learning something exotic, because it is the in-thing or fashionable thing to do and it is being recommended by people in limelight like Hollywood actors. And these Yoga teachers are smiling. Smiling all the way to their bank accounts.

Yog asans or other forms of stretching are comparatively useless as warm ups or stand-alones, but somewhat okay as cool downs. The rest is all hype.