Editor’s Note: This is the fourth part of “Mind’s Matter”, a series by Dr. Jonathan Pararajasingham exploring the Neurobiological basis of behaviour.

Neuroscientists have discovered curious truths about religious experience and their potential enhancement through drugs, disease or even practice. In this article I explore the implications of the apparent malleability and non-universality of religiosity.

A relatively new area in neuroscience gaining momentum rapidly is neurotheology – a field which investigates the notion that within the brain are neural structures which give rise to the potential for religious experience. More studies are beginning to show not only that neural correlates exist, but that they have susceptibility to pharmacological and pathological modification and potentiation, much as the same as we have found for many of the complex emergent properties of the brain.

The neuroscientist VS Ramachandran has extensively investigated a curious condition known as temporal lobe epilepsy (TLE). Studies have shown that after TLE patients undergo an epileptic seizure, they uniquely describe having a profound “spiritual” experience. They claim to understand their place in the cosmos, and how everything suddenly becomes saturated with significance and meaning. Such experiences occur independently of prior beliefs held by the patient. Ramachandran has explained that the phenomenon is not evidence for “God module” as the media initially popularised. Rather that there are perhaps a variety of structures which work together to give rise to such spiritual experiences, which is the case with other specific systems of the brain. The visual system for example has many quite distinct components (colour, movement, object recognition, facial recognition) working together to produce vision, rather than a “vision module” located in a single area. TLE patients also show a reduced response to normally provocative images (such as sexual images), but a heightened response to religiously-loaded words or imagery. 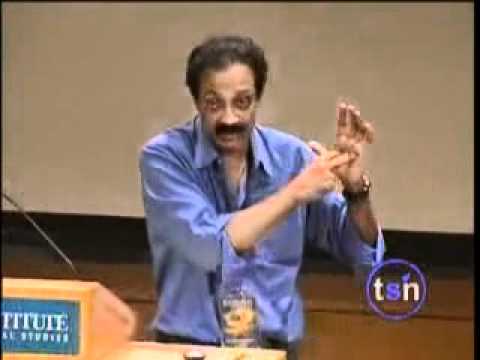 The serotonin (5-HT) system has long been of interest in biological models of human personality. Psychopharmacological research has investigated the effect of psychedelic drugs in relation to religious experience. The drugs which have been studied include adrenaline derivatives (e.g. mescaline) and serotonin derivatives (e.g. LSD, psilocybin, DMT). It has been found that these drugs cause transcendental or spiritual experiences as well as intense visual hallucinations. The remarkable finding is that all of these drugs act on one specific type of neuroreceptor called serotonin 2A (or 5-HT2A) receptors, which are found all over the cortical surface of the brain. 5-HT2A receptors are stimulatory, which means when these drugs acts on them they increase production of serotonin in the brain, and this gross overstimulation of the 5-HT2A receptors leads to what are interpreted as religious experiences.

A second line of evidence regarding the serotonin system was published in the American Journal of Psychiatry in 2003 on the effect of 5-HT1A receptors, which are inhibitory. They showed that the binding potential of 5-HT1A receptors correlated inversely with scores for “self-transcendence”. Self-transcendence is a personality trait covering religious behaviour and attitudes originally described by Washington University psychiatrist Robert Cloninger. He found that spiritual people tend to share a set of characteristics, such as feeling connected to the world and a willingness to accept things that cannot be objectively demonstrated. This result implies that there is a dysfunction in the 5-HT1A receptors in spiritual people resulting in less inhibition of the effects of serotonin, which in turn would lead to increased susceptibility to spiritual experiences. This was further evidence that the serotonin system may serve as a biological basis for spiritual experiences.

In “Why God Won’t Go Away”, radiologist Andrew Newberg describes his studies on the religious experiences of Tibetan Buddhists in meditation and Franciscan nuns in prayer. Using PET scanning, Newberg revealed a number of mental traits which all seem to play a part in an overall religious experience in the brain. The most interesting of these processes is the feeling of cosmic unity. The parietal lobe contains an area called the “orientation association area” (OAA), which processes information about space and time, as well as the orientation of the body in space. It determines where the body ends and the rest of the world begins. The left OAA creates the sensation of a physically delimited body. The right OAA creates the sense of the physical space in which the body exists. An injury here destroys your ability to navigate around in physical space.

Sensory input is essential for the OAA to function, which is blocked during intense meditation or prayer. The left OAA cannot find any boundary between self and non-self, resulting in a sense of oneness. Without sensory input, the right OAA defaults to a feeling of infinite space, where meditators feel that they have touched infinity.

The obvious interpretation of such findings is that there is neural architecture in the brain which includes the temporal lobes that are specialized for what we understand as spirituality, which may be selectively and transiently enhanced by pathological (epileptic storm) and artificial (5-HT2A agonists) factors. However, it is quite specific in these studies that what is described is an overwhelming feeling of meaning or significance. I would speculate that such religious experiences feed into our mind’s innate teleological sense, eventually culminating in a deep religious belief which is used to elucidate the experienced emotions. The focus therefore is in meaning – an idea which ties in elegantly with native teleology, explaining the obsession with meaning and purpose explanations among intellectual theists.

The most significant question that arises from these discoveries is the implications on the theistic account of free will in choosing faith. In other words, the typical monotheistic description of a God who gives us the ability (free will) to choose to worship him becomes problematic, since we find that the capacity for religious experience seems to be as varied among the population as any other personality trait, individual characteristic or innate ability. Some people are simply born with a brain that has a greater chance of finding God, as they are “wired up” that way. We are restricted in our choice, much the same as we are restricted in our choice to prefer chocolate or vanilla, Bach or Mozart, men or women. Neuroscientific studies have consistently shown that all the choices we make in life are far more greatly influenced by genetic makeup, rather than our environmental influences. In this regard, we are certainly not equal in finding pathways to God.

The potential of religiosity to be enhanced through drugs, disease or even practice, reminds one of similar effects on other abilities such as music or art. Certain brain conditions such as autism or schizophrenia lead patients to express heightened artistic or musical abilities. Perhaps we should think of deeply religous individuals as having a keen “religious ability”, much like we do with other types of artistic temperament.

But like art, such religious abilities may be rationalised now as being secondary to natural rather than divine processes, though I concede that those with strong religious abilities would be unlikely change their view that their stunning experiences have no supernatural component. Having said that, I would still hope for an intellectual purification of such feelings, perhaps first by discarding words such as spiritual, transcendent or religious in their description, as these have all been tarnished by the brush of supernaturalism. Instead, I would propose we begin to use phrases such as “numinous ability”. We can learn to appreciate this creative numinous ability as something intrinsically rather than mystically stunning, much the same as we appreciate music or art without linking their intrinsic beauty with supernaturalism.