Those who wonder what this title is about will learn more about it as we go on. When the Humanist conference at Oslo was over on the 16th of August, I left for London from there. My plans were to go from there to Edinburgh where a good friend of mine, Dr.Jacob Copeman, had invited me for some lectures at a few places. His idea was to also let me enjoy the cultural festival going on at the same time. But there was a small change in the plan. Vidutalai Regina a research worker at the University of Aarhus, Denmark had met me in Oslo and was very keen on arranging an interaction with the faculty of his university! So, before leaving for Edinburgh I had to go to Denmark. The interaction was a very good one, going on full swing until a call from the restaurant where we were to go to dinner disturbed our session! In Denmark they close pretty early and hence were were threatened with having to do without dinner unless we moved fast. So, we had to!

After that it was back to Edinburgh for a pleasant stay with Jacob whose Ph.D.thesis was about blood donation in India. He is very much interested in our movement too and is also planning to write a book about it. So it was on a Sunday that the two of us went to Glasgow to meet the Humanists there. The Glasgow chapter of the IHEU had arranged for an interaction with their members. It went on very well and there was also an Irish Humanist present. I asked him a question which is usually asked to us here- Are you a Roman Catholic Humanist, or a Protestant one? The audience burst into laughter! He said that was the tragedy in Ireland where even Humanists were divided along such lines! So, it is not unique to India, where we are labelled Hindu rationalists or Muslim rationalists! 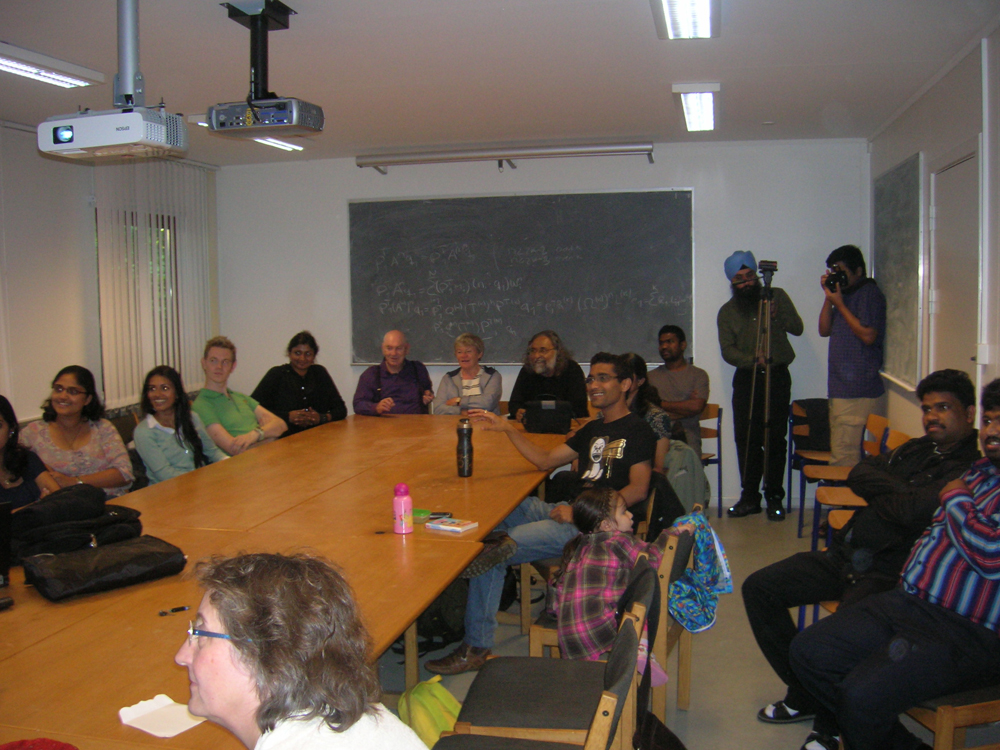 Academics at the University of Aarhus, Denmark

There were the usual questions about our superstitions, the role of the Godmen and such. After the interaction we returned to Edinburgh and went to a concert of the local orchestra which was a part of the ongoing Edinburgh cultural festival. On the next day was the interaction with the Edinburgh Humanists. The Humanists are a group of older people like us! But the Skeptics are younger. On the next day was a meet with the Glasgow Skeptics in the Pub! Yes, that is the name of the group that has a number of chapters all over UK. As their very name suggests we had to meet them at the pub! Before I met them I had some other engagements. I was in the radio station called Awaz run by the Asian community that interviewed me about our movement, the issues facing the country and my views on a variety of things. Next was a more-than-an-hour-long interview by Prof. Brown, a professor of History who is publishing a book on the atheists of India and wanted to include me in it. The meeting of the Skeptics at the pub was a tremendous success. We had to be evicted from the premises as we ran out of time. The response of the young crowd was excellent and I was also invited to their other chapters on my next visit.  I met one of their members at Birmingham later too and a meeting was sought to be organized at London, but could not come through because of the short notice. 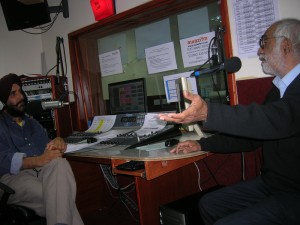 After the meetings in Scotland it was the turn of the Asian Rationalist Society, Britain to host me at Birmingham for their very important meeting to motivate people into pledging their bodies for organ donation. Its leaders, Sachdev Virdee and Bhagwanth Singh, are very dynamic persons. In fact they had hosted me on my last visit to England and they did so this time too. Virdee had in fact succeeded in prosecuting a so called godman who had promised many cures to people. In fact, it was he who had wanted me to boil eggs in Birmingham. He had previously told me that there was a Baba called the ‘egg baba’ who would pull out of boiled eggs slips of paper with people’s names written on them. Virdee had asked me to perform the same “miracle”. I had readily agreed to but got into trouble later. Anyway that deserves a separate mention!

On reaching Birmingham I was met by Bhagwanth Singh who took me to the office of the Asian Rationalist Society, Britain where we met Virdee. On the next day they organized a small meeting for the members of their association in which we had very casual interactions with some of their members. The Asian rationalist society Britain works very actively to promote rational thinking among the community and also educates them about the various benefits available to them. The organ donation campaign was a part of this activism. Cultivating scientific temper was one of the steps towards motivating people into pledging their organs for donation, and hence I had been invited for the same.

The issue of the ‘boiled egg Baba’ who had been exploiting the community by claiming to predict lottery winners from apparently intact boiled eggs. He would pull out the names of the family member in whose names the lottery tickets were to be purchased. I had agreed for the same as we had been doing this trick with raw eggs in India. In some parts of Eastern India there are tantriks who rub people’s stomachs with unopened raw eggs to ‘pull out’ evil spirits and other things administered through the food. They would then open the eggs and display the ‘extracted’ evil items like hair, pieces of roots etc. When we went to purchase eggs, I found myself in trouble because all chicken eggs in Britain are brown! I was prepared for white eggs and my experience was only with those. So, we had to hunt around quite a bit for them and finally we settled on duck eggs which were off-white in color and of a larger size.

So, we were ready to expose the so called ‘miracle’ of the boiled egg Baba who was said to have earned more than a million pounds using this trick. On the 27th day of August, a Saturday, we had a meeting on organ donation by the Birmingham branch of the Asian Rationalist Society. It was a well attended meeting (by Western standards) with more than two hundred people. As per the usual custom there were poems sung by their bards, welcome addresses and all the formalities. There was a Punjabi psychiatrist who explained to them the need for proper treatment of mental illness, and on why it was very much needed for the community to be united and members to help each other since tissue compatibility is greater among people hailing for the same ethnic groups. Then it was the time for our demonstration of the so-called miracles and showing video footage of the tricks of the Indian godmen. This was received very well by the audience who had a number of questions. 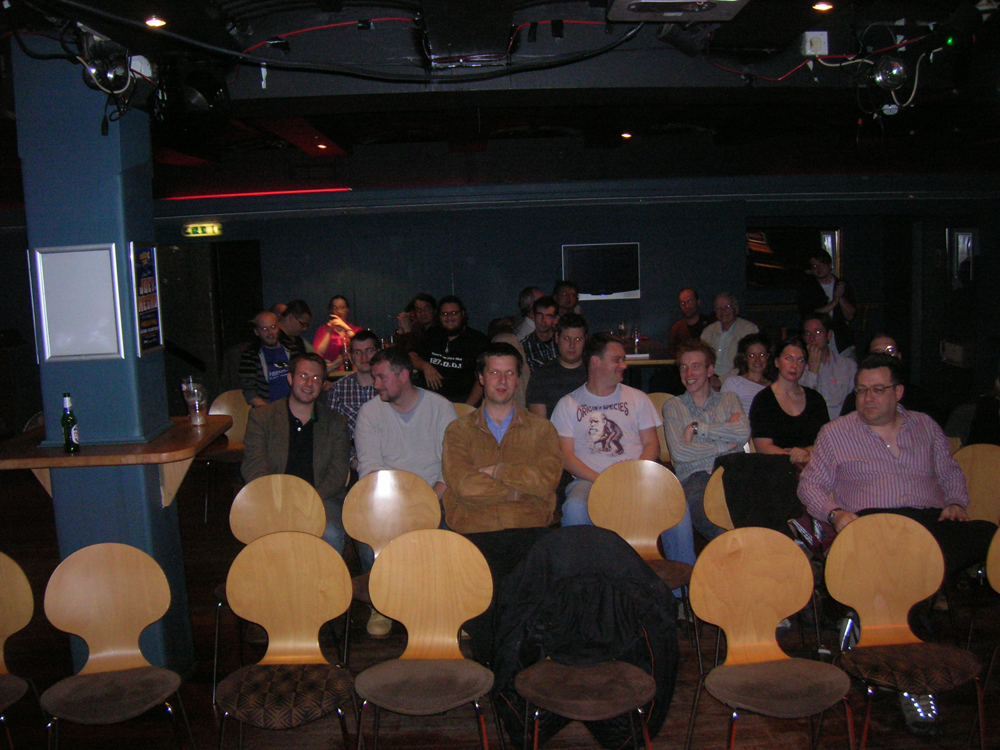 Glasgow Skeptics in the Pub. Those in the front row have gone for refills!

Suddenly the ‘boiled eggs’ cropped up. We showed them intact eggs that were broken open in the presence of some of the members of the audience. We pulled out names of people from the inside of the eggs on which were written the names of Babu Gogineni who was one of the speakers, Bhagwanth Singh, Sachdev Virdee and some others. So, it was a veritable exposure of the ‘boiled egg Baba’! The audience were shocked when it was explained how easy it is to perform this trick. It is just a matter of carefully snipping off a part of the shell of the boiled eggs, inserting the slips into them and resealing them with a color matched adhesive cement.

This was not the first superstition that the Birmingham Indians were prey to. In fact, the last time I had been there one Punjabi gentleman had met me with a very serious problem. He had confided to me that back home in Jalandhar some enemy of his was doing black magic to him and one of his friends had arranged a tantrik who was doing the rituals to ward them off! He told me that to date he had sent him various sums of money which would total up to about 6,000 pounds. Now, he said, there was a demand to send a lump sum of 3,000 pounds for a more elaborate ritual. He asked my advice on whether it would work! Imagine a sum of nearly a million rupees to stop the effects of black magic from a place thousands of miles away! 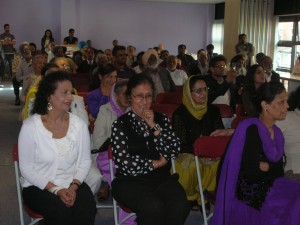 Later on it was time for the Rationalists in the Pub meeting with the members of the executive committee of the ARSB. It was not the first such meeting- in fact, almost every day ended with the meeting of the members in a pub nearby! The younger group of skeptics at the pub would be meeting once a month while the office bearers of the ARSB conduct most of the executive committee meetings in the salubrious environs of a pub near their office where they are regular customers even otherwise. One of the members of the Birmingham chapter of skeptics in the pub, Patrick, had come to this meeting and had recorded an interview which would be podcast on their website later.

After having come so near to the Mecca of reason, it would have been a sacrilege if we were not to perform the rationalist Haj. Close to Birmingham is Shrewsbury, the birth place of Charles Darwin, the man who struck the biggest blow to the religious views of the origin of life on the earth by proposing the theory of evolution. On the way to this place is the area where the Industrial revolution is said to have started. Anyway, the Haj of rationalism deserves a separate story which will be penned when there is time!