Nirmukta, which was started as a website and online community, has given those of us in Chennai a platform to meet and interact with people who share our world view. We have been meeting every month for almost a year now. We finally decided to bring in experts on Science and Secularism to talk to the general public. Yukti organized by Bengaluru Freethinkers was an inspiration for this meet.

The result was Thinkfest 2011, an event organized by the Chennai Freethiners on the 1st and 2nd of October.

Day 1 was an in-house programme. The morning was spent in an Institution for Children with Special needs. The group interacted with the children who cheerfully sang, danced and played games.

In the afternoon there were mentoring sessions with Prof. Narendra Nayak and Mr.Babu Gogineni . Prof. Nayak shared his experiences in spreading Rationality traveling the length and breadth of the country, and the problems faced by him.

Mr. Babu explained what Humanism was all about. He also gave valuable suggestions on how to make presentations in the media.

A ‘Symposium on Science and Secularism’ was organized on October 2nd 2011. Dr.Ganesh gave a detailed introduction about Nirmukta and its objectives and how each topic chosen by the speakers was relevant to the present scenario. 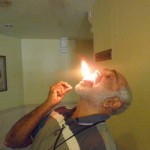 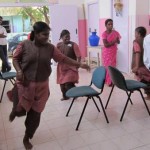 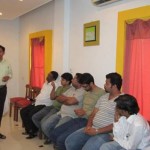 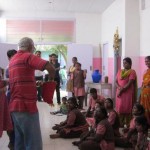 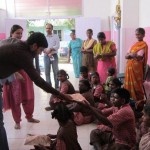 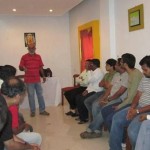 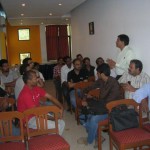 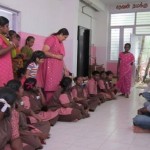 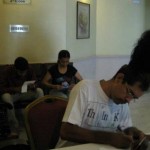 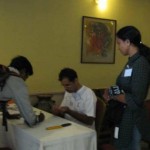 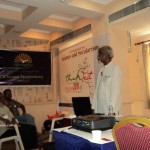 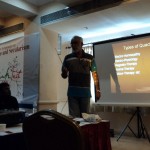 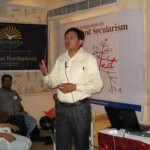 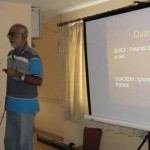 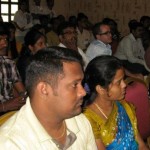 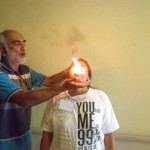 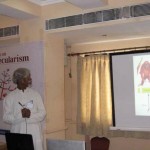 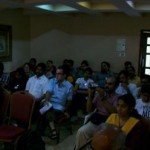 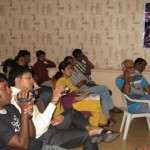 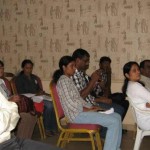 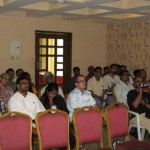 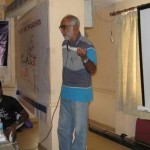 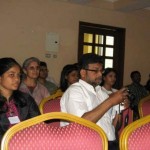 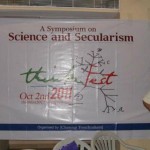 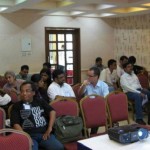 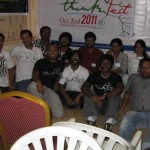 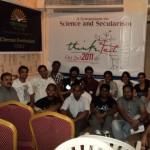 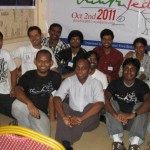 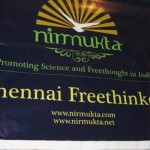 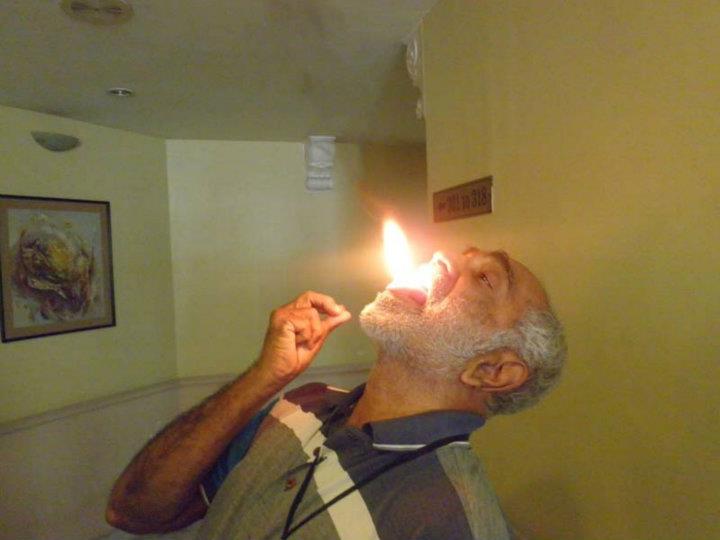 Interacting with school children on Day 1

Mr. Gogineni talking to the group on Day 1

Prof. Nayak interacting with the group on Day 1.

Audience engrossed in the lecture, Day 2

Chennai Freethinkers group, after the event

The Chennai group after the event

Another picture after the event

One of the event banners, featuring the Nirmukta logo

Prof. Dayanandan’s talk was on ‘Chimpanzee is our cousin; so is the neem tree.’ He weaved magic with his words and portrayed beautifully the rich tapestry of interrelationship between all life forms on earth.

The audience listened in fascination when he explained how mitochondria, the energy factory in animal cells, had evolved from bacteria; how variation in skin colour in human beings had evolved as recently as 60000 years ago. He took us to the 19th century – bringing before our eyes young Darwin embarking eagerly on his voyage, visiting the Galapagos islands, collecting specimens while travelling for five years, and upon returning, carefully collating and analyzing before publishing his seminal book ‘On the Origin of Species.’ He made us marvel at the fact that Darwin arrived at his theory without any knowledge of genes.

Then he took us farther back in time to Africa where Homo sapiens evolved and then spread to other continents. He vividly painted the picture of our ancestors trudging ‘Out of Africa.’ He explained what the ‘evolutionary bottleneck’ was and how the entire world population had probably descended from a small group of about 5000 individuals. He also showed some stone tools that were fashioned by our ancestors who lived thousands of years ago around modern Chennai. It was a comprehensive and engaging session that sparked of academic brilliance yet couched in simple terms for all to understand with ease. The meticulously prepared slides and the arresting photographs of nature kept the audience engrossed.

Later there was an interactive session in which the audience came up with interesting questions and the session ended with the audience wanting to hear more lectures from Prof. Dayanandan.

The next talk was by Prof. Narendra Nayak on the topic of Alternative Medicine. He explained the various ‘alternatives’ available including homeopathy, crystal therapy, gem therapy, and so on, and explained how they were all different types of quackery; he showed videos of conmen nonchalantly explaining to gullible people how their treatments ‘work’.

The first session after Lunch was by Mr. Babu Gogineni.  He explained what Humanism means and who could be called a humanist. While Atheism is ‘just a conclusion’ and Rationalism is ‘an approach’ Humanism is a life stance and a philosophy he said.

He suggested that freethinkers should take up causes and explain their stand to the public. For example, he said we can support women who want to visit the Sabarimala temple in Kerala which by tradition does not allow women to enter. This led to an agitated discussion in which many members of the audience expressed their disagreement saying that we should not support visiting temples when we ourselves do not believe in the existence of god. Mr. Babu replied that Humanism is supporting one’s right to have a religion or not have a religion, and when there is a fundamental inequality it is our duty to address it. Morevoer, this step would shake the foundation of religion and weaken it ultimately. It is a healthy sign that the debate generated that day was continued by the members in Facebook. Can giving aid to welfare institutions affiliated to a particular religion or fighting for equality within religion be considered as ‘pre-competitive’? Mr. Babu’s talk was, to describe in one word, poetic.

The last session of the day was ‘Science behind Miracles’ by Prof. Nayak. He demonstrated with utter ease several miracles attributed to the divine power – be it ‘materializing’ holy ash or gold chain or currency; he showed the trick of placing burning camphor on tongue.

Then he showed videos of Sai Baba poorly performing cheap tricks which were caught beyond doubt by the camera. The audience were surprised by the cognitive dissonance of several educated people who fell for such tricksters. Due to lack of time Prof. Nayak could not demonstrate all the debunking in his repertoire.

Mr. Bala Bhaskar proposed the Vote of Thanks and the day ended with the audience wanting more such programmes and the speakers expressing happiness to have such a knowledgeable and interested audience. It was a great experience organizing a refreshing event as this. And so we dare to hope….maybe  Chennai Freethinkers would in the near future begin to conduct an annual event with lectures on Science and Secularism, something on the lines of the Christmas Lectures ; organize debates between famous theists and atheists; reach out to school students regularly to teach them what skeptical thinking means; conduct summer camps like the Camp Quest  and so on.

Meanwhile it is time for us to concentrate on community building – we recognize that we are not a homogenous group (far from it, infact!)  and so think of ways to reach out to each other. We are planning a visit to the Crocodile Bank, a Turtle walk on a moonlit night in the beaches of Besant Nagar,  a Tree walk with Nizhal to learn to recognize the various species of trees thriving in the concrete jungle of Chennai, prepare science videos in Tamil and distribute it to schools in rural areas to spread science and rationalism. Thus we have set out on our long voyage to Ithaka – a journey full of adventure, full of discovery, our thoughts raised high and a rare excitement stirring our spirit and our body. May we enjoy the journey to the hilt!