Editor’s Note: This is the first part of “Mind’s Matter”, a new series of articles by Dr. Jonathan Pararajasingham, exploring the Neurobiological basis of behaviour.

“We serial killers are your sons, we are your husbands, we are everywhere.” – Ted Bundy

One of the most controversial areas of research in neuroscience involves the search for biophysical causes of sadistic thought and behaviour. But there now seems to be enough complementary evidence to at least begin piecing together a coherent materialistic description of the psychopathic mind. A number of potential genetic and pathophysiological causes of violence and aggression have been investigated over recent years. These include things like the monoamine oxidase A gene, head trauma, serotonin deficiency, epilepsy, stress, and neuropeptides. But since the recent surge in quality of neuroimaging techniques, we are now finding exceptionally detailed anatomical correlates to certain types of behaviour, including antisocialism and criminality. Research now points to the discovery that impulsive aggression and violence arise as a consequence of faulty emotion regulation circuitry in the brain. In this paper I aim to outline the evidence and implications of this finding. 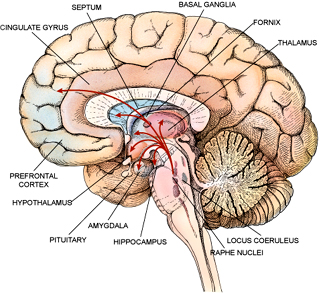 During its evolution, the human brain has acquired three components that progressively appeared and became superimposed, laid down one on top of the other. The most primitive component is the Archipallium (primitive “reptilian” brain), which corresponds to the reptile brain, which comprises the brainstem (controls breathing and circulation), cerebellum, basal ganglia and olfactory bulbs (smell). The second component to develop was the Paleopallium (intermediate “old mammalian” brain), comprising the structures of the limbic system (produces emotion and motivation). This corresponds to the brain of the inferior mammals. The final component to develop was the Neopallium (superior “new mammalian” brain), which essentially comprises the entire cortex (higher function grey matter), and corresponds to the brain of the superior mammals, thus including the primates.

So the limbic system, among other functions, is effectively the emotional core of brain, with various integral parts including the amygdala (emotional response), anterior cingulate cortex (emotion formation/processing), orbitofrontal cortex (decision making) and hypothalamus (sex, hunger, thirst). It is these neuroanatomical components that I will now outline in more detail, and how their independent dysfunctions can result in callous, antisocial proclivities.

As we acquire experiences, we gather not just memories but also assign emotional responses to them depending on how they made us feel. When the same experiences are encountered, they come in through the sense centres (visual, auditory, etc.), and travel to the hippocampus (memory storage centre) and with the help of the surrounding temporal cortex, a match is located. Subsequently these memories are processed in the limbic system via the amygdala, to decide on what the emotional response should be based on past experience. It is therefore unsurprising that dysfunction of the hippocampus and temporal cortex are also implicated in violent traits. Imaging studies have found either reduced volume or blood flow or structural asymmetry in the hippocampus in violent criminals (Soderstrom, 2000) and psychopaths (Laakso, 2001). Additionally, reduced temporal lobe volume has been reported in both incarcerated psychopaths (Dolan 2002) and in APDs (Barkataki 2006). Using imaging techniques such as SPECT and fMRI, studies have shown significant negative correlations between psychopathy and temporal perfusion (Soderstrom 2002).

This almond-shaped structure acts as the gateway from the hippocampus (memory centre) to the limbic system and thus our emotions. It is vital for emotional learning, aversive conditioning, recognition of emotional facial expressions, and regulating the response to emotional memory such as pleasure and fear (DeLisi 2009). Given the outline described for processing emotional experiences, it makes sense that we find unemotional traits are linked to disorders of the amygdala. Smaller or dysfunctional amygdalae are found in violent criminals, resulting in their lack of recognition of fear in victims, and disallowing normal processing of their own emotional responses.

Once the amygdala has processed the memory experience, and an appropriate emotional response is decided upon, the idea travels to higher centres in the brain to “decide” on whether this action is indeed appropriate. The first encountered structure that is important in this process is the cingulate cortex (CC). Several fMRI studies have shown reduced activation in the CC (anterior and posterior) in criminal psychopaths (Kiehl 2001).

The prefrontal cortex (PFC) is essentially responsible for higher cognitive function. These include forward planning, prediction of outcomes, expectation processing and social control. One part of the PFC, the orbitofrontal cortex, is crucially involved in decision-making, and is therefore the important in making a final decision on how to appropriate a response to emotional stimuli. Patients with orbitofrontal lesions are typically disinhibited, impulsive and unconcerned with the consequences of their behaviour (Brower and Price 2001). Reduced metabolism of another part of the PFC (dorsolateral PFC) has been found in patients with both antisocial and aggression disorder, including aggressive epileptic children (Juhasz 2001).

Comparing studies on moral judgement and antisocialism, it has recently been suggested that the brain areas associated with both moral reasoning and antisocial behaviour significantly overlap (Raine 2006). There is strong evidence to suggest that the angular gyrus and prefrontal cortex in particular seem to be involved not only in antisocial behaviour, but also in moral cognition. Impairments therefore to such areas disrupt not only the correct social responses to emotions, but also the way in which moral choices are deliberated. The main study in this area (Greene et al., 2001) suggested that these structures play a central role in the emotional processes that influence personal moral decision-making.

In normal brain anatomy, a midline vertical sheet-like membrane called the septum pellucidum is present, and forms a divide between the main fluid cavities of the brain (lateral ventricles). However, during early brain development in the foetus, this membrane forms as two layers which then fuse. Prior to this fusion, there is a cavity called the cavum septum pellucidum (CSP). In 15% of the population these layers fail to fuse, resulting in persistence of the CSP in the adult brain.

The septum pellucidum is linked to feelings of pleasure, sexual pleasure and anger. Lesions of the septum have been shown to lead to rage, and electrical stimulation to distort its output signals can subsequently restore normal behaviour. A recent study (Raine 2010) demonstrated that those with CSP had significantly higher levels of antisocial personality, psychopathy and convictions compared to those without.

The latest neuroscientific research is beginning to force us to re-evaluate issues of morality and culpability. While the “my brain made me do it” defence might seem ludicrous, we must remember that the legal system does, and has for a long time, recognised the relevance of psychiatric conditions on culpability, where punishments are reduced based on such diagnoses. And alongside neuroscience, a further line of research in genetics is identifying the genes which give rise to antisocial and aggressive behaviour, and of course the blueprint for brain development is contained within these very genes. The way the rest of us develop moral rationality is utterly dependent on a functioning brain. But if in a criminal we find key components of their brain are damaged subtly enough for them to function otherwise normally, we will find it difficult not to assign culpability. As we hone in on the precise nature of these abnormalities, medical and surgical treatments could possibly be developed to treat these socio-psychiatric conditions. While this neuroethical theory of psychopathic behaviour must be regarded as provisional, the line of the law should be drawn with it in mind; and we may have to shift its current position very soon.

Raine, A. “Neurodevelopmental marker for limbic maldevelopment in antisocial personality disorder and psychopathy”, The British Journal of Psychiatry (2010) 197: 186-192

For discussion of the entire series Mind’s Matter, visit this thread on the forums.