This is not a report of the Humanist Congress at Oslo but just my experiences and my impressions of my stay there. When Babu Gogineni, the International Director of International Humanist and Ethical Union (IHEU) invited me to attend the world congress at Oslo, I was a bit hesitant. It required my absence from the country for a while and some work regarding the arrangements. But, there was the added incentive of conducting some activities in England and Scotland that made me agree to it. I also contacted the members of the Asian Rationalist Society, Britain who have been inviting me there for many years since my last visit there in 2005. Dr.Jacob Copeman, a lecturer at The University of Edinburgh had spent quite some time with me in India and was keen to take me to Scotland for interactions there.

So, I decided to attend the IHEU Congress and along with that do a tour of the UK. The Norway conference was organized by the Norwegian Humanist Society which has around 80,000 members and is growing. There Humanism is recognized as a life stance and they get the same government grants that religious institutions receive. They have their own ceremonies for confirmation, marriage, Christening and funerals, without the invocation of any supernatural power. They also have a nice building housing their headquarters in Oslo. After the registration I was given the choice of staying at a hotel or with one of their members. I chose the latter because I wanted to know their culture and views. I was very lucky to be the guest of Knut who works for the income tax office. He was an excellent host and a thorough gentleman. Long before my date of arrival at Oslo he had mailed me the detailed instructions for regarding the stay! Anyway when I arrived in Oslo I was met by Vidu and his Srilankan friend Suresh, who picked me up from the airport and dropped me at his house. Though Vidu is from Aarhus in Denmark, he had come to Oslo just to meet me and also persuade me to have an interaction at his university. Anyway that is another story which we shall see later.

At Oslo the Norwegian Humanists had plans to keep us busy for a week. On the first two days we had a leadership training program for the activists of the movement. It was a two day affair held at their headquarters. We had very useful discussions about the various aspects of the movement and also had the opportunity to share our experiences with the younger set. After this was the three day meeting at the convention center which was very close to the place where the recent terrorist bomb blast had taken place. On the first day was the plenary followed by a number of parallel sessions on the various aspects of humanism, including a lecture on evolution by the noted evolutionary biologist P.Z.Myers. I had the opportunity to meet a number of humanists from many countries as there were delegates from about thirty countries from all corners of the world, though the demographics were tilted towards those from the developed world, and that too Western Europe and the UK.

That we Humanists are a very tolerant lot can be seen from the following incident.

There was a group of Islamic fundamentalists from England that had put up a stall just outside the venue of our conference and were distributing booklets to our delegates about the existence of God, talking about how the Koran was a book directly revealed to Mohammad by Allah, etc. Some of our delegates had discussions with them. On the second day, one of the delegates from Pakistan came running to me in a state of excitement and told me that one of their people had entered the venue with his booklets and was distributing them. He requested me, asking me to please handle him. I just went over to the man, welcomed him and told him that he was welcome to our world congress where there were so many delegates from all over the world. I also requested him to make arrangements for us to go to their world congregation at Mecca where we could be allowed to distribute our literature. He said that was not in his control. But, I told him that he could at least be our guest and have lunch with us and offered him what I was eating; this must have hit him hard. Firstly, it was Ramadan time, and secondly, unknowingly I had offered him bacon! He said he was not a delegate and hence not eligible to eat there but I reassured him that he was my guest! However, by that time the security people had moved in and they evicted him from the premises. 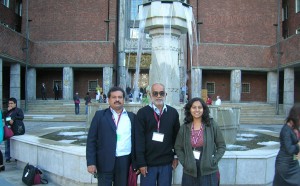 Later on, I realized why our Pakistani fellow humanist was so excited. He was from Peshawar, a communist, and had been jailed for 5 years for blasphemy. No wonder he was so bitter about Islam!

My stay at Knut’s residence was made pleasant by him, He took great the pains to see to it that I was comfortable. I also understood why he was very keen to have someone from India staying with him. He had a girlfriend from India, and was inquiring about how relationships between two people of the opposite sex are seen in our country if they are not married. I told him that live-in relationships are not uncommon now and even the Supreme court of India has recognized them. Staying with him I also had the opportunity to meet Robert Priddy, an ex devotee of the late Satya Narayana Raju- the thug of Puttaparthi. He narrated to me various instances of Sai Baba’s so called miracles, how he became disillusioned with him and quit the movement. He showed me the ring that was allegedly ’materialized’ by this man and also discussed plans to expose this man by a person who was exploited sexually by him. These plans are however at a very embryonic stage and hence cannot be disclosed. He also narrated the difficulties he had encountered in opening a Sai chapter in Norway back when he was a devotee. It needed just twenty people to do that and he could not find that many in number in the whole of Norway ready to join the Sai movement. That says a lot about the claims made by the organization about having branches in dozens of countries etc! No one is to ready to follow their dictates of being vegetarian, singing bhajans, joining satsangs etc!

On the second day of the conference, the delegates were invited by the Mayor of Oslo to a reception at the Town Hall. It was the same hall where Nobel prizes are awarded each year. It was a pleasure to be in this place and to attend the reception. The refreshments served at Oslo would have caused a furore if done in India or any Islamic country. There was sparkling white wine and other refreshments that would have hit the headlines here and caused public protests. This shows us the difference between the various cultures and what is considered as the right thing to do. There was another problem here- the dress was said to be formal. I had left my tie and blazer at the home of host and thought of going back to wear them. But, I was assured by the Norwegians that in their country formal dress meant no half pants, sandals and T shirts! It did not mean the ‘formal attire’ of the British which was a dark suit with tie etc. The Town hall was painted with murals and was a lovely place. The same evening my host Knut and I took a ferry to the Oslo fjiord where we could see the sun at 9.30pm. It is not for nothing that Norway is called as the land of the midnight sun. 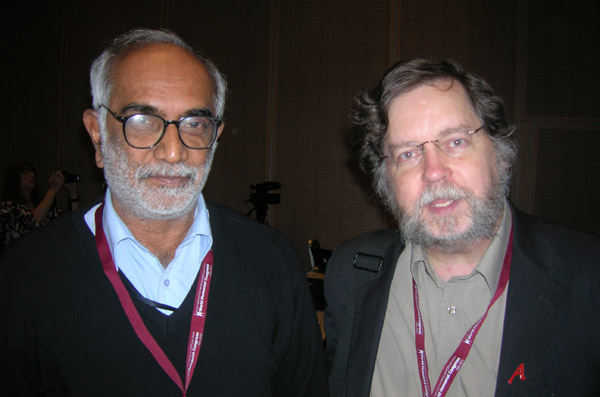 On the next day after the technical sessions it was time for a banquet at the Oslo opera house which was a wonderful place. There I had the surprise of my life. Just before the banquet was to start I was told by Babu Gogineni that I was to receive the award for distinguished service to humanism. This time there were three selected and two of us, V.B.Rawat and I, were from India. He was selected for his work among 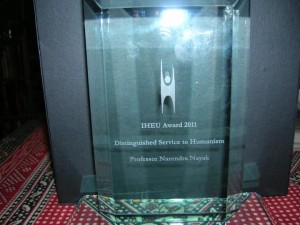 the landless people of North India and I for my work in carrying the message of humanism to various parts of the country. The award was presented by Sonja Eggericx, the President of the International Humanist and Ethical Union. There was a round of applause and I was congratulated by the Humanists from all over the world.

After the World Humanist Congress was over, there was one more workshop for young people on developing humanism. In this workshop I was to present a paper on the techniques used in our country to develop humanism. During this presentation I had an interaction with video clippings and demonstrations of the so called miracles that we have been using as tools to develop scientific temper among the people in our country. One thing was very clear from our interaction with  the Norwegian Humanists- religion was almost dead in their country. No one bothered about God, Heaven, Hell or any religious ceremonies. Though there was a king, he was as democratic as anyone else. In fact one of the sessions was addressed by the Crown Prince of Norway who had just walked in without much fanfare and had walked away too without much of it! However, there was a tinge of sadness over the loss of lives in the senseless murders that had occurred a few days before. More than eighty young people had been shot dead by a religious right winger who had also set off a bomb blast- probably for the first time in the history of what is known to be one of the most peaceful nations on the earth.