I have been interested in writing articles introducing the great American psychologist B.F.Skinner to Indian audiences for about thirty years now. Let’s plunge right into this introduction about the great man and his works — the story of how I got introduced to Skinner’s work can wait.

Why should anybody bother learning about Skinner? What is in it for them? Let me attempt to answer this via my friend Dave Palmer’s Website http://www.science.smith.edu/departments/PSYCH/dpalmer/biography.htm

Dave is the best exponent of Skinner’s views today. The following is a quote from the above Website:

I’m not trying to be pretentious, but these dead white males have changed my life:

•          William Shakespeare, for those beautiful lines, and for Falstaff.

Dave can keep his Thoreau and Bill Shakespeare [] which leaves Skinner in the company of none less than Newton and Darwin – that is how profound a thinker B.F.Skinner was — the “B.F.Skinner figured out everything else” is not much of an exaggeration.

Darwin figured out how new species are formed – his explanation was that this happened via mutation and natural selection. Skinner figured out how we learn new behaviors – his explanation was that this also happened via a similar selection process. We will leave the details for a future time – after all this is an introductory piece. For those who cannot wait, here is a list of books:

Theism assumes that there is an omnipotent, omnipresent, omniscient, and kind entity, that has created us and that watches over us. Readers of this 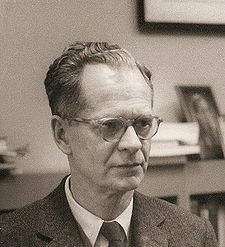 site know that this is a myth. (What a relief that I can assume this and get past this part of the argument quickly.) Traditional psychology assumes that there is a non-physical entity that resides inside us that is responsible for our thoughts and actions – this entity is called our mind/soul/spirit and the like. Some people can let go of this, only to replace it with a computer inside us that they talk about using the analogy of artificial intelligence. This mental entity inside us has been called a ‘homunculus’. Skinner pointed out that such an inner non-physical entity is also a myth, a claim that even atheists have problems with. This is the next hurdle for a scientifically minded person to climb. Skinner calls all actions behavior/responses; this includes spoken/written/keyboarded words and private utterances/privately seen images/privately heard sounds (all of which are physical by the way). Skinner’s point is that it is the whole body that “causes” these actions. How does this happen?

•          Some actions are of genetic origin (called phylogenic origin)

•          During our lifetime, we “emit” various responses. (We will consider the problem of the first response at a future date. These are like mutations.)

•          Some responses have consequences. These may well be coincidental. Some of the consequences have a reinforcing effect on the preceding responses. (This is like natural selection.)

Like it or not, this is the Skinnerian view. Skinner’s “mutation” and “selection” extends to even how language behavior is learnt and occurs. This view was presented in a landmark book called Verbal Behavior. I have no doubt that this book will have an importance compared to Darwin’s The Origin of Species.

Let me end on a lighter note. (There is no shortage of lighter stuff with Skinner.) Skinner’s undergraduate education was in English – he was preparing for a career in writing. After graduation, he took a year off to write. This attempt did not go well. The books he read during this time steered him towards the approach he later took in psychology (namely eschewing (a) mental processes, (b) the seeking of causes inside the individual, and (c) the homunculus). It is to the great credit of American high school and liberal arts education that he had enough confidence to take on the best of physical scientists throughout his career. Skinner was close friends with a Nobel Prize winning physicist called Percy Bridgman. Percy was older than Skinner but in their intellectual association, Skinner was the senior partner.

Skinner called his year spent attempting to write his dark year. Towards the end of that year, having given up writing, he got a job as a landscape gardener. A truck would come and pick him up every day and drop him off after the day’s work. Skinner boss liked his work so much that he even got a $0.50 raise. Fortunately, Skinner was allergic to some of the plants – otherwise, the world would have been deprived of his work. Giving up the landscape laborer’s work, Skinner went to Harvard to study psychology, already having an approach in mind. (It is OK for behaviorists like me to use words like “mind” in casual conversation. This is like an astronomer saying to a colleague ‘Let’s start collecting data at sunset’.) He had very little help from his department and in fact faced some hostility. His thesis advisor – a man called Edwin Boring — felt very nervous about the claims that Skinner was making and resigned from the thesis committee about a week before Skinner’s PhD defense. Skinner found people at the medical school who stepped in and approved Skinner’s thesis. About twenty years later, Boring wrote a book of biographies of psychologists in which he called Skinner’s thesis ‘truly a thesis’.

The landscape gardener story reminds me of an Enrico Fermi story, Fermi being an equally colorful character. During a visit to the US, Fermi bought or rented a second hand car and traveled around the country in it. (At that time, he had already completed the radioactivity work that would later fetch him a Nobel Prize. Some of the work was later found to be wrong – after the discovery of the fission process – but it was still forward progress.) The car broke down at some place. A nearby service station was open but they didn’t have a mechanic available. Fermi talked the owner into letting him (Fermi) fix the car. The owner was so impressed with Fermi’s work that he offered him the job of a mechanic on the spot!