I am not a ‘great leader’ in the anti-corruption movement, and if I do skip meals it is because of pressing engagements; I have been an active worker in two movements that are closest to my heart – the consumer rights movement and the rationalist movement, not necessarily in that order.

The order of priority has changed at different times in my public life spanning three decades. However much I try to keep them separate, I do sometimes carry the baggage of one into the other! Like the other day when I told the man who came to me with a complaint about adulterated ghee being sold for burning in lamps before idols in temples -“What difference does it make? Anyway you are burning it!” That was an off the cuff remark and I apologised for it. We then did take up the issue and the sample turned out to be adulterated! When people ask me about my achievements in life I say that I can boast of two things – I have not spent a paisa on religious ceremonies or bribes so far in my life!

Of course it is a qualified statement – so far in my life – but it is probably too late to start doing these things now. Sometimes it is very difficult to keep up. For example when we took my mother’s body for cremation the attendant of the crematorium asked me for fifty rupees. I asked him for a receipt for the amount and he gave me one for five rupees. I told him that it was all I would pay. Then he replied that it was a low-paying job and he had to collect bribes to survive. I replied that if that was so he should quit. He asked me whether I would give him a job if he quit. I told him giving him a job was not my business and I would pay only the prescribed fee and not a rupee more. All this with my mother’s body lying there- an occasion for grief when one would not mind paying anything. 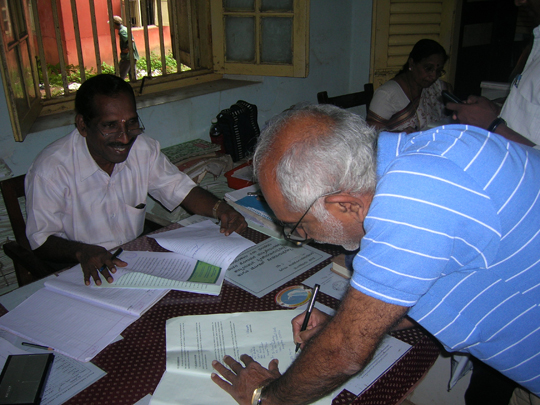 One of the most (in)famous dens of corruption is the registrar’s office where documents of transactions of immovable property are registered. This write-up is about the procedures at the sub-registrar’s office in the state of Karnataka and my experiences there. Of course one can say that I am a noted personality and therefore could get away with the way I behave at such offices, but I have been acting like this from before when I became ‘noted’!

We tend to forget that government servants are paid from taxpayer money and have been appointed to serve the citizens. The office of the sub registrar who registers documents of properties, wills, trust and partnership deeds etc., is known to be one of the most corrupt of the government offices. It is said that even a paper will not flutter in the breeze there unless a bribe is paid. It also dominated by certain lawyers and so-called ‘document writers’. My first brush with the registrar was about 31 years ago when I got married. The registrar was brought to my father-in-law’s house for the registration of my marriage. Various amounts of money were demanded. There were receipts for each payment, except for an amount of Rs. 5/- which they said was to be paid as transport allowance, although had been taken there in someone’s car! No other payment was made. The registrar was probably free, as it was during Rahu kalam, a very inauspicious period. Hence no registrations would take place during this time and there was no ‘document writer’ involved in the process!

My next such event came when I had to pay a visit to the place for registering the purchase deed of a shop. This was done for all the purchasers at the same time and therefore there was probably no occasion to pay a bribe. Either that, or its possible that the promoter had already paid some amount; in any case I did not pay anything extra. 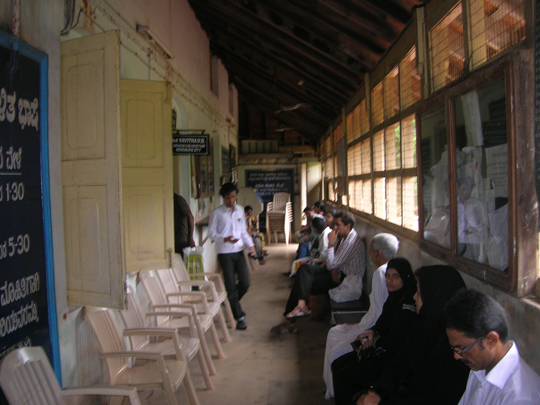 The next occasion came when I had to purchase a flat in 1998. I went for registration with the promoter of the project. The sub registrar was one Mr. Manjunath! When I saw him, he sounded familiar. He had been a sub registrar in the same place earlier and had been transferred elsewhere. During his previous stint he had refused to register a marriage and we had complained about this to the higher officials. An enquiry had been held and during that time we had a heavy exchange of words! He had probably manipulated to come back to Mangalore since it is a very ‘profitable’ posting! When he saw me he almost jumped out of his chair and glared at me! I put forward the documents and he said the property was under evaluated – it was in fact undervaluation- a flat whose declared value according to government was about Rs. 5,50,000 was being sold to me for Rs. 2,50,000. There was no other payment involved because there had been a court decree to that effect. We had been tenants of a house at the plot where the flats were built and the promoter had promised us a three bedroom flat for that amount so that we would vacate the premises immediately. This had been recorded by court decree! I explained this to him but he kept saying that it was beyond his powers. I told him to reject the document but state it in writing and I would not pay him a paisa. He replied that he had not asked me for any but since it was beyond his powers to register the document as it was, he was sending the same to the district registrar who was the higher authority. After some days I got a letter from the district registrar asking me to come and meet him. When I went at the appointed hour, he said that he did not know the location of the property. I told him that the address had been made available and that it was his headache. He told me that I had to take him to see the place and I replied that he had better use the government car which is provided to him for such purposes. He was furious and said that he would decide without seeing the place. I told him to go ahead and do whatever he wanted. It was obvious that he wanted to be ‘taken’ to the place and ‘convinced’ – both things which I was not willing to do. So, after few days I got a notice to pay the additional amount of duty on the undervalued deed and I did that. When the process was over I asked the clerk whether I had to pay anything more. He said I could give him something if I wanted. I told him that I was paying him his salary every month and asked whether he was not happy with that. He was taken aback and said that he did not want anything! So, that was the end of that story.

We have also registered organisations. In 1984 we had to register a trust called the Consumers Education Trust of Mangalore and one of our trustees who was a chartered accountant had drafted the deed. But, when we took it to the sub registrar for registration, he rejected it saying that it had no signature of the person who had drafted it. He said the rule was that such deeds could be drafted only by a document writer or a lawyer! We had decided to go back, but we saw a lawyer who was known to us. He signed the deed as the person who drafted it and it was accepted.

A few years ago I had decided to buy a plot of land at place called Guruvayankere near Mangalore and the whole process went through without any bribe to the sub registrar as I had specified when I purchased the land from a friend of mine.

The latest incident took place on the 30th July 2011, when I had gone to register our ‘Aid Without Religion Trust’. The trust deed had been drafted by my cousin, a chartered accountant. I wanted to get the same registered on the particular day considered to be the most inauspicious in Mangalore and at the most inappropriate time ‘rahu kalam’ which is an all-India phenomenon. When I went to the Mangalore city sub registrar’s office at 9.45 am some of the people were already ensconced in their chairs – a wonder indeed for a government office. But remember, this is no ordinary government office but that of the sub registrar, supposed to be one of the most lucrative of posts! 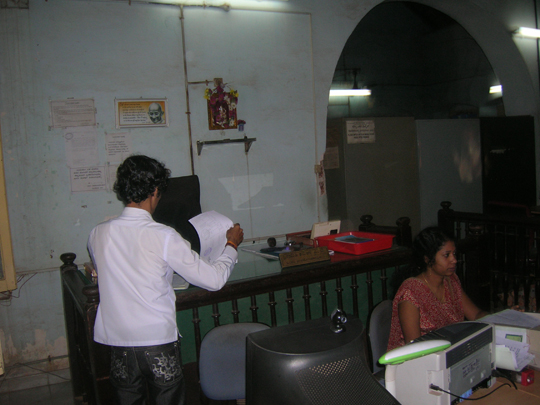 They had a token system in place and I told the concerned person in charge that mine should be number 1 as I was the first person in. He agreed. When I was showing him the papers, the lady sitting at the next table got irritated and told me that I should take a group photo when everything was over. I asked her whether she had objections to taking photos and that I would continue to take photos even if she objected because it was a government office, a public place and not her personal property. Then she asked me for the camera when I queried why, she said she wanted to take my photograph. I told her that I had no objection at all to taking mine but she should do that with her personal camera and not mine! Then we waited for the sub registrar to turn up and she was late by 30 minutes. As soon as she came in the owners of the document of token number 2 were at her table. I protested and asked them what was the point in giving the token numbers if it is not followed. So, the papers of token # 2 were removed and mine put on the table. Then I asked the sub registrar what the office timings were. She said the office opened at 10 and everyday she was on time and she apologised for the delay. It is probable that this must have been the first time in the history of the office that someone had questioned their time! So, the entire task of registering a trust went on without paying a paisa as bribe, without budging an inch and in time! By that time one of the TV channels had come to record this event. I went to the lady who had objected to my photography and told her that I was apologising for taking only still photographs. The TV cameraman would set things right by taking video footage. I could sense the rage in her looks!

So, it is possible to register documents without paying a paisa as bribe, taking the help of a ‘document writer’ or lawyer and getting things done on time. In fact, the documents must be returned to the registering person the same evening after completing the formalities! Since most of us are unfamiliar with the procedures we fall prey to the machinations of the staff of the office who are hand in glove with the ‘horde of brokers’ usually seen outside the premises, acting as though they are the official agents of the government.