The Minister of Water Resources from the nation of Mardangistan, Shaan Lirhani, is on a tour of neighbouring Mardania. Mr. Lirhani plans on meeting his Mardanian counterpart and discussing matters involving the Akalmandi river hydro-electric project, among other issues. The water of the Akalmandi river flowing between Mardangistan and Mardania has been a source of great tension between the two countries for decades. The conflict dates back to the drought of 1922, the year when the water stopped flowing for a whopping six months. Both Mardanians and Mardangistanis have claimed ever since then that the contested portion of the river lies on their side of the border. Perhaps today, after sixteen border wars and numerous mud-slinging bouts in the international arena, the thirst of both nations will be quenched. Mr. Lirhani’s ambitious water project – simply named “Akalmand” – proposes equitable water sharing between both sides, and a jointly-constructed hydroelectric project that will create a reservoir for irrigation channels all year round. It could well be the deal of the century.

The media, however, has focused on the minister’s dashing good looks and his stylish demeanor. It is well known that he is a “pretty boy” who likes to dress in

Armani and Gucci suits and drives a Cadillac. A lot has been said in the press about the fact that his father was the 9th president of Mardangistan, but he insists that he went to Cambridge and earned his medals without the help of his family’s connections. But whether he did well in college or not, the image of a rich boy with loose inhibitions, often seen in skimpy clothing on the yachts of rich heiresses and caught by the paparazzi cameras in compromising positions around the sprawling country estate of one Baroness of Winspur, had caught the public’s imagination. A recent portfolio of him posing wearing a range of designer kilts during a visit to Scotland caused quite a stir globally and raised hackles among conservatives back home.

The current visit to Mardania has made it to the front pages of all major newspapers in both countries. In Mardangistan, The MarDangi Times went with ‘Opening batsman material now water-carrier in Mardania’. Across the border in Mardania, The Danian Express splashed ‘Wet!Wet!Wet!’ across its front pages, featuring photographs of a swimsuit wearing Lirhani vacationing on a beach in Kokkum.

The news channels in Mardania ran the story of Lirhani’s visit non stop, with one of them even interrupting its weekly astrology show to talk about how Lirhani’s new burgundy Berluti loafers made a bold statement and were turning heads. MDTV presented panels of experts on haircutology, predicting the minister’s mental disposition based on the hairstyles and the headgear he sports. In fact, one of the experts was all praise for the minister and suggested that others in politics could learn a thing or two from Lirhani’s sense of style and panache. The channel quoted the professional as saying “Too much emphasis is placed on what is between the ears! Now that is beginning to change for the better!”

There were some people who didn’t see all the attention that the visit was getting as a good thing. During one MDTV show, a young boy suggested that men should not be objectified. His female companion laughed and said “Come on yaar, it’s just a bit of harmless fun! Lighten up and learn to take a joke, will you? Girls will be girls’. When pressed by a reporter, the young lady said “I know it’s considered chauvinistic to focus on what powerful men are wearing instead of what they’re saying, but we live in a visual culture, so get over it. I mean, check out his six-pack and cute butt. If he doesn’t want us to see, why would he dress up like that? He is enjoying all the attention he gets.”

One commentator suggested that hot guys in Mardania with “zing and oomph” should also enter politics so that politics would become more interesting to the young ladies.

A popular SMS doing the rounds in Mardania is “Just let us keep Shaan…You can keep all of Akalmandi!”.

In fact, the social media buzz started long before Lirhani landed. Within hours of Lirhani’s visit to Mardania being announced, #MardangiPosterBoy was already trending on Twitter. “We now have another good reason to screw Mardangistan. #MardangiPosterBoy” tweeted one famous talk show host. “Mast forearms, but a bit too top-heavy, needs more leg work #MardangiPosterBoy”, another B-list celebrity sent out.

There were raised eyebrows at the National Press Club on Saturday, when one reporter asked Mr. Lirhani- “Your wife is the former foreign minister of Mardangistan, and many people seem to think you owe your position to her. What does she have to say about your proposal?” Mr. Lirhani angrily responded: “My wife? Why don’t you ask me? I am the minister here”. Some people say temperamental outbursts like this do not lend much confidence in Mr. Lirhani’s chances with his landmark proposal. Only time will tell. 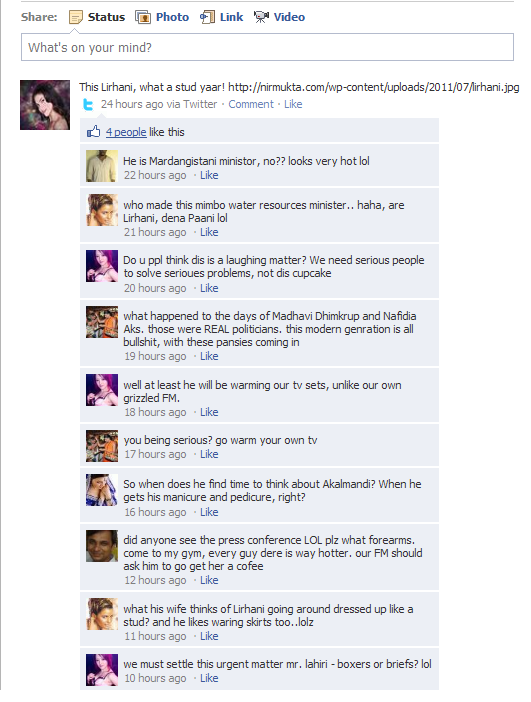 The women’s magazine ‘Playgirl’ back in Mardangistan interviewed his wife who is now a leading industrialist. The magazine wrote

‘Mrs Lirhani had only words of praise for her husband. “I am so fortunate, god has blessed me with a husband like him”, she said. “When I see him looking good, it makes me feel good. Men do look good, and they like looking good for women and we should not be ashamed of it”. And we at Playgirl agree. He has a finely shaped derriere and he could use it to his advantage. Check out those ripped forearms, we say, flaunt your assets man! Warm our TV screens.’

The consensus among the media pundits is that today’s boys need to be both strong and smart, have good bodies, and a minister like this one is a good role model for them.

Not everybody is impressed however. Fashion diva Arika B is one of those with some words of criticism for the handsome minister. “For most men, pleats are a no-no – no matter how good a brand you’re wearing.” Some are even more critical; an anonymous commenter at the news website Whee-diff.com wrote, “He is a puffed up pretty boy, who has no business doing politics in are (sic) great nation. He should go back to his parties and steaks.” Arika B was, however, able to appreciate some of Lirhani’s achievements, saying “I have great respect for his intellect and his tenacity and for what he does for our country in his governmental role. I just wish he could send a stronger message about Mardangistani fashion.”

The project that on paper looked as taut as the Minister’s butt might, unfortunately, turn out to be a sore bum given the protests and criticisms of the man himself. The minister has complained on more than one occasion that he brings a solid plan for water sharing, but no one wants to listen. One person, though not in the mainstream media, had good things to say about his plan. Bee News on Monday did a feature on a remote village near the border where the hydro-electric project proposed by the minister was to bring electricity and water for irrigation. The reporter came up on an elderly woman hunched over a near-dry tubewell, as she pumped till a few drops of brownish water dripped into her pot and turned to the camera with the words “We’ve heard he is a famous person, but have not seen him. We just want water.”

After a gruelling trip, meeting dignitaries all over Mardania who were all eager to shake his hand, commenting about his presence and how they were enthusiastic that they could meet him, Lirhani appeared at a scheduled press conference in the capital where he fielded questions from the press. The questions were relating to the details of his trip to the nation’s monuments, the comfort level at his hotel, what he did to keep in shape while travelling and whether he found the shopping up to the standard for his refined tastes. After an hour of this, Shaan Lirhani lost his temper and lashed out at the media with a passionate speech about how Akalmand was vital to the sustenance of 7 million people and why they had failed to do their duty of covering the important story by focusing on extraneous and superficial issues. He finished by throwing his hands up, asking in exasperation, “Does nobody care about Akalmandi anymore?”. There was pin drop silence. After a long pause, a reporter with the MarDan Daily cleared his throat and asked,
“Minister, about that picture of you in Scotland…”