The 7th Chennai Freethinkers’ Meet was an experiment. For six months, since that first meeting in January 2011 we have been taking baby steps – meeting every month, sometime at the beach, sometime at the Planetarium and if there was nowhere else to go, we had a safe haven – Balasubramaniam would welcome us to his office. And so our journey went on – not knowing each other too well but sure that somewhere we shared a common world view and a passion for logic and reason. There usually were 5-7 of us attending the monthly meetings and whenever the figure reached double-digits, it was a cause for celebration. 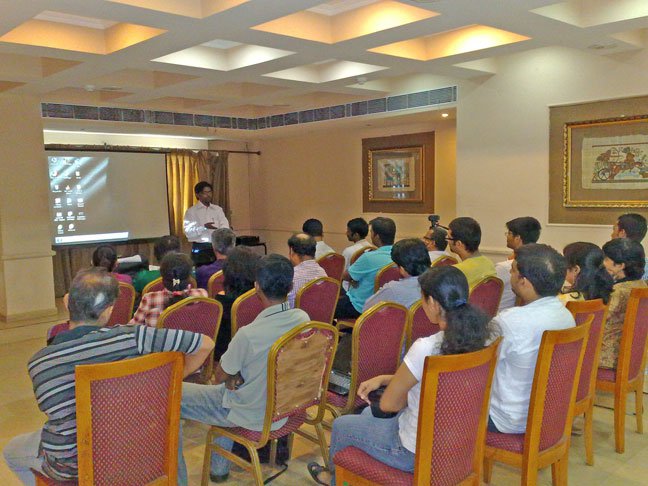 It was not that after six months we had formed a solid cohesive group and were confident in taking the plunge to organize a full fledged programme with presentations et al; but we did take the plunge and oh what an experience it was! We had booked a hall at Hotel Park View (Hotel Park, not too far into the future, Srinivasan Madhavan). The meeting was scheduled for 3 pm, but we took some time to set up the projector, screen and camera. Slowly the room filled up and we had to ask for extra chairs! There were about 25 of us and quite a few new faces at that. Balasubramaniam gave a brief introduction and thankfully made the point that those who were making the presentations were not experts but just wanting to share what they know and what they feel passionately about. Reminded me of Carl Sagan saying in his ‘Demon Haunted World’:

“Not explaining Science seems to me perverse. When you are  in love, you want to tell the whole world.”

We started the programme with an ‘invocation’ – to Science, actually, by watching Alom Shaha’s video ‘Why is Science important?’ This was followed by a skillful and informative presentation on Social Equality by Dr.Ezhilan Naganathan of Youth.org. Geetha Tg made a presentation on ‘Does Science rob us of our Sense of Wonder?’ Dr.Ganesh Veluswami made a thought-provoking and entertaining presentation on ‘Is Astrology a Science?’ Sanjay Kumar made an interesting presentation on ‘Is Quantum Physics a mystical subject?’ Bala Subramaniam made a neat and scholarly presentation on ‘Is Evolution a theory or a fact?’ Bala Bhaskar could not attend the meeting and make his planned presentation as he had to go outstation on an urgent work.

Geeta Charusivam has written a wonderful review of the presentations and has given highly useful suggestions which I assure would be taken into account in the future.

This was followed by a lively discussion and what was heartening was that first timers like Geeta Charusivam, Johny, Johnson and Habeeb Rehman participated and put forth their views. When Johnson detailed the questions on Evolution that he frequently faced from theists and wanted to know how he could tackle them, he was asked to check out talkorigins.org from where he could get the resource material. When Johny said he was an agnostic and he was looking for answers to several questions he was encouraged to continue with his search for truth. It was a touching moment when a member confided that he was estranged from his family as a consequence of his atheism and the group responded saying that he had a family in them and that he could ask for any help any time. The discussion went on for more than an hour and it was nearly 8 pm when we reluctantly wound up the show- but not before Udhav Naig talked about ‘the elephant in the room’ – The Rebecca Watson-Richard Dawkins episode. Of course each one of us held different views and Sanjay pointed out that the incident proved that for the world atheist community, atheism might be the only common thing and  it could be seen that some of us were sexists, racists, etc., He was told that we do not claim to be Chennai Atheists but Chennai Freethinkers and hence we need to base our world view only on ‘science, logic and reason.’

I do not know if the meeting could be termed a grand success. Those making presentations were obviously novices – we fumbled for a word here and rushed with our words at times. But the experience has made us more responsible – we were able to point out the strength and weaknesses in our presentations to each other and we resolve to take steps to better ourselves. We realize that we were facing a mostly sympathetic crowd this time but in future we may face a hostile crowd and it is then that our thorough preparation would matter – to face the onslaught of criticisms and counters.

But then we have already started planning for our next meet – Neethi Seenivasagam’s family (their daughter is the youngest freethinker in our group) has extended an invitation to hold our August  meeting in their house. And so we make plans for tomorrow – how we can ask the obviously intelligent youngsters like Einstein Deepak Raj, Girish Shankar, Blaise Leslie, Johnson, Udhav Naig, Johny and Habeed Rehman to either make presentations on various topics or share more about their experiences; how we can ask Geeta Charusivam to share with us her experiences in social activism and devise means to reach out to children; how we can benefit from the expertise of Dr. Jagan and Dr. Nagalekshmi, and so on.

Thank you, Chennai Freethinkers – we sure have a long way to go, but the journey promises to be fun and interesting. 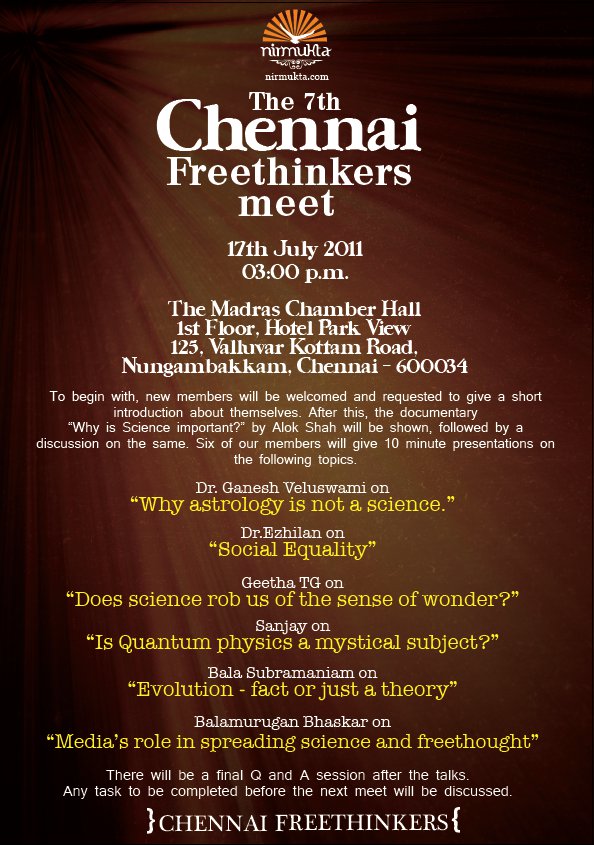