I have two sisters that are gay. One of them has been trying to adopt. All three times they have decided to give the children back to abusive or bad situations instead of placing them with two lesbians…

After the first two my sister was not looking to adopt. Her heart had been broken but social services knew her and contacted her about a little boy and girl. They had been abused/beaten. The little girl had a broken arm and didn’t speak. The mom was the abuser and a drug user. The father had been abusive in the past but now was in prison for something unrelated.

My sister had these children for 4-6 months when social services told them they had been awarded to the grandmother. At this time the girl could speak and both children were doing well. They had their own rooms, a yard, a home, three little dogs and two loving moms.

The court placed them with an ex-abusive grandma in a home that was full of violence just with the grandmas children. Grandma works 6 nights per week. So the children go to school all day and then get picked up by the baby sitter. The grandma gets them at night while they are sleeping. So grandma actually only has the opportunity to see them on Sunday.

The children had now been gone two weeks and her grieving was over, when she gets a call saying the children were missing. Grandma apparently gave the kids to mom…who was very pregnant and on meth. Mom showed up at a hospital the next day to give birth. Social services gave them back to my sister assuring her that they wouldn’t go back to mom, dad or grandma…

Three days later they took them again. You can’t imagine how heart broken she is. She wants so bad to be a mom.

She had tried to conceive but was unable.

So what kind of a court system or judge who is supposed to have the best interest of the children in mind would keep putting children back into abusive homes? My sister is a Doctor. She makes very good money. Her spouse makes very good money. They are very good people. They are always doing cool things….I want to be adopted by her! Those kids would never have a want or need. Their college would be paid for…and yet two poor kids would be better off in a house were abuse and drugs go hand and hand. 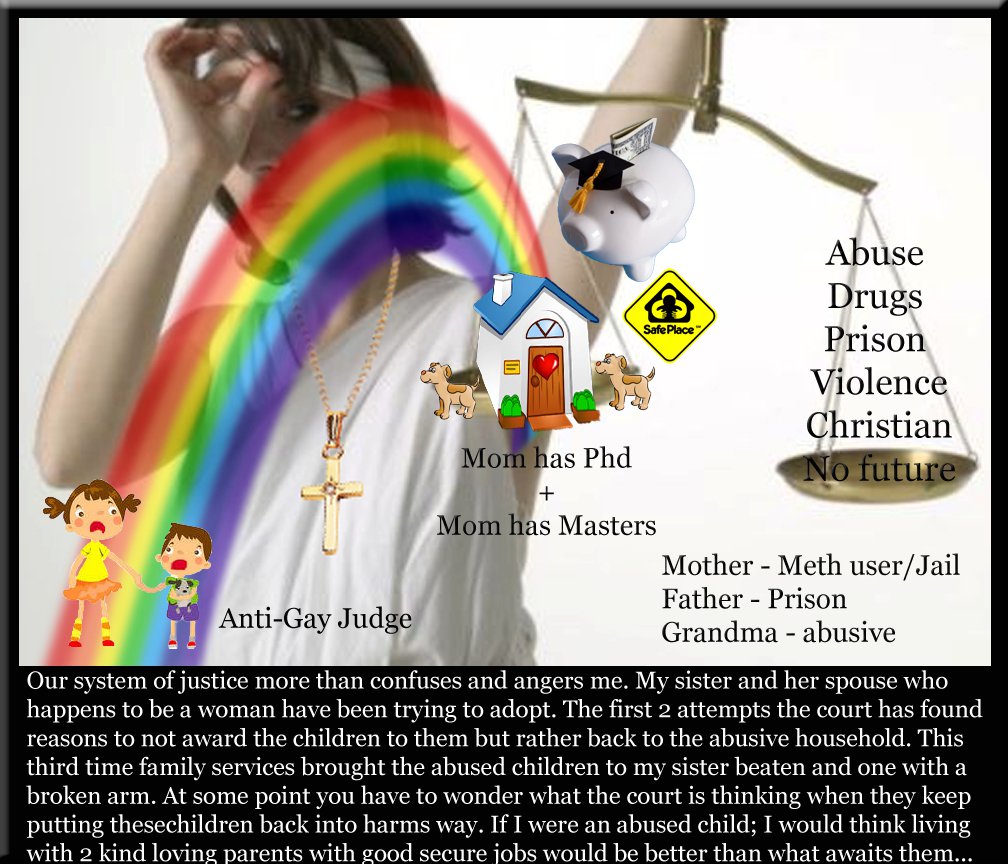 What chance will they have growing up in an unsupervised household? Will they turn out like their mother? Father? I wish those children love and luck. I hope they make it unharmed.

We have a long way to go in this country before gays have the same rights as straight Christian bigots.

Editor’s Note 1: This message was posted exactly as is by Michael on his facebook wall. It has been reproduced here with permission in its original form. We could not do justice to the pain and raw emotion captured by those words if they were edited in any way.

Editor’s Note 2: Michael is talking about the United States where these events went down, in the last line of his post.