When Channel 9 from Australia wanted to shoot some footage of our movement for a program called 60 minutes, I chose Tamilnadu for a number of reasons- one of them being the fact that we have had quite a number of these shoots in Karnataka, particularly the coastal regions. When we informed our comrades within the movement in Tamilnadu, they were very happy to get involved. We must appreciate the co-operation of the Chancellor of the Periyar Maniammai University and the leader of the movement, Dr. K.Veeramani, and the Vice Chancellor of the Periyar Maniammai University, Dr.Ramachandran, who really took it upon themselves to see that full co-operation would be given and our guests would be well looked after. We had the producer Gareth and his son Brendon, Savitri Choudhary, the director and Gurmit weilding the camera.

When the time came for shooting superstitions, one of most important ones, Nadi Jotidam, was the choice. There have been write ups eulogising this so-called ‘science’ for both its breadth and accuracy, in telling the person whose leaf was being read about the past, present and future. In my previous investigations I had discovered that what was being done was cold reading, and I, being an old hand at misleading such people, can run circles around them. So, that was exactly what I aimed to do now. Added to this was the prospect of filming the Rationalist Club of Periyar Maniammai University, a village program and unmasking one of the so-called fortune tellers sitting outside the temple gates at Tanjavur, a location which we had already visited last month when I had been there. On the last day we had in mind a meeting of the Chennai Freethinkers at Periyar Thidal to bring into contact the old and new generation of rationalists. All these programs were perfectly arranged by the Tamilnadu Rationalist Forum, PM University Rationalist club, Chennai Freethinkers and others. Babu Gogineni, the executive director Director of  the International Humanist and Ethical Union, was also interested in these activities, particularly in unmasking of Nadi, and to meet the Chennai freethinkers.

On the first day, the 8th of June, we went to Vaitheeswaran Kovil, the most ‘famous’ of the places where ‘accurate’ predictions are made about one after searching for the appropriate bunch of leaves on which that persons details have been noted not now but thousands of years back. Here I pretended to be my brother-in-law, my sister’s husband who had passed away in April, 2011. I drew a prediction of a long life, and many of my problems were identified- my good, obedient eldest son, and the prodigal second one who had married a low-caste woman, which had caused problems with the marriage of my daughter leading to her engagement being broken. It was also said that I was a brahmin at Palakkad in my previous birth and had died at the age of 40.

Having identified the problems, how could there be no solutions? I was told to perform some pujas at the temple for about three months at regular intervals. Solutions were guaranteed! The next day we went to meet another Nadi Jotish who had his own theories about Nadi leaves and all that. His specialisation was taking fingerprints and then searching through the leaves for the ones that matched them! Our friend Babu was the subject and his leaves were being searched for. The ‘expert’ sitting in an air conditioned room was very gracious. He said that there are ten books for every person, and it was his job to identify the right one for each. He would do so by asking personal questions and then finding the right one. After this was done, he assured us, it would be smooth sailing. He would tell us all the details from our past, present and future. The entire problem was identifying the right one! Despite of all his questioning and probing he could not identify the right set belonging to Babu! When we walked out leaving Babu to his fate, he followed us in a few minutes with a smile. The search could not be completed as Babu’s leaves seemed to be missing. Babu told us that there were no charges but was told that he would have to pay after his set of leaves were found!

On the same day evening we traveled to Tiruchirapalli to visit the famous Brihadeeswaran temple at Tanjavur, and to also take a look at the parrot jotishes who sit in line outside the temple. We had visited that place a week ago, and had identified the proper candidates for a ‘reading’. In our team we had the set of young rationalist from the area- Kali Muthu: a professional magician,  Sindhu: a girl studying engineering, Ilangovan: a post graduate final year student, and us from Chennai. There were a dozen vendors on the street- some with parrots, some with cowrie shells and those of cucumbers. Gareth went around shooting them and giving them a hundred rupee note each. They were fascinated with this generous White man and agreed to be shot, particularly the parrot astrologers.

The sequence would be the same; the door of the cage would be opened, the poor parrot, whose wings had been clipped to prevent it from flying away, would strut out, pick up a card from a stack, and hand it over to the reader. The signal for the card to be handed over would be given by the owner who would be sitting across, watching it. He would then open the folded card take out pictures of deities and spin stories about them. He would elicit information by the process of cold-reading and then advise the client. It could be anything from a simple puja to a complicated ritual involving his guru and a plaque with mantras written on it that could ward off all evil and do good as well. I had assumed the identity of ‘Ramachandran’, a tourist guide from Karnataka who had come along with the rich White man. After he was paid a hundred rupees the Jotish agreed to be filmed. After his predictions I confronted him and asked him what was preventing him from performing for himself all the rituals that were supposed to bring me money, instead of sitting on the roadside with his silly parrot. He told me that his solutions don’t work on himself. Then I told him to take the advice of the man with the parrot sitting next to him. He laughed and was unable to reply.

The entire community  on the street was happy that they were being filmed, probably unaware that it was to expose them. I told them that whether it was the parrot card or Tarrot card, Nadi leaves or tea laeves, these were only props to create an atmosphere of awe. The actual predictions were done by cold reading. When I was asked as to why I was after this poor chap on the street, I had to say that our movement is like a broom- when we use it, both the large and the small debris are swept away together!

Our afternoon session was with the members of the Rationalist club of the Periyar Maniammai University.There we had discussions with the students about many subjects that could not be covered at the last session with them due to paucity of time. We also held a session to demonstrate cold reading as practiced by fortune tellers.

We summoned a lady from the outside who was an attender and started the session with her. I explained to her that I was an expert in astronumeropalmistry which was a combination of three sciences and hence very accurate. I wrote her name in English, made some calculations, and told her that her lucky number was 6. She was amazed. I proceeded to tell her how things had happened in her life in multiples of 6. I told her how there had been a very significant change in her life when she was six. She said that her family changed their house. The I told her that at the age of 12 there had been another significant evene in her life, which I did not want to mention in public. I went on to tell her that at the age of 18 there was another one, and she replied that she gotten married. Then I told her that the next event would have been at half of six-  in three years. Yes, she said, she delivered her first child. At that I said the next one should have followed in three more years. She said it would have but for the fact that she lost her husband.

Then I started telling her about her son- a very intelligent boy who loved her very much up to the age of six, was indifferent at 12 and would be a major problem by the age of 18. She replied that he was sixteen, that it was already happening and that people were trying to poison his mind. I told her that the problem was with Saturn who was casting evil glances on her family and persuaded her to to do a puja saying that gold was needed for it. I made her hand over her gold chain and ring, put them into a one handed change-over bag! Then I made them disappear and gave her a few toffees from the same bag after telling her that her gold had been taken away by the god. I told her to give them to her son to eat. It would change his mind and he could become close to her! She was fully convinced and was ready to forgo her gold! Then I returned it to her and told her that the whole thing was total nonsense, but she was not ready to believe that I was not the real thing. She told me that what I had told about her was completely accurate. Some of the audience too were convinced that I had the powers of prediction and wanted to know the formula that I had used to calculate her lucky number. They were not willing to accept that the whole thing was a sham. Then I had to explain to them how the Nadi readers read the body signals and elicit answers by asking indirect questions, and how all those props used by them are just a show to convince people about their powers. The conditioning of the minds of our people goes so deep that they find it very difficult to believe that no one has such powers of prediction. They are totally amazed when I talk about the past, apparently by calculating from some formulae and writing down numbers!

From there it was back to Chennai for the last part of the shoot- the meeting of the Chennai Free thinkers. This was held at the Periyar Thidal, with the office bearers of the Tamilnadu Rationalist Forum playing a very active role. In fact, the leader of Dravida Kazhagam, Dr.K.Veeramani, though was preoccupied with some other program that day, had seen to it that all the arrangements were made for the meeting. V. Kumaresan the General Secretary of the Rationalist Forum, Prince Periyar, the young dynamic secretary of the organisation, and Dr. Ezhilan were the prime movers for the whole program. Babu Gogininei the Executive director of IHEU, spoke on the occassion. Dr. Ganesh Veluswami, the President of Chennai Freethinkers, and Bala, were the active workers from the Chennai Freethinkers. We had very good interactions and it was a sort of bridge between the two set ups- the well-organised Tamilnadu Rationalist Forum and the budding young enthusiasts of the Chennai Freethinkers. After the formal meeting we had an informal interaction outside the hall and various ideas were exchanged about furthering the movement in Tamilnadu particularly, among the middle-class and professionals in Chennai. 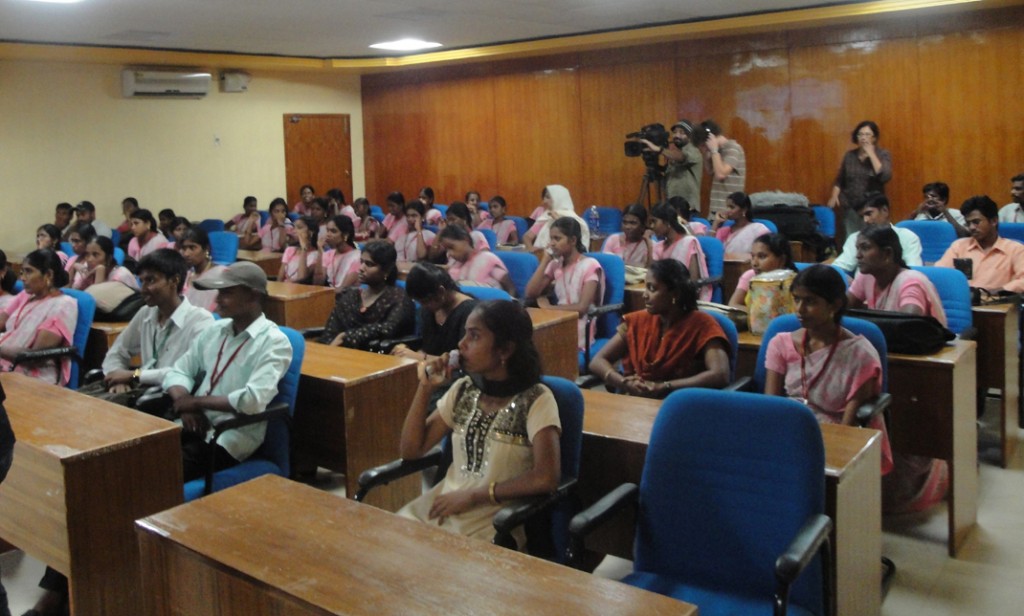 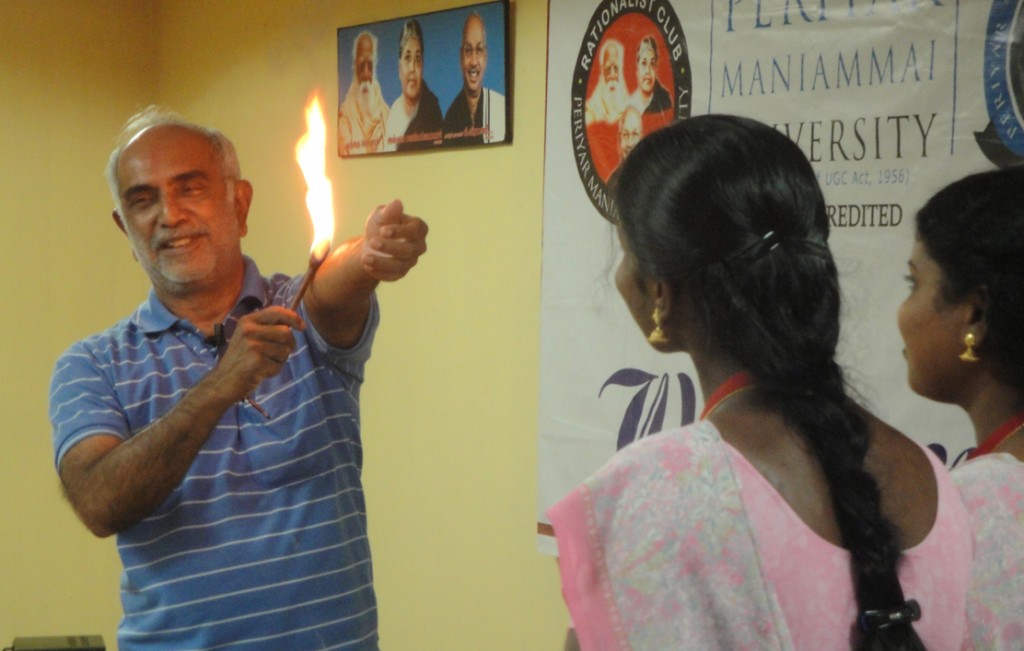 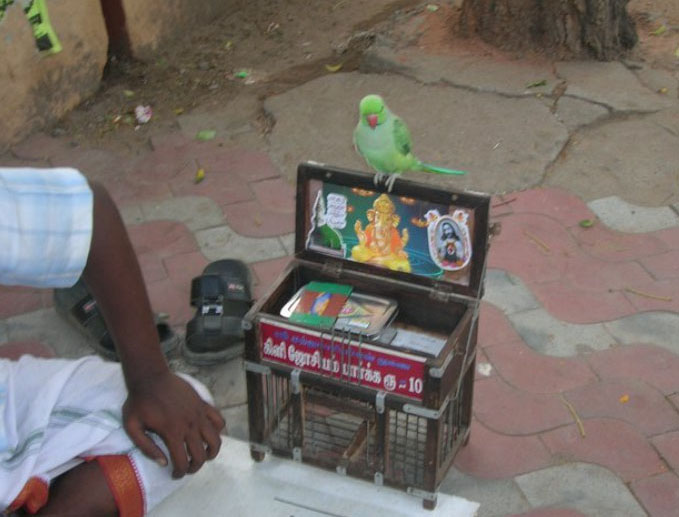 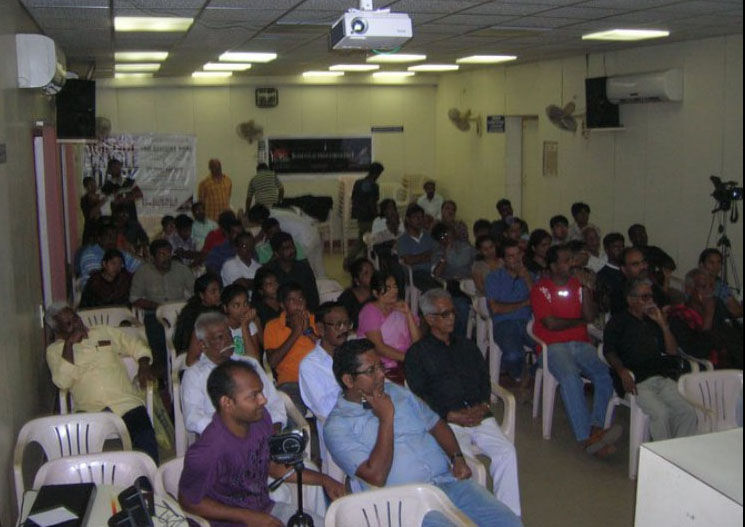