Since there has been no rain in Dakshina Kannada for the past several days, Baba Narendra Dev decided to go on a severe fast until death between breakfast and lunch. As it was approaching lunch time, Devendra, the god in charge of rain, appeared and told him that he would have been glad to give rain, but there were some 81 students of Gandhi Nagar Higher Primary school in Mangalore who would suffer as they had no umbrellas!

Said Devendra, “O my son, supply umbrellas to the 81 of them and I shall give you rain”.

So, it was decided to hold a yagna called as Chatri Yagna in other words the umbrella ritual! In the state of Karnataka, or probably anywhere in India, it is not considered strange to marry frogs/donkeys , dig up dead bodies and perform prayers for rain. The Chief Minister Sri B.S.Yaddiyurappa has gone on record that it was he who prayed and got rain for the state last year. But when floods resulted he blamed dams in Andhra Pradesh for them. Recently he and an ex-Chief Minister of Karnataka had a dispute which they wanted to settle in the presence of a temple deity by taking oaths! 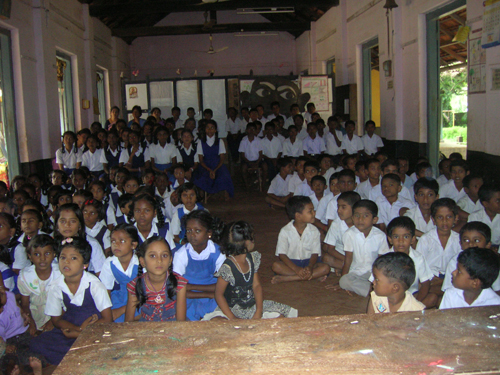 But of course the young children of the Gandhi Nagar Higher primary school would have none of that. Before handing over umbrellas to them we asked them whether it would rain if they were given umbrellas- they said no. When we asked them whether performing marriages between frogs or donkeys causes rain, they said no. When asked whether performing pujas would bring rains, they gave a derisive laugh. So, it is the prerogative of the adults, particularly the political class, to bring superstitions into every aspect of life!

It was a group of happy children who received their umbrellas. The week before this we had given them note books, as we have been doing for a decade now. The help from us rationalists come without strings- we do not ask the children to sing songs of worship to any god and we don’t want our photos to be put up in their premises. We ask them to do just one thing- to put things to the test of reason before accepting them! 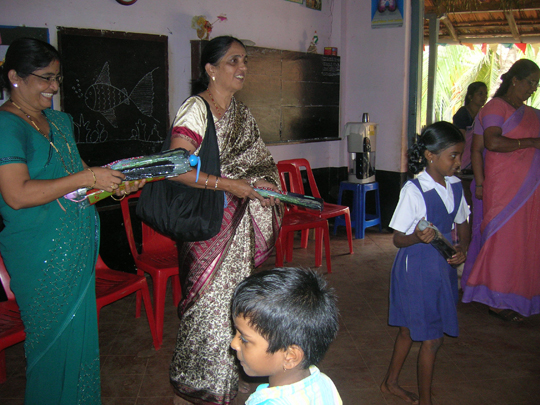 We know that this is no great aid but a small deed for those of us who have to use our hard earned money for such work. The Gandhi Nagar Government Higher primary school has been the recipient of such help from us. This school has students from the socially and economically backward sections of society, and we try our best to help them. Dr.Srinivas Kakkilaya, an active member of our movement and an alumni of the school, was also present.

Update: And it rained on the night of the 23rd. See how successful the yagna was! This is how our Babas and miracle mongers act. Fooling the people!