Chapter V, verse 18 or verse 5.18 of the Bhagavad Gita (BG) is literally translated by Chinmayananda as:

“Sages look with an equal eye upon a brahmana endowed with learning and humility, on a cow, on an elephant, and even on a dog and an outcaste“

Here goes a part of the great soul’s explanation to this verse:

“The gold-seeing goldsmith considers but the gold in all forms; he cannot see the distinction of Rama-gold from Sita-gold, or the Lakshmana-gold from Hanuman-gold. Whatever be the form, it is all gold. The Self-realized sage after his experience of inner Divinity, sees nothing but the same Spirit everywhere and, therefore to him a man of knowledge and humility, dog, or an elephant, or a dog-eater are all different containers containing the same truth“

Our analysis of the comment and concern at the mutilation of Queen’s English
The Guru rarely ever launches into his exposition of BG without his characteristic poetic and figurative flourishes, so what if it is with all the might of savagery.

Let’s witness and explore the involuntary and unwitting poesy of the Gurudev in the alliteration of the phrase “the gold-seeing goldsmith”. Without hastening into any judgment of the alternating retardation of poesy and prose in the commentary, let us see what inspirations are evoked by this placement of sounds. One would have thought the phrases ” silver-seeing Silversmith” or “black-seeing Blacksmith” as phrases contending for the glory of figurative comparison. We were almost proceeding to coin an alliteration based on “wordsmith”, but reined ourselves in out of a sneaking concern for the effects of the inflictions of alliterative barbarity on an already mortified language.

Our grudging acceptance of the Gold standard of spirituality
Yet we must pronounce with a sense of grudging reluctance that the “gold-seeing goldsmith” out-shines the rest. Do we espy a gold “seer” in this gold-seeing goldsmith, as in a prophet of gold?. The days of the gold ‘bug’ and the gold ‘bull’ are passé. We are witnessing the ascent of the goldsmith to the golden heights of seer-hood. Lest we get blown away in our own mistaken awe of the gold-seer, we are provided with an enumeration of the kinds of gold among which the goldsmith perceives little distinction. These kinds are the Rama-gold, Sita-gold, Lakshmana-gold and the Hanuman-gold. What are they? Mere titles or designations or brands of gold and jewellery imbued with luster of the Ramayana?

Hold back thy pernicious insinuations, O vile profaner of the devout, and listen to the parable of iconoclasm that preceded the seer’s commentary.

Our feeble effort at recounting the great story-telling skills of the Gurudev
Unfortunately, in deference to the rules of parody we are constrained to paraphrase or shorten this parable instead of hearing it being narrated in the Gurudev’s inimitable words. So as the parable goes, a rich youth by his reckless and dissolute ways squandered most of his inheritance and in the end was left with the only resort of disposing of the idols or icons of Sita, Lakshmana, Hanuman and Rama to that gold-seeing goldsmith. Here we connect the dots with that gold seer again. To continue the parable in our own insipid way, somehow that goldsmith being unaware of the modern methods of transacting gold and jewelery, used to smash those idols in order to weigh them and pay the youth on the basis of the weight of gold.

Though the young man as well as we couldn’t comprehend why the gold idols must be smashed to weigh the gold in it, we do not possess the temerity to dispute this testimony of the Gurudev.

Back to the youth, though he held his composure through all the barbarism of the idol-smashing, he let loose his litany of complaints when we saw that the 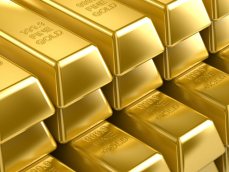 Rama-idol was paid the same amount of money as the other idols. While we would like to add our sympathetic voice to the remonstrations of the youth at the desecration of the icons of Ramayana and especially the inequity of monetary value for the Rama-idol, we are checked by the Gurudev’s admonition of this un-spiritual gripe of the youth.

As we seek deeper meanings in the Guru’s commentary, it dawns on us that all that the gold-seeing goldsmith sees is gold in all forms, even if it means that gold may have to be smashed to see it in a smashed form.

In all humility we must pay our tributes to this worthy successor of Midas and shed a tear for the gold-crossed youth.

Moral of the story and an important lesson for the gold industry
Another insight of the Gurudev’s fable that has somehow escaped the gold industry is that gold could be smashed instead of going through all the trouble of smelting it. We appeal to the gold industry with all its gold-seeing goldsmith members to seriously consider this energy-saving method of converting gold into well! Gold.

The leap from gold to divinity and the spiritual ‘containers’ of truth
Leaving the goldsmith to his gold, the guru describes the experience of inner Divinity of the Self-realized sage. Apparently the luster of this inner Divinity is more blinding than the luminosity of the yellow metal, that the Self-realized sage becomes blind to the distinctions between the man of knowledge and humility, dog, or an elephant, or a dog-eater. Yet to be so blinded, we somehow suspect that the out caste of the BG has turned into dog-eater who is to receive the same condescension, sorry consideration from the sage as the dog, or an elephant. Leaving the poor animals with the Hobson’s choice of an indifferent sage and a dog-eater, let’s turn to the wonders of the experience of inner Divinity. There the goldsmith saw only gold and here to the Self-realized sage all “are different containers containing the same truth”.