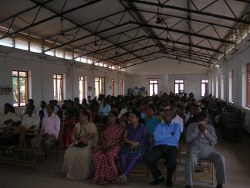 The community of Koragas of our district are the original inhabitants of this area, and are, as to be expected, the most backward too. We can call them the Dalits among the Dalits. They are so by a conspiracy of circumstances and the machinations of the “upper castes”. For, the members of this community are very much needed to dance and beat their drums when processions of gods are being taken, to take away the carcasses of the holy gau mata, to transfer the evil effects of planets to them etc. Last week when I was invited by my friend Krishnappa, who is also an office bearer of the Dakshina Kannada Rationalist Association, to be a guest for a book distribution function for them. I was very happy to be present there. Though I am not a sociologist having done any research work on their customs or socioeconomic status, I can vouch for some of the incidents that happened to me and made me think about untouchability and other issues they face that are concerned with affirmative action.

One of my first brushes with untouchability was as a little boy when I tried to touch a woman who was being given water in a coconut shell at our house . When she went away my mother told me that I was an idiot for trying to touch her – she said though she is an untouchable she has far more sense than you, see how she was moving away when you tried to touch her! Our other brushes were with those Dalits who came to carry away the excrement- politely called ‘night soil’- in buckets on their heads, and cleaning those dry type toilets which were in vogue at that time. These buckets used to be emptied into larger containers, which were then carried away on trucks to be dumped at remote spots. This practice was totally stopped later and all such toilets were demolished. In some of the well-planned localities, where there were separate lanes to carry away this excrement, politely called ‘conservancy lanes’.

The Koraga community is the most backward along these Dalits and also the one with the highest degree of untouchability. They were also referred to Girijans- as people of the hills, to prevent the use of the word Adivasis- meaning original inhabitants, which would be a blow to the Hindutwadis who always like to claim that the Manuwadi castes are the original inhabitants! These Koragas have been always looked down upon by all others. They were supposed to dance and beat drums when idols of gods and goddesses are taken in procession from temples, remove carcasses of cattle, take away the bad luck and these used to be called Agelu. With laws banning untouchability these practices have been stopped but are done clandestinely. These people used to take away the leaves on which people have partaken food, to eat the leftovers. This has been totally stopped now. Since the marriage season was usually during the summer, they also used to dry the leftovers in the hot sun and preserve them. In the lean days during the monsoon this used to be reconstituted using water. When I was young it was a common occurrence that this community people would fight cattle and dogs for the leftovers of the banana leaves on which people had eaten and thrown away at religious functions. A variant of this is the practice of rolling on these leaves for getting cured of skin diseases in some temples. 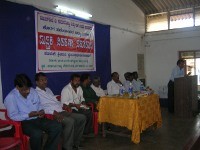 Among the Korgas I used to see one of them at close quarters while doing what was called ‘feeding the Dalit’- of course I am using a very mild term for the derogatory words that were used! When the horoscopes of the well-to-do and the “upper castes”, not necessarily in that order, would show evil planetary combinations, one of the remedies prescribed was the above one. On a new moon day, the Dalit woman would be invited home – not inside but outside!– made to sit with a banana leaf in front of her with a heap of rice and some crudely prepared horse-gram curry, and a measure of oil would be poured on her head. This oil would drip down her face and she would try to salvage what she could to apply to the dry hair of several children who would be with her!

Sometimes, a clipping of hair or nail of the suffering person- I mean the one with the ‘wrong planetary configurations’– would be added discretely to this heap of food. A small coin would be also handed over for this service! I recall one such instance in my life when my ‘planetary configuration’ problems were to be got rid of by this method! When I asked my mother why it was being done she told me that it was to transfer my bad luck to the woman. I was perturbed, because she had a few small children. When I asked my mother what would be their fate if something were to happen to her, I was ordered to shut up. Like all mothers she wanted her child to be safe and not bother about others! The plight of these people has been described very well in a novel by Dr.Shivaram Karanth, a well known Kannada writer and Gyan Pitha award winner, which was later on made into a national award winning movie called Chomana Dudi – the drum of Choma. Even their names would be typical of their community- they were not allowed to give their babies the names of gods and goddesses which the “upper-caste” Hindus would embellish their children with!

One of their main problems are the superstitions that are put into their minds starting from a very young age. They are fed nonsense about spirits, ghosts, demons and even their own inferiority. Since they started getting converted to Christianity by the help of the missionaries the Hindutwa gang woke up and started their plans to ‘uplift Dalits’. While most of the heads of the religious institutions did not bother about them, some of the more hypocritical ones started lecturing them about the greatness of Hindu religion and the danger of conversions to other religions- of course they did not mind them converting to Buddhism as much as they did their becoming Christians or Muslims! Anyway, Dalits would not like to convert to these ‘foreign religions’ as it would deprive them of the benefits of caste-based reservations- the favourite whipping boy of the upper caste, middle-class Hindus. The Catholic missionaries too took advantage of this situation and converted them to Christianity. It just changed their religion and not their caste- they became Roman Catholic untouchables!

Today I was happy to attend the function arranged for the distribution of books to them. I am often invited to their functions a 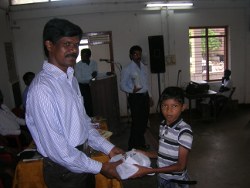 nd protests but since I am out of station most of the time I have been unable to attend most of them. Today’s function was well organised – a double event. There were about two hundred of the Koraga community assembled to distribute books to needy students and also to felicitate Dr. M. Babu, the first Ph.D among the Koragas, who has done his research in applied chemistry. The topic of his thesis from the Mangalore University – Synthetic and Biological Studies on Nitrogen, Sulfur and Oxygen-Containing Heterocycles. The function was attended by a number of dignitaries of the Dalit community and the leftist trade unions. The children were very happy to receive the books and to be touched by the dignitaries on the dais! Every one of the children shook hands and were embraced by us who did the handing over of the books by turns. I was very happy to be among these deprived children. In my short talk I told them the circumstances that initiated my conversion as a Dalit and also that they should be careful about the machinations of the “upper castes” who have even made the Koraga superstitions inferior to the “upper caste” Hindu ones! Even the animistic forms of worship of these tribes have been made subservient to the Brahmanical Hindu trinity of Ishwar, Vishnu and Brahma! Many times we see dalits giving up their primitive superstitions and replacing them with the Hindu ones to keep in line with their ascent in social or economic order. The Hindutwa gang also plays a large role in this, as they too wish to have a uniform so-called Hindu culture, throwing aside all the diversified worship forms which are all then classified as Hindu rituals!

It was a great pleasure to see the couple, Mrs. and Mr. Seetharam, donate books to these deprived sections. It is a rare thing in this area that people donate for a purpose such as this. Most of the donations are for religious places. causes and to promote all sorts of superstitions and communalism. The program was conducted by two organisations- the Committee for Struggle for Rights of Dalits and the Coordination Committee for Rights of Karnataka Adiwasis. It is our imperative to ensure that our movement work in collaboration with such organisations, as the Dalits are the most exploited victims of the superstitions of our society.