The great Indian middle class is confused as usual, and in search of role models and icons to worship. After paying homage to those like Ambani who brought the stock market to them, to the politicians who brought the ‘world class’ cars, TVs and mobile phones to them, they are now in search of newer ones. Where do you find them? The flavour of the season is now corruption – the battle gainst this all time evil monster! This is in addition to others such as nationalism, spirituality and yoga, not necessarily in that order.

After having tried to convince ourselves that the best technology in the world has come from the Puranas, including things such as aircraft, television, mobile phones, atom bombs, etc., all having been in existence right from the time of Ramayana and Mahabharatha, cow’s urine being a panacea for 440 diseases, making ourselves the laughing stock of the world, we have now come to the latest icons that are to deliver us from the evil politicians, bureaucrats and the entire corrupt establishment  that sucks on our blood and preys on our flesh!

One can recall that this is the same middle class that gets outraged when their maidservant demands 100 rupees more per month, the watchman of the flat wants a yearly increment, or the dhobi who washes their clothes asks for 1 rupee more per garment! These very same class who dont mind the influence of Rajukaka at the registrars office to get their undervalued plot registered, Garge uncle’s pull to get a seat for Pinky at the kanvent iskool and so on!

The funniest part is that all these have jumped on the same band wagon- that is the anti corruption drive! Yes, I mean the trio of squeaky-clean, single, spiritually-inclined heroes of the times – Anna Hazare, Ram Kishan Yadav and the double Mr. Ravi Shankar, who are the leaders that are going to deliver us from the evil that surrounds us. One of them, Satya Narayana Raju, aka Satya Sai Baba, is no more. His devotees, many of whom are middle class, are in wait for a reincarnation. It does not matter that they have no economic policies, their world-view is limited, and their agendas are too simplistic to work out and the very integrity of their icons. They are in need of heroes to worship and shall have them. The same middle classes that fudge their accounts, avoid paying taxes, not mind paying ‘something’ to the govt. servant who will look the other way when they dodge taxes or add an illegal addition to their buildings, are now out in the streets to support someone who is going to lead a battle against ‘corruption’. They are out to bring the money languishing in Swiss banks, bring about a lokpal bill, and in-fact, clean the Augean stables of the corruption that is the bane of the society today.

Well, that thought takes me back to my younger days when, as an idealistic young man, I was a staunch opponent of the emergency imposed by Indira Gandhi and Co. Our aim was to see that she was voted out, and we followed the leadership of Jayaprakash Narayan popularly called JP. It was a case of do or die and she was voted out of power. But, what followed was mayhem and the emergence of a faction that had been totally irrelevant upto then- the Hindu right wing elements under the patronage of the RSS. From the fringes, where it was a party of traders, loony sadhus and such it came to center stage with very important portfolios in the cabinet in their hands! The doddering old man Morarji Desai was edged out by another one Charan Singh who never faced the parliament and was booted out in the ensuing midterm election, which resulted in Indira Gandhi coming back to power.

The subsequent assassination and the anti-Sikh pogrom which followed was soon forgotten when another icon of the middle class came to rule – Rajiv Gandhi – the squeaky clean pilot turned reluctant politician who wanted to take India to the 21st century. He managed to do just that with the Bofors gun scandal which was in double digit crores – probably the daily collection of a medium level politician today. That icon collapsed, a new one emerged – V.P. Singh, a cabinet minister of Rajiv Gandhi who resigned and mobilised the masses. The new middle class idol – the anti corruption idealist. He managed to become the Prime Minister of India with the support of the entire anti-Congress opposition which included the BJP – the representatives of Hindu right-wing politics in its latest avatar. However, the honeymoon was short-lived with V.P. Singh’s Mandal card and Advani’s Rath Yatra. So, that was the end of another middle class hero.

There were some small timers in-between, like T.N. Sheshan, the astrology enthusiast turned security advisor who took his role as the chief election commissioner very seriously and was even tipped to be a future president. Then came Atal Bihari Vajpayi, who, although was a politician, was supposedly very clean and a bachelor to boot. Somehow the great indian middle class associates marital status with corruption as if an unmarried person cannot be corrupt by any means.Now we come to our present times and our current middle class icons. The great Indian middle class, in desperate search of icons, has now finally found their heroes – people in politics, beaurocracy, industry, business and all such mundane pursuits. And let’s not exclude spirituality and sports! There we have heroes who have ‘transformed the nation’ by scoring century after century, and more importantly earned crores by promoting tooth-enamel-dissolving colas and obesity-inducing-potato chips! Well of course, the same scrutiny could be applied to the heroes and heroines of the cinema, especially those advertising everything from superstition-promoting-gadgets to  those products that ‘whiten’ dark skins!

Who are our present icons? Well we have the diminutive, khadi wearing Anna Hazare – the brand new middle class Messiah! it does not matter that his views on many things are antediluvian, his solutions very simplistic and his judgement questionable. The middle class is looking up to him to solve their problems. Of course, he is surrounded by members of a ‘civil society’, some of whom do have a clean reputation. But the sources of the father-son lawyer duo’s income have been questioned. The ex Supreme court judge turned Lokayukta’s political connections may be with a party in power in quite a few places, and his family can collect capitation fees from students in educational institutions! While the icon chooses to lie down in fast unto death under an image of a flaming Bharat Mata associated with a particular communal political ideology, he claims to have none and all the so called politicians who wanted to ‘take advantage’ of the situation were chased away! But, he got support from people like the pogrom organiser Narendra Modi, the ‘honest’ politician Yaddiyurappa and such, while those of the corrupt congress party and its supporters turned the heat on him by asking many inconvenient questions!

Let us take a look at some of the other middle class icons who came to support him and were NOT ‘chased away’ by his supporters. We have the bearded contortionist Ram Kishan Yadav, aka Baba Ramdev, who has solutions for all problems of the middle class, whether it be a pot belly or the money stashed away in Swiss banks. Well, the middle classes don’t mind, their own black money stashed away as those crisp bundles stored under beds, the unaccounted gold in the bank lockers, but are very much disturbed by the black money is Swiss banks stashed away by corrupt politicians like Sonia Gandhi and her family! So is their icon Ram Kishanji. He has solutions like kapal bati and pranayam for all physical ailments. For the economy he has one single solution- bring back the money in Swiss banks and distribute it among all. Well, Ram Kishanji how about those thousand and odd crores you have made with your contortions and grants from the very same corrupt politicians whom you despise so much? As the Chinaman said when asked inconvenient questions- let us the change the topic! Speaking of social justice how about the sweat shop wages paid to the workers in your facilities that ‘manufacture’ those highly prized unproved concoctions called as Ayurvedic medicines? Well, well is it all for their welfare? If paid high wages, extra money in their pockets could result in over-consumption of rich food, which could cause problems like obesity for them. Better keep them on wages which will just keep their body and soul together! Following the example of Anna Hazare, he too has threatened to undertake a fast unto death with millions of his supporters! Nothing much has been heard of that as most of the thunder had been  already stolen by the previous fast unto death showman whose demands had been conceded to by a scared ruling combination. 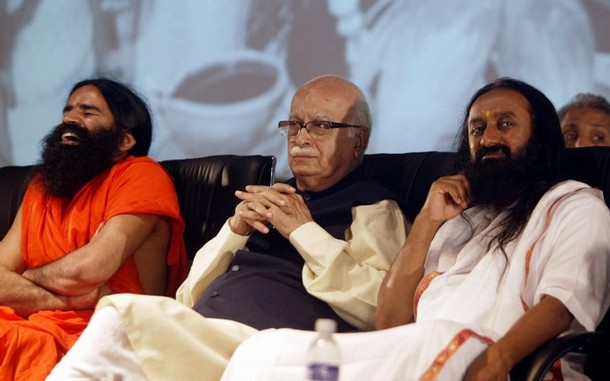 The other middle class idol who has thrown his weight behind Anna Hazare is the one who has patented breathing. He is none other than the bearded, squeaky voiced wonder with the two Sris appended to his name! While he has no qualms about taking state sponsorship for what he calls the ‘art of living’ from the govt. of Karnataka, which is not exactly known for its freedom from corruption to put it mildly, he has no scruples in inviting corrupt politicians from all shades of the political spectrum to his functions and taking grants from them, he has raised his voice against the evils of corruption. Well how about all the land illegally occupied by your so-called Ashrams? How about all those acres granted for building your so-called educational institutions? Corruption is only when these things are done by others!

We could go and on about these icons. I too was once a great believer in them and have now turned cynical after three decades of waiting for messiahs to solve our problems. My conclusion is that we do not need a messiah, even if people believe we need one desperately! It is necessary for us to undergo an evolutionary process by which the citizen becomes more proactive and conscious of his/her rights and duties. No icon or messiah is going to turn everything right overnight, however hard we may wish or pray for it! I dont think we have heard the last of these middle class icons – keep watching this space for more and more of them as years go by!